Ah, California: its warm climate and beautiful beaches; its militarized borders and endless wars. Wait, what? Well, America’s Golden State shares the former two aspects with the countries on the western edge of the Mediterranean. The latter two, however, are endemic to Israel and its environs.

“Israel (…) has been in the news all my life, but always seemed quite remote,” writes map creator trampolinebears, who lives in the Bay Area.

Tel Aviv is 7,400 miles (12,400 km) from San Francisco—halfway around the world (1). These parts of the world are not just physically distant; their geopolitics could hardly be more different. The Bay Area is part of a much larger, single polity with peace at home. Israel sits at the centre of a region rife with mutual suspicion, enmity and violence—not just between Israelis and Palestinians, but also with, between and within Israel’s neighbors.

That makes for a complex tapestry of shifting alliances and seemingly endless conflicts, a situation that may be hard to imagine on California’s pacific shores. Until you start frankensteining both geographies, that is: “Surprisingly, Israel turns out to fit the San Francisco Bay Area quite nicely, with the sea on one side and the mountains on the other,” writes trampolinebears.

“The distance from Tel Aviv to Jerusalem never meant much to me, but when I think of it as driving down 280 from Palo Alto to San Jose, it fits in my own experience. The Syrian civil war doesn’t seem so far away with ISIS-affiliated fighters in the hills over Vacaville.” 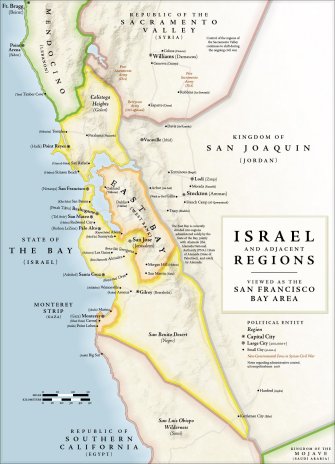 The map crams a bunch of new nations into the Bay Area, each corresponding to one ‘over there’. Local cities are linked to their closest counterparts in the Middle East. In look and feel, the map has a strong National Geographic vibe, for extra believability.

“It’s not a perfect fit: Israel is a few miles thinner at Ashdod and a few miles thicker at Netanya, and there’s no bay along the East Bay (West Bank), but overall I’m quite happy with how these two disparate regions of the world line up,” says trampolinebears.

If the map can help Californians relate to the conflicts in the Middle East, can it perhaps also do the opposite? Switch the coastlines and the political borders, reverse the brackets—Jerusalem (San Jose), etc.—and try to imagine the Middle East as a unified, conflict-free zone: at peace with itself and preoccupied with business and leisure rather than politics and war.

Map sent in by Martin Foldager. Found here on Reddit.

(1) If only in a colloquial sense. Since the Earth is an oblate spheroid (science-speak for ‘flatter at the poles, bulging at the equator’), the longest possible distance “halfway across the world” is half of the equatorial circumference, or 12,450 miles (20,035 km). The polar circumference is the shortest possible one; the two furthest points on this circle are 43 miles (70 km) closer together than along the equatorial one.

Related
Starts With A Bang
Ask Ethan: What are white holes, and do they really exist?
In General Relativity, white holes are just as mathematically plausible as black holes. Black holes are real; what about white holes?
Life
Strange life forms create an “alien” ecosystem in an abandoned uranium mine
Slimy biofilms made up of bacterial and eukaryotic life forms have taken over an abandoned, flooded uranium mine in Germany.
Hard Science
Earth has an eerie “sodium glow,” and astronomers use it to image stars
Air currents in our atmosphere limit the resolving power of giant telescopes, but computers and artificial stars can sharpen the blur.
Health
How saliva changes the flavor of food
“It’s a liquid, but it’s not just a liquid.”
High Culture
Why are flood myths so common in stories from ancient cultures around the world?
Could the prevalence of flood myths around the world tell us something about early human migration or even the way our brains work?
Up Next
Starts With A Bang
‘Volcanic Ash’ Isn’t Actually Ash
Whatever you do, don’t try to wash it away with water.Every few months, a volcanic eruption occurs on Earth, with lava flows and enormous plumes of volcanic ash.In 2015, the Chilean […]