In its short-lived attempt at existence, the US state of Absaroka (pronounced ab-SOR-ka) managed to acquire quite a few trappings of statehood: a governor and capital were selected, Absarokan car license plates issued, and there even was a Miss Absaroka 1939 (the first and only one). The King of Norway also visited, apparently – although he might not have suspected that it was a state visit.

On another continent or in another era, all this might have qualified Absaroka for total independence. But alas, in 1930s America, with its by then well-established administrative divisions, even statehood proved to be beyond the Absarokans’ grasp. And the fledgling state might have faded from history entirely, had it not been recorded by the Federal Writers’ Project, eager to include it as an example of cowboyin’ couleur locale.

That record was one of the sources for an article on Absaroka by New York Times journalist Kirk Johnson (‘A State That Never Was In Wyoming’, NYT, 24 July 08), which was kindly forwarded to Strange Maps by Ruland Kolen and Alex Meerovich. And that is how we first heard of Absaroka – a joyous occasion on a par with our first intimations of Amikejo, Stellaland, Imperial Texas, or any other of the ephemeral states that were discussed previously on this blog (Subcarpathian Ruthenia remains our favourite – independent for only slightly longer than the time it takes to pronounce its name). 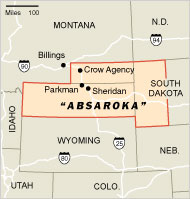 Absaroka means ‘children of the large-beaked bird’ and is the name given to the Crow Indians by their relatives, the Hidatsa. It also is the name of a local mountain range. Which is ironic, as the state’s unifying characteristic would have been its rancher culture, which obviously owes more on the horizontality of prairie than the verticality of mountains.

What kicked off the secessionist movement, was the independent-minded ranchers’ opposition to the interventionist New Deal proposed by president F.D. Roosevelt. Absaroka was to be composed of similar-feeling parts of Wyoming and two other states: Montana and South Dakota. The state was the brainchild of a group of aggrieved locals, but mainly of one A.R. Swickard, Absaroka’s self-appointed governor. The NY Times reproduced this map of Absaroka based on one sketched out by Swickard and his co-conspirators in Sheridan, Wyoming – the ‘capital’ of Absaroka.

“It was 90 miles of dirt road to the county seat. There was just nothing there. What Swickard did was exciting,” Mr Johnson quotes local resident Helen Graham (89). Things are really bad when secessionism is the only freely available form of decent entertainment. It remains unclear how serious the clamour for Absarokan statehood really was, or when and how it ended. Any additional information – including a higher-res map or a picture of Miss Absaroka (providing it’s from 1939) – would be greatly appreciated.

Update: Many thanks to Nate Pedersen, who recently wrote a piece on Absaroka for South Dakota Magazine, and was kind enough to send in these goodies:

A map from the Sheridan Press (d.d. Sunday 5 march 1939), detailing how ‘Absaroka’ the 49th State in the Union, was again proposed here Saturday as the outgrowth of a chide at the apparent lack of republican patronage committee appointments in this area. A.R. Swickard,city street and water commissioner, started it off with a petition for Sheridan county to join Montana, but since then has developed into the formation of a new state embracing the areas designated in the map below. 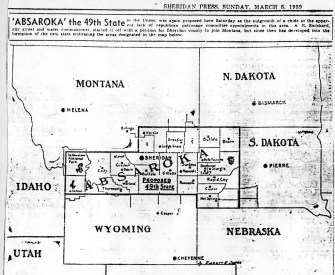 A large picture of Dorothy Fellows, a.k.a. Miss Absaroka  (on the left), in the company of A.R. Swickard, the ‘governor of Absaroka’, and Esther Aspaas. The ladies are holding the proposed flag for what would have been the 49th state. 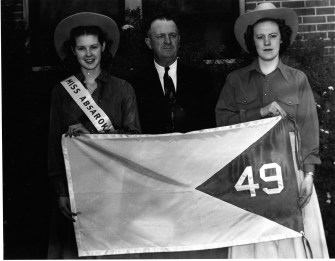 Many thanks to Mr Pedersen for sending in these pictures. Credit for providing them is due to the Wyoming Room at the Sheridan Public Library.

Looking up at the night sky gives us a glimpse of the Universe beyond our terrestrial concerns. Here’s what’s out there.
Up Next
Strange Maps

Niam Niam: the Cannibal Map of the World

Cannibalism is the ultimate yardstick for barbarity, and the ideal excuse to subjugate the accused