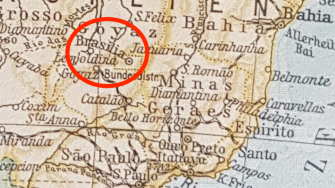 1920s map of South America, showing Brasilia, which was built only in the 1950s.

Last week, we reported on a cartographic mystery that had us baffled: a map of South America, dateable to the 1920s, showing Brasilia — even though work on Brazil’s planned capital only started in 1956. Short of plausible answers, we asked you. And fortunately, you’re cleverer than us.

The answers fall into two categories: 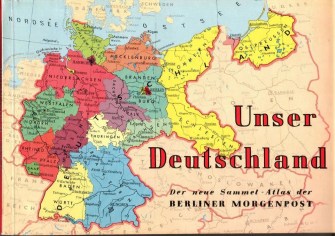 Let’s explore option one first. For starters, the inclusion of Weimar Germany (as a size comparison) in itself is not enough to conclusively link the map to the 1920s. West Germany didn’t formally accept the Oder-Neisse border (i.e. the eastern border of East Germany with Poland) until 1990, so many West German maps continued to show the 1919–37 border well into the 1980s.

So, if we imagine that the map is post 1956, that would explain why Brasilia is on it. But why the outdated borders throughout South America?

Theory one: the map is meant as a contemporary map, hence the inclusion of Brasilia, but it uses a much older base map, hence the older borders. Reasons? The publisher was lazy or dishonest; newer material was not available or too expensive. Here is a well-crafted story that merits inclusion in its entirety:

“The map was produced after 1960, as a partial update or re-release of an atlas from the 1920s. Perhaps the ‘nostalgia’ of an older map was a feature, for instance for a coffee-table book. When the intern tasked with preparing the map did a quick skim for major changes or errors, they simply checked for the presence of all the capital cities. Seeing that Brazil’s capital was missing, they added it to the map, and sent it off for printing.” 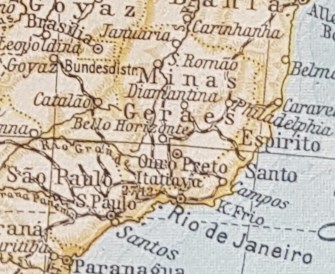 Is there something ‘off’ about the curvature and typeface of ‘Brasilia’?

I can smell the ink and hear the roar of the presses, can’t you? Some convincing-sounding clues for this theory:

Theory two: the map was an experiment, for scholarly or artistic reasons, to recreate a map of South America as it was in the 1920s — but the mapmakers forgot to erase Brasilia. Thus unwittingly leaving a temporal anomaly on the map for us to wonder over. 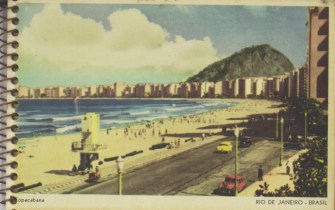 However, the majority of opinion — and the weight of historical evidence — points to the second option: the map does date from the 1920s, and there are good reasons for Brasilia to be where it is. Even though at that time Rio was still the nation’s capital, and the area now occupied by Brasilia nothing but wilderness.

Many countries throughout history have planned and constructed new capitals for themselves — from ancient Egypt (Akhetaten, 1346 BCE) to, most recently, the Pacific island nation of Palau (Ngerulmud, 2006). Brazil might be unique in the time it took the nation to build the darn thing. More than a century elapsed between the first mention of Brasilia and its inauguration as the country’s new capital. Here’s a thumbnail overview: 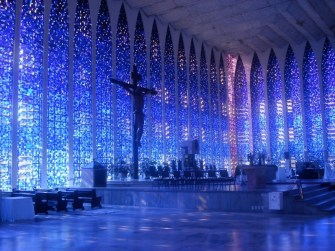 Don Bosco had a vision of a city where Brasilia is now. Here, the Don Bosco Sanctuary in Brasilia. 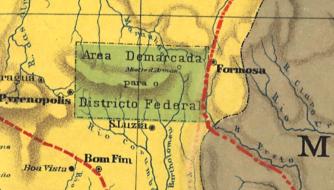 The Future Federal District, as shown on a 1913 railway map of Brazil. 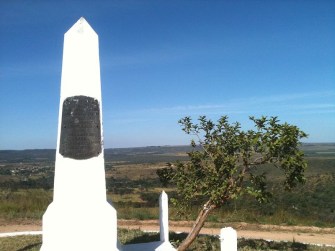 The foundation stone for Brazil’s future capital was inaugurated in 1922. 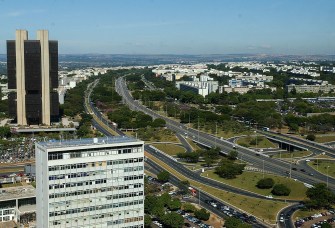 It is very likely that the map dates from 1922 or shortly thereafter, when it seemed — for a short while — that the project for Brasilia would finally be taking off. A further indication of this is that the Federal District included on the map is the perfect quadrangle measured by Cruls (and still current at the time), and not the smaller, asymmetric FD as was delineated in the 1950s.
Including the new capital may have been a way to “future-proof” the map — but it ultimately goes to show that mapmakers should stick to the facts on the ground. As a result of their miscalculation, Brasilia on the 1920s map turned out to be, as one reader suggested, “the biggest paper town ever.”

Reality is more distorted than we think.
▸
with
Big Think
Health

The risk of dying basically flattens after age 110.
The Present

A program in Brazil both helped and harmed. What can we learn from it?
Neuropsych

Why do holidays feel like they’re over before they even start?

In some countries, people want more freedom of speech. In others, they feel that there is too much.
Up Next
Health

Can Impossible Foods beat other brands — like Beyond Meat and Tyson — in the war to dominate the alternative meat industry?