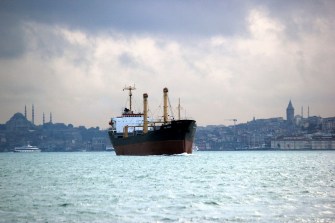 The freighter Ismael Mehieddine sailing through the Bosporus in 2014, with the Hagia Sophia (left) and the Galata Tower (right) in the background.Image: Julian Nyča, CC BY-SA 4.0

“It does not befit Turkey to think small or to act small,” Recep Teyyip Erdogan said last December, countering critics of his Istanbul Canal project. On this much at least those critics agree with the Turkish president: ‘Kanal Istanbul’ will have a huge impact on the megacity. For starters, it will unmoor the historical core of Istanbul from Europe, turning it into an island.

Whether as Byzantium or Constantinople in previous ages or as Istanbul today, the city on the Bosporus (1) derives its importance from that narrow waterway. The Bosporus separates Europe from Asia and connects the Mediterranean to the Black Sea. Istanbul is the only city in the world that links two continents and two seas. It doesn’t get more strategic than that.

That’s reflected by the strait’s special status. Signed in 1936, the Montreux Convention gave merchant vessels from any country free passage through the Bosporus. Navy vessels can also pass through, with some very specific restrictions (2). Only in wartime may Turkey pro-actively clamp down on maritime traffic through the strait.

That makes the Bosporus – at a certain point only 2,300 ft (700 m) wide – the world’s narrowest international waterway. Over the decades since Montreux was signed, it’s also turned into the busiest. In 1934, about 4,500 vessels crossed the strait. By 2017, that number had increased almost twelve-fold, to 53,000. That’s more than three times the number of ships that sailed through the Suez Canal that year (17,000), and more than four times the figure for the Panama Canal (12,000).

Plus, about one in five ships passing through the Bosporus each year is a tanker carrying hazardous materials. In 2018, that added up to 150 million tons of dangerous cargo. 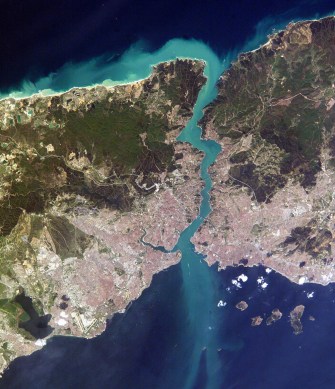 The Bosporus as seen from the International Space Station, showing coastal waters from the Black Sea carried into the Sea of Marmara. Image: NASA, Public Domain

Considering that average ship size has more than doubled since Montreux, and that the Bosporus is a natural waterway with 13 sharp curves, strong bidirectional currents and heavy traffic, there is always a risk of serious accidents – as shown by past incidents.

And the international shipping isn’t even half the story, for it doesn’t include local traffic: almost 2,000 ferry rides carry about 500,000 commuters across the Bosporus every day.

Smaller accidents happen regularly; to prevent the larger ones, the Turkish government has banned the night passage of tankers longer than 200 meters, among other measures. That doesn’t improve the waiting times for ships on either side of the strait, which sometimes have to queue for days before they can cross over. 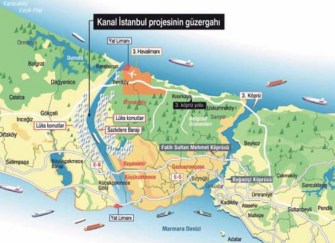 Overview of Kanal Istanbul and some surrounding projects, including the already inaugurated new airport (northeast) and the yet to be developed city around the canal (center).Image: Property Turkey

With traffic predicted to hit 86,000 ships by 2070, the evident solution is a new waterway, a second Bosporus: ‘Kanal Istanbul’. It must be said that Erdogan’s idea is hardly original. The first to float it was Suleiman the Magnificent (1520-22). The idea was subsequently adopted and abandoned by succeeding sultans at the regular rate of once per century: Murad III (16th c.), Mehmed IV (17th c.), Mustafa III (18th c.) and Mahmoud II (19th c.)

As if not to break the chain, four-time Turkish prime minister Bülent Ecevit revived the idea for an electoral campaign in the 1990s. Ideas of such historical persistence have a way of coming back until they are fulfilled (3), and indeed: Ecevit’s successor Erdogan, then still prime minister, reanimated the plan in 2011, for yet another electoral campaign.

In fact, the canal was one of three ‘crazy projects’ – Erdogan’s own words – designed to raise Turkey’s GDP to $2 trillion by 2023, the 100th anniversary of the Turkish republic. The other two were the world’s biggest airport, and a superhighway linking it to the city and beyond. The new Istanbul Airport opened last year. However, work on Kanal Istanbul has hit some delays.

The cost of the project, estimated initially to be $8-10 billion, has already been revised upward to $16.5 billion. A project this size creates its own weather, so to speak, even before it’s under way. Visions of a new city housing half a million people rising up along the canal have sent local real estate prices soaring. But Kanal Istanbul has also run into some tough headwinds: the project has a vocal and powerful opponent in Ekrem Imamoglu, who was elected mayor of Istanbul in 2019.

Imamoglu is on record as calling the project a disaster, treason, even “murder” – figuratively, of Istanbul; because the canal threatens between a fifth and a third of the city’s fresh water supply (4), places a physical limit on the city’s westward expansion, and increases the risk of flooding. In case of a catastrophic earthquake, the canal may make it harder to get help in and evacuees out of the city, which will effectively be an island. Not to mention that building the canal involves the destruction of vast tracts of agriculturally and ecologically valuable land.

The mayor seems to have most of his citizens on side, as a poll earlier this indicated 80 percent of Istanbulites are against the canal, with only 8 percent in favor. For Erdogan, that must sound like Gezi Park all over again. In 2013, plans to develop that Istanbul park, one of the relatively few green spaces left in the city, sparked demonstrations that morphed into a nationwide wave of civil unrest, directed against the policies of Erdogan’s government. The Kanal Istanbul project contains much of the same socially combustible material.

But since Turkey is a highly centralised state, there is very little even the mayor of Istanbul can do against a canal that will radically alter the geography of his city. Work on the canal, which was greenlighted at the start of 2020, will involve up to 800 people at any given time, and up to 10,000 people over the project’s entire lifetime. Erdogan has pledged use the national budget and if necessary, the national army to finish the canal.

The new canal would have a capacity of about 160 vessels a day, comparable to the Bosporus itself. Interesting for Turkey is that the canal will not be subject to the Montreux Convention, meaning that it will have full control over traffic on the canal – and will also be able to charge a fee. But who will want to pay when free passage via the Bosporus remains an option guaranteed by international treaty? Turkey may bet on shipping companies wanting to minimise delays (5). And if that doesn’t work, then perhaps those delays could miraculously start getting longer.

First, however, the canal needs to be built. As of now, no major excavation work seems to have been undertaken yet. And even when the project gets going, economic problems and/or social unrest may still throw a spanner in the works. But if the canal gets dug, then Erdogan will have succeeded where five sultans have not. And his name will be attached to an accomplishment pharaonic in scale, which may remain relevant when much else that animates this century has faded into history.

But perhaps Erdogan’s name will also be associated with a less flattering consequence of the mega-canal. Among the many objections to the canal that are summarily brushed aside by the proponents of the project, is the warning by marine scientists that Kanal Istanbul would upset the complex correspondence of water flows between the Sea of Marmara and the Black Sea. It could leave the former body of water anoxic – deprived of oxygen. That could mean that large parts of the city will be smelling of hydrogen sulfide – an aroma commonly identified with rotten eggs, and in future perhaps with past presidents.

One of the best-known allegorical depictions of love has a rather pessimistic male twin.
Up Next
Starts With A Bang

Are Any Stars Visible In The Night Sky Already Dead?

This is the Milky Way from Concordia Camp, in Pakistan’s Karakoram Range. It’s commonly reported that many of the stars we see in the sky have already burned out and […]