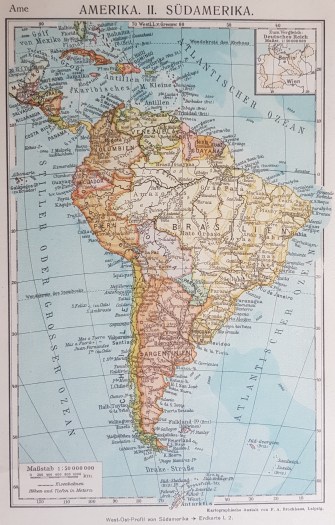 Old, but just how old? For map nerds, undated maps like these, with lots of obsolete borders, are where the adventure is.

Like all good adventure stories, this one starts with a map. Some time ago, Rob Cornelissen blew the dust off this one in a second-hand bookstore, and something clicked. Immediately, he knew he had to take it home. Even if the adventure the map promised was of a very different kind from the ones that happen to Indiana Jones. Instead of daredevil archaeology, think armchair cartography. In other words, the map is the adventure.

“It was a beautiful map of South America, by the looks of it from the first half of the 20th century. The reason it caught my eye, was because it was in German. The appearance of this highly un-German continent, covered with geographic names like Feuerland (Tierra del Fuego), Teufels-Insel (Devil’s Island, off French Guiana) and Allerheiligen-Bai (All Saints Bay in Brazil, in Portuguese: Baía de Todos os Santos), for some reason made it very appealing to me.”

Certainly adding to the appeal was the undated map’s potential as an adventure in itself. Depending on the broadness of the map-reader’s historical knowledge and the relative obscurity of the map itself, trying to figure out the exact date of an undated map can be a source of great frustration — and many times great satisfaction.

In the lower right, the map’s provenance is indicated as F.A. Brockhaus, Leipzig. One of Germany’s most prominent publishers, the company, founded in 1805, is still in operation. Since the map is taken from an atlas or encyclopedia rather than published on its own, it is not individually dated. The only way to figure out its year of origin is to examine the evidence on the map itself: Names of cities and countries, and the borders between them, as they have changed throughout history. 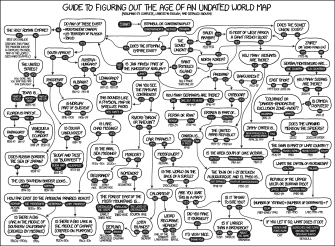 Guide to figuring out the age of an undated world map.

How to date a map

Subjecting a map to such forensic examination may never have occurred to you, but as a pastime it’s popular enough to have generated this obsessive and half whimsical flow chart to help you determine the date of a world map, but also to distinguish it from breadboxes, cats and seagulls. Some more relevant determinants:

While we keep waiting for the good people over at XKCD to turn this into the top-grossing board game of the Christmas season, let’s return to South America.

Make yourself a cup of tea while you find your magnifying glass and settle in for a cartographic autopsy that will produce a map mystery to baffle you. If not, maybe that’s because you have the answer to the question… 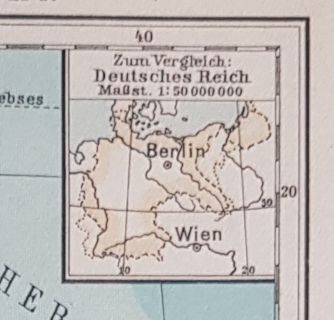 The second-and-a-half Reich, between WWI and WWII.

We ease into the job at hand thanks to the stamp-sized map of Germany in the top right corner. Placed there for the sake of size comparison, it also quickly and clearly puts outer age boundaries on the map. It can’t be older than 1919, Mr. Cornelissen argues, because “the borders shown are clearly those determined by the Versailles Treaty of 1919.”

Having lost the First World War, Germany was forced to cede territory to its neighbors. “The old possessions in Poland, France and Belgium are still shown behind a dotted line, as if it is hoped the loss of the territories might be a temporary condition.”

The country’s post-WWI borders would essentially stay the same until March of 1938, when Germany annexed Austria (the so-called Anschluss) and later that same year Sudetenland (the German-speaking border regions of Czechoslovakia). Neither of those changes is shown on the map, which with some confidence may be said to date from some time between 1919 and 1938. 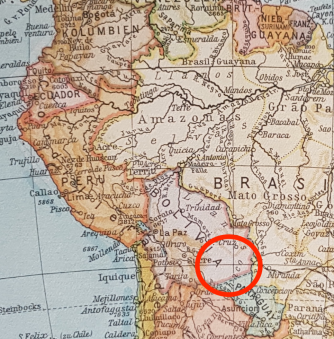 Oil was one of the motives of the war between Bolivia and Paraguay over possession of the Gran Chaco.

The War of Thirst

Dating a map within two decades on just one clue is pretty good; fortunately (for us), South America’s current borders are the result of “a bucketload of minor and major border conflicts and resulting border changes, well into the 20th century,” says Mr. Cornelissen.

“Take Paraguay, for instance. It is a lot smaller than it is now, indicating that the useless Chaco War (1932–35) with the Bolivians had not ended yet.”

Also called The War of Thirst (“La Guerra de la Sed”) because it was fought in the semi-arid Gran Chaco region, the Chaco War was the bloodiest conflict in South America in the 20th century, killing more than 100,000. Paraguay won, and obtained most of the disputed region in the peace settlement. The Chaco’s presumed oil riches were one of the main drivers for the war. However, the first commercially viable reserves of oil in the region were discovered only in 2012. 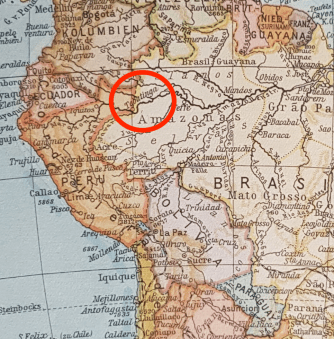 Map of border area between Peru, Brazil and Colombia before the Leticia Incident.

“Even better, the border between Colombia and Peru is from before the conclusion of the Leticia Incident of 1932–1933.”

Also called the Leticia War or the Colombia-Peru War, this nine-month, low-intensity territorial conflict claimed about 200 lives on either side, mostly from jungle diseases. Colombia sailed its navy up the Amazon to repel a Peruvian occupation of what it considered its territory. The Peruvians eventually withdrew undefeated.

Both countries reaffirmed an older treaty, which established Leticia as Colombia’s southernmost city. It’s not on this map, but it’s right next to the Brazilian city of Tabatinga, still shown bordering only Peruvian territory on this map. 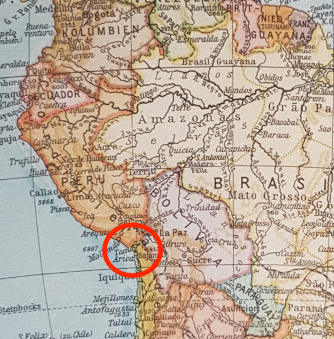 “And even better still is the fact that on this map, the city of Tacna still belongs to Chile,” Mr. Cornelissen enthuses. “The Chileans gained it from Peru in 1883 following the War of the Pacific but returned it to Peru with the Treaty of Lima in 1929 — making their country slightly less elongated.”

Also known as the Saltpeter War, the War of the Pacific (1879–84) saw Chile defeat a Bolivian-Peruvian alliance and annex mineral-rich coastal territories from both countries, in the process land-locking Bolivia. The 1929 treaty gave Tacna back to Peru, while Chile got to keep Arica.

Despite concessions granting Bolivia access to the coast via Chile, the loss of sovereignty over its coastal area has left a deep and lasting scar on the Bolivian psyche. 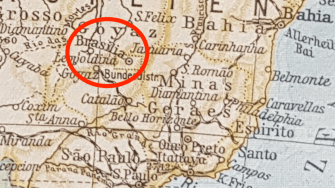 City out of time? A map of 1920s South America, showing Brazil’s new capital Brasilia, which was built only from 1956.

So, the return of Tacna narrows down the time frame for this map to the decade from 1919 to 1929. A nice piece of map sleuthing so far, but nothing out of the ordinary. Until you focus on the Brazilian state of “Goyaz” (an older spelling; current name is “Goias”). It is perforated by a rectangular zone, labelled Bundesdistrikt (‘Federal District’). Contained within it is a fairly large city, called Brasilia.

Yes of course, you might think: that’s the correct location and name of the capital of Brazil. But, as Mr. Cornelissen accurately points out: “That city was only founded in… 1956!”

From 1763 until 1960, Brazil’s capital was Rio de Janeiro, a coastal metropolis. Being a port city was beneficial for trade, but it also meant that Rio was far away from the country’s huge interior. From as early as the mid-19th century, the idea arose to build a new capital, at a more central location inland. But those plans only came to fruition in the mid-20th century.

Fulfilling a campaign promise, president Juscelino Kubitschek – known colloquially as ‘JK’ – ordered a contest for the design of Brasilia in 1956. Construction started the same year and was completed in a mere 41 months. Brasilia was declared the nation’s new capital in 1960.

“In the 1920s, Brasilia certainly wasn’t “under construction” for Brockhaus to already put it on their maps — and certainly not as a major city, marked with a dot as big as Rio, Sao Paulo or Buenos Aires!” At that time, JK’s push to finally find the exact spot and the right design for Brasilia was still decades in the future.

“So… What is going on with this map? What am I missing? Either the location and name of Brasilia was known a lot earlier than is common knowledge these days, or” — Mr. Cornelissen suggests, “there is some weirder cause.”

Although the idea of a planned capital is much older than Brasilia, this map suggests that its exact location — and that of its Federal District — were already established decades ahead of its actual construction. In which case the dot on this map would have marked not a city, but forests or fields.

Alternatively, Brasilia is a city with magical qualities, and it can travel through time. Or is there another explanation? To quote Arthur Conan Doyle, by way of Sherlock Holmes: “When you have eliminated the impossible, whatever remains, however improbable, must be the truth.”

If you can solve the mystery, let me know at strangemaps@gmail.com. Plausible and/or interesting theories will be published below!

Map of South America kindly provided by Mr. Cornelissen. Flow chart for figuring out the age of an undated map found here on XKCD.

Paradoxically, we lose wars because the world is peaceful and the U.S. is powerful.
Health

The risk of dying basically flattens after age 110.
The Present

A program in Brazil both helped and harmed. What can we learn from it?
Up Next
Hard Science

The game of the gods

From Newton to today’s scientists, we’re only seeing part of the story unfold.