Is Universal Basic Income the Best or Worst Idea Ever?

It really depends on who you ask, as one European poll found out. 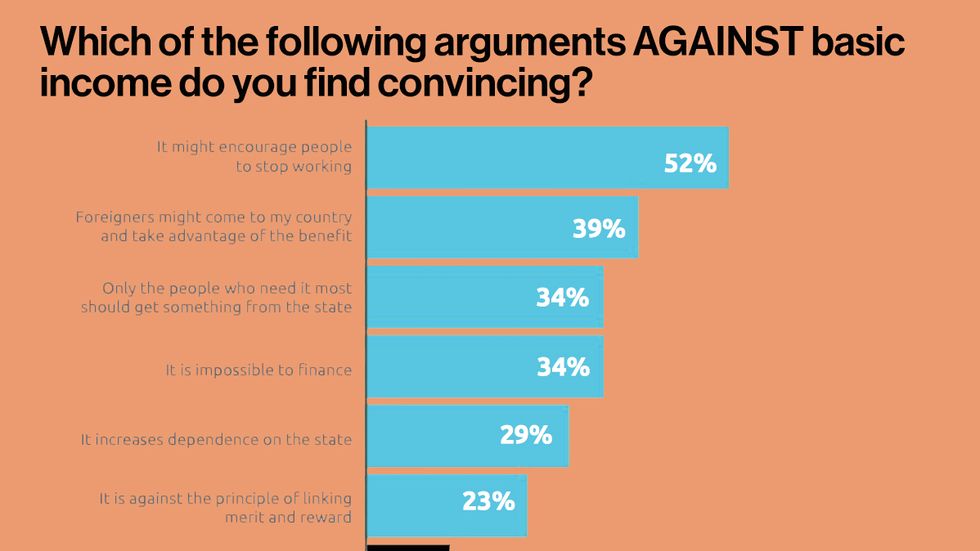 We've mentioned the idea of Universal Basic Income, or universal income guarantee, here before at Big Think. You might say that we enjoy mentioning it a lot. The idea goes back to the 1400s and has been taken up by many big thinkers throughout history, from Martin Luther and Martin Luther King to Thomas Moore and Milton Friedman.

But, what do the polls say? Do people actually want this, no matter what the experts argue?Support for the idea in the US was high enough in the early 1970s to prompt George McGovern to include it on his presidential platform, and for President Nixon to support a similar measure that failed to pass in Congress. Tests of the effects of the program were made in rural Iowa and North Carolina at that time.

More recently, a poll showed 68% of Europeans support the idea of a basic income, and 31% of them want it as soon as possible. However, 48% of those who support the idea want to see a successful trial run first. Although, despite these numbers, a referendum to introduce the basic income to Switzerland was crushed in a 77-23 percent landslide.

A rally in favor of the defeated Swiss referendum; there are eight million coins here, one for each Swiss citizen.

Well, that seems a little odd, given all the good you often hear about it. Why might people support, or not support the idea?

The simplest reason for the supporting the idea, and the one that 52% of interviewed people cite, is increased financial security. The freedom from having to work to merely survive is a powerful idea. When Canada tested basic income in the 1970s, this effect was seen quite clearly. The number of hours worked by the population was reduced, but it was shown that this time was often devoted to child care and increased educational opportunities.

On the political right, basic income is supported as the element which makes hypothetical models of ideal markets practical. Milton Friedman argued that the labor market is rendered inefficient by our need to work to survive, and that a variant of basic income would allow the job market to function more effectively. Many conservative supporters of basic income support the idea of the drastic reduction the bureaucracy that a single, all inclusive, welfare check would entail.

On the left, the support is behind the promise of the end of poverty, caused by bad luck, discrimination, economic cycle, or automation alike. This rationale was endorsed by Martin Luther King Jr, a supporter of the basic income, who stated that: "I am now convinced that the simplest approach will prove to be the most effective – the solution to poverty is to abolish it directly by a now widely discussed measure: the guaranteed income."

A final area of support is found in the futurist community. Those who suppose that the development of technology can and will render most of the current economy obsolete. They support the notion of a basic income as the freedom to invest time in culture, science, and the like in an age when work is increasingly automated. This would then lead to the flourishing of the individual, now free to learn, grow, and self-improve.

But there are objections to handing out large sums of cash to everybody. No less a man than FDR was opposed to the idea of a dole over guaranteed employment as a means to fight poverty. Saying, “The lessons of history, confirmed by the evidence immediately before me, show conclusively that continued dependence upon relief induces a spiritual and moral disintegration fundamentally destructive to the national fibre. To dole out relief in this way is to administer a narcotic, a subtle destroyer of the human spirit. It is inimical to the dictates of sound policy. It is in violation of the traditions of America. Work must be found for able-bodied but destitute workers.”

We also face the practical issue of implementation. While the benefits of removing nearly all of a national welfare system and replacing it by a single, simple, payout would be massive, estimates for the taxes required to pay for basic income show moderate required increases. They are in the 45 percent range in Ireland and the 40 percent range in the United States, if done as a flat tax. As people tend to not like higher taxes, this does present a practical problem for the implementation. The difficulty of removing an established bureaucracy must also be considered.

Attempts at implementation continue, with California planning to create a more limited program financed by taxes on carbon emissions. This program would be only a partial income guarantee, similar to the Alaska Permanent Fund. Finland’s massive pilot program carries on as well. Universal basic income is an issue that will define our time. Will we be the ones to abolish poverty directly and forever? Or will we be remembered as the cause of a great moral decay? Will we even enact the programs? All questions which must be answered in good time. Basic income stands as an intriguing idea of what we can do as a society, if the political will exists.