People like Thomas More, Abraham Lincoln, Franklin Roosevelt, and Bertrand Russell have already had many of the arguments we're having about basic income today. 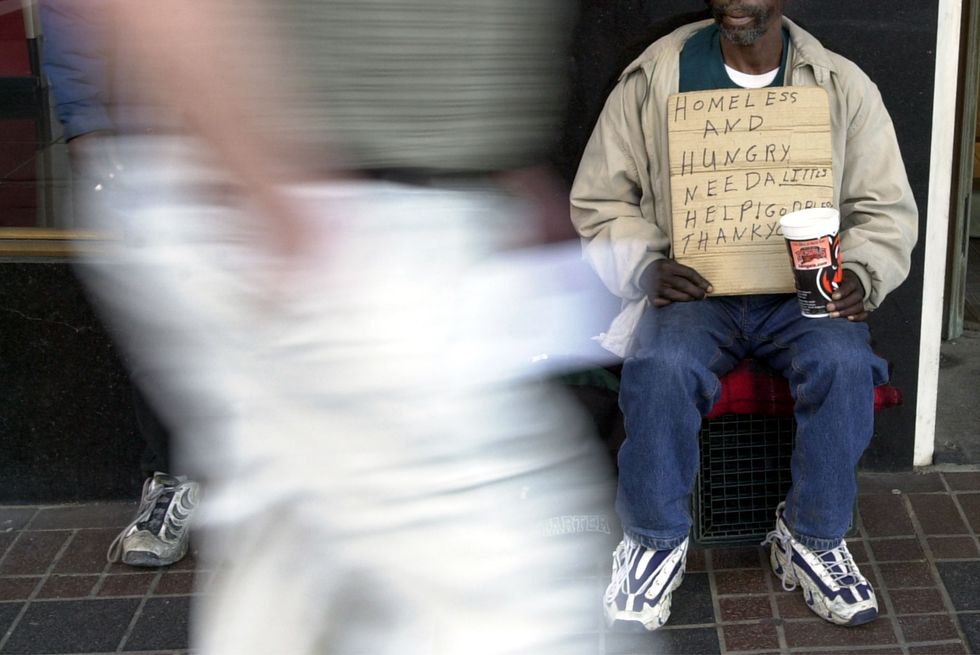 The city of Cincinnati is trying to come up with ways to combat the problem of panhandling, which keeps people from going downtown. (Photo by Mike Simons/Getty Images)

In Klein’s essay for the Green Institute, she walks through a 10-page outline of the many historical conversation surrounding UBI. It’s meant to be read as a taster, encourage further reading. Klein, a lecturer of Development Studies at the University of Melbourne, walks us through a sampling, discussing UBI through the lens of three themes present in conservations surrounding it throughout history:

1. Freedom: Freedom to live the way one wants, freedom from starvation, and so on.

2. Justice: A more equal and just society, especially for those doing labor that is unpaid but valuable. It’s a way to give back to everyone participating in our society.

3. Economic transformation: UBI is how we take our economy to the next level—it’s the next step in our evolution.

It’s important to note this idea has been argued by liberal thinkers, as well as conservative. Indeed, Y Combinator founder, Sam Altman once tweeted, “Important point: basic income is not socialism. Basic income provides a floor, and then people can get as rich as they want.”

One of the earliest instances of a proposed UBI can be seen in Thomas More’s Utopia, published in 1516. In it, UBI was proposed as a solution to stopping petty thievery, questioning the idea of punishment when the thief has no other choice but to steal.

“Instead of inflicting these horrible punishments, it would be far more to the point to provide everyone with some means of livelihood, so that nobody’s under the frightful necessity of becoming, first a thief, and then a corpse.”

What’s interesting is that many people assume that giving money to the poor is a fruitless labor. “They’ll just spend it on alcohol,” we say. However, when we review the evidence, we see how far it is from the truth. Unconditional cash transfers do not increase the rate of purchase of tobacco or alcohol among the poor. In many cases, studies have found it actually reduces these purchases.

British Labor Party member George Cole referred to an unconditional income as a social dividend. He saw the individualized nature of success troubling when success is something born of a society. According to Cole, there’s merit to the idea that wealth – the success of one – should be shared:

“Current productive power is, in effect, a joint result of current effort and of the social heritage of inventiveness and skill incorporated in the stage of advancement and education reached in the arts of production, and it has always appeared to me only right that all the citizens should share in the yield of this common heritage, and that only the balance of the product after this allocation should be distributed in the form of rewards for, and incentive to, current service in production.”

Perhaps the most recent and most urgent argument pushing for UBI is that wage labor cannot and should not be a basis for membership within our society. There are many non-traditional jobs from motherhood to volunteer work, which contribute heavily to the success of our society. But what’s most compelling is the idea that automation—robots—paired with waining job creation may leave many of us without wage work.

Throughout history there have been many pushes for adopting UBI. We are only just beginning to realize the real power this idea may have in providing a better future for everyone. Support is far from unanimous, but curiosity is alive: many countries are beginning to green-light trials, such as the Dutch city of Utricht, Finland, and Canada.