We’ve been here before. When books were the fresh new tech, Socrates believed they would spread an epidemic of forgetfulness. A millennium later, aristocrats fretted that the printing press would lead to mental overload among the masses. Then parents worried that calculators handicapped arithmetic skills and that e-mail would prove more harmful to IQ than pot.

According to a PBS poll, 53 percent of people believe that technology is making us dumber. Polling more than a thousand experts, the Elon University’s Imagining the Internet Center and the Pew Internet Project found that 42 percent believed “the hyperconnected brain is shallow” and maintains “an unhealthy dependence on the Internet and mobile devices.” And Nicholas Carr’s Pulitzer Prize finalist book, The Shallows: How the Internet Is Changing the Way We Think, Read and Remember, says it right in the title.

But the worry over digital technology’s place in the classroom isn’t just the latest flare up of mob technophobia. It’s fueled by high-profile events coinciding with the mass adoption of digital tech among students, leading to a strong associative relationship.

Education doesn’t happen on paper. It happens between people.

Consider Finland. At the beginning of the century, Finland’s education system gained renown as the best in the world. It was a top performer in the 2000 Program for International Student Assessment (PISA), scoring high in math and science and number one in reading. Educators flocked to the country to uncover its secret pedagogic spice.

But between 2006 and 2012, the country’s scores fell sharply while other top performers remained steady. Several theories have been proffered for the trend reversal, among them the increased adoption of “screen time” technology.

Girls generally read for pleasure more than boys, and PISA test questions lean heavily on reading comprehension. As such, the appearance of digital technologies among school-aged children may have “accelerated this trend” — with boys’ diminishing reading skills anchoring their test scores down.

Another high-profile example comes from the United States, where technology’s introduction into the classroom has been met with mixed results. As reported by the New York Times, Kansas students have staged sit-ins and walkouts to protest the use of Summit Learning Platform. Meanwhile, a Connecticut school district has suspended use of the same digital education system.

A personalized learning system backed by Mark Zuckerberg and Priscilla Chan, Summit Learning uses online tools to generate customized education aimed at promoting self-directed learning. However, some students have found the screen-focused lessons isolating and anxiety-inducing, while parents worry over the effects an untested system will have on their children’s mental development.

The letter states: “But lack of evidence does not give us ‘a pass’ to proceed without caution, and the truth is we have many clues that do not bode well when it comes to heavy uses of technology and our children’s educational or socioemotional wellbeing” and “there is no real way to assess his learning outcomes until this little experiment on our children is measured later, after the damage has been done.” 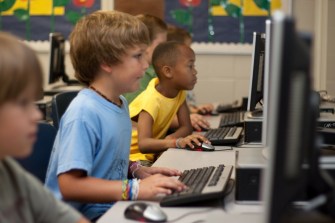 Examples like these have primed popular imagination to distrust digital technology’s role in our cognitive development and maintaining mental acuity. But some recent studies have complicated the issue.

“There have been so many books and articles about how we may be relying so much on technology that we are losing some of our cognitive abilities … but it hasn’t been well studied. I can count on one hand the number of people studying the lingering effects of smartphone usage,” Peter Frost, a professor of psychology at Southern New Hampshire University, told the Concord Monitor Report.

“The findings of this study suggest that, even in the rare cases where smartphones might alter cognition, this effect is likely transitory [and that] the mechanism by which smartphones initiate this temporary change remains an open question,” Frost writes.

“[Digital technologies offer] unprecedented power, but there are still many important questions about these maddening, valuable devices that we have been unable to answer. What is clear, however, is that many initial reactions have been more knee-jerk than evidence-based,” writes New Scientist consultant Douglas Heaven.

While the adoption of digital technology predates Finland’s score drops, there’s no direct evidence to suggest cause and effect. Another possible explanation offered by Shalberg includes Finland’s post-2008 economic hardships. And although Summit Learning touts a collaboration with Harvard researchers, it has not let researchers study its specific platform.

Is the Internet Making Us Smarter or Stupider?

In many ways, researchers studying digital technology’s effects on students face the same barriers as the nutritionist. Whether looking at diets that are digital or nutritive, it’s difficult to persuade people to change their lives substantially over a protracted period of time. How many people do you know that would freely renounce all digital technology in the name of science? Or parents that would assign their child to a digital regimen where the deleterious effects are unknown?

And even should people agree, they can’t be put in a lab for years to prove they stuck to the program. Our digital-laced reality means variables will creep into the data, and researchers end up relying on surveys to gather results.

None of this is to say that science can’t ultimately provide evidence-based answers; just that such evidence is tricky to suss out and that digital technology is new and changing rapidly.

This is the philosophy espoused by Cal Newport in his book Digital Minimalism, Douglas Rushkoff’s Team Human podcast, and websites like the Tech Edvocate. Some developers are also adopting this philosophy, such as the digital-learning platform Cerego.

Cerego’s adaptive-learning tools are designed to nurture learning and long-term retention. Students engage with the platform for cognitive work, but the lessons are spaced out to give their minds time to consolidate the information and to allow for non-digital learning experiences. The goal is to build stronger neural connections with the information, and approach it from multiple angles.

“If I offered you an ax, you could use it as a tool of incredible destruction, or it could be a great benefit to you,” Lewis said in an interview. “It’s all about finding the right tool for the right mission. But remember: you wield the ax, not anybody else.”

In a case study with Arizona State University’s Global Freshman Academy, astronomy and health-and-wellness students who used Cerego and completed all the course sets scored better than students who did not, suggesting improved retention of foundational knowledge. (Though, in keeping with our theme, these results are correlative.)

And we’ve been here before. When calculators became widespread in elementary schools, parents and pundits worried that they would irrevocably harm the students’ ability to learn mathematics. But math teachers chose to integrate them into the classroom with intentionality. Today, they teach students the “selective and strategic use” of calculators, improving not only math skills but reasoning and problem-solving skills in general.

As the evidence on digital technology continues to be cataloged, it seems the best approach is to consider it neither salubrious nor harmful. As such, the question shouldn’t be whether they make students stupid. It’s whether we are employing them in a way that deters or promotes mentally engaging activities.

Carl Jung was one such person.
Up Next
Health

The safest bet is to listen to health officials and avoid vaping products.