Parents and guardians have always endured a tough road. They are the providers of an entire human being’s subsistence. They keep that person feed, clothed, and bathe; They help them learn and invest in their enrichment and experiences; They also help them navigate social life in their early years, and they do all this with limited time and resources, while simultaneously balancing their own lives and careers.

Add to that a barrage of advice and reminders that they can always spend more money, dedicate more time, or flat-out do better, and it’s no wonder that psychologists worry about parental burnout.

But is parenting harder today than it was, say, 20 years ago? The Pew Research Center asked more than 3,600 parents this question, and a majority (66 percent) believe the answer is yes. While some classic complaints made the list—a lack of discipline, a disrespectful generation, and the changing moral landscape—the most common reason cited was the impact of digital technology and social media. 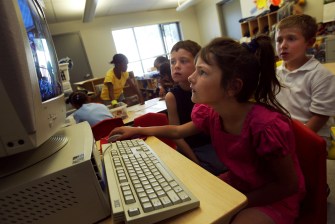 Parents worry that their children spend too much time in front of screens while also recognizing technologies educational benefits.(Photo: Chris Hondros/Getty Images)

This parental concern stems not only from the ubiquity of screens in children’s lives, but the well-publicized relationship between screen time and child development. Headlines abound citing the pernicious effects screen time has on cognitive and language development. Professional organizations, such as the American Academy of Child and Adolescent Psychiatry, issue warnings that too much screen time can lead to sleep problems, lower grades, weight problems, mood problems, poor self-image, and the fear of missing out—to name a few!

According to Pew’s research, parents—which Pew defines as an adult or guardian with at least one child under their care, though they may also have adult children—have taken these warnings to heart. While 84 percent of those surveyed are confident they know how much screen time is appropriate, 71 percent worry their child spends too much time in front of screens.

To counter this worry, most parents take the measured approach of setting limits on the length of time children can access screens. Others limit which technologies children have access to. A majority of parents (71 percent) view smartphones as potentially harmful to children. They believe the devices impair learning effective social skills, developing healthy friendships, or being creative. As a result, about the same percentage of parents believe children should be at least 12 years old before owning a smartphone or using social media.

But a deeper concern than screen time seems to be what content those screens can access. An overwhelming 98 percent of those surveyed say parents and guardians shouldered the responsibility of protecting children from inappropriate online content. Far less put the responsibility on tech companies (78 percent) or the government (65 percent).

Parents of young children say they check the websites and apps their children use and set parental controls to restrict access. A minority of parents admit to looking at call and text records, tracking their child’s location with GPS, or following their child on social media.

Yet, parents also recognize the value of digital technology or, at least, have acquiesced to its omnipresence. The poster child for this dichotomy is YouTube, with its one billion hours played daily, many before children’s eyes. Seventy-three percent of parents with young children are concerned that their child will encounter inappropriate content on the platform, and 46 percent say they already have. Yet, 80 percent still let their children watch videos, many letting them do so daily. Some reasons cited are that they can learn new things or be exposed to different cultures. The number one cited reason, however, is to keep children entertained.

For the Pew Research Center’s complete report, check out “Parenting Children in the Age of Screens.”

How does stress affect a child’s development and academic potential?

Perhaps most troubling, Pew’s survey was conducted in early March. That’s before novel coronavirus spread wildly across the United States. Before shelter-in-place laws. Before schools shuttered their doors. Before desperate parents, who suddenly found themselves their child’s only social and educational outlet, needed a digital lifeline to help them cope.

The COVID-19 pandemic has led many parents to rely on e-learning platforms and YouTube to supplement their children’s education—or just let the kids enjoy their umpteenth viewing of “Moana” so they can eke out a bit more work. With that increase in screen time comes a corresponding increase in guilt, anxiety, and frustration.

But are these concerns overblown?

As Jenny Radesky, M.D., a pediatrician and expert on children and the media at the University of Michigan’s C.S. Mott Children’s Hospital, told the New York Times, parents don’t always need to view screen time as a negative. “Even the phrase ‘screen time’ itself is problematic. It reduces the debate to a black and white issue, when the reality is much more nuanced,” Radesky said.

Radesky helped the American Academy of Pediatrics craft its statement about screen time use during the pandemic. While the AAP urges parents to preserve offline experiences and maintain limits, the organization acknowledges that children’s media use will, by necessity, increase. To make it a supportive experience, the statement recommends parents make a plan with their children, be selective of the quality of media, and use social media to maintain connections together. It also encourages parents to adjust their expectations and notice their own technology use.

“We are trying to prevent parents from feeling like they are not meeting some sort of standard,” Radesky said. “There is no science behind this right now. If you are looking for specific time limits, then I would say: Don’t be on it all day.”

This is good advice for parents, now and after the pandemic. While studies show that excessive screen time is deleterious, others show no harm from measured, metered use. For every fear that screens make our kids stupid, there’s a study showing the kids are all right. If we maintain realistic standards and learn to weigh quality and quantity within those standards, maybe parenting in the digital age won’t seem so darn difficult.

The internet has made it easier than ever to keep in touch with our exes. For people in relationships, that can cause problems.
Explain It Like I’m Smart

Augmented reality (AR) contact lenses will project the digital world into our retinas, perhaps helping us navigate the metaverse.
Neuropsych

Ask Ethan: How Old Are The Most Distant Stars We Can See?

Two nearby galaxies as seen in the ultraviolet view of the GOODS-South field, one of which is actively forming new stars (blue) and the other which is just a normal […]