Update Wednesday, November 20, 2019: Since March, vaping-related illness has landed over 2,000 individuals in hospitals nationwide, and at least 39 of those people have died.

Health officials have so far recorded about 1,080 cases of vaping-related lung injuries in the U.S., according to the Centers for Diseases Control and Prevention. At least 18 people have died across 15 states, and concern (and in some cases hysteria) continues to grow over the health effects of vaping. Still, it remains unclear exactly what part or chemical in vaping products is harming people, and no single product or ingredient has been linked to the hospitalizations (although some cases have been traced back to black-market vaping cartridges).

Last week, researchers at Mayo Clinic published a report in the New England Journal of Medicine describing the lung damage in some of these cases. The researchers — experts in lung pathology who examined lung tissue samples from 17 patients around the U.S. — said the tissue looked like it had suffered chemical burns, or even exposure to poisons like mustard gas, a chemical weapon from World War I.

“All 17 of our cases show a pattern of injury in the lung that looks like a toxic chemical exposure, a toxic chemical fume exposure, or a chemical burn injury,” Dr. Brandon T. Larsen, a surgical pathologist at the Mayo Clinic in Scottsdale, Ariz., told The New York Times. “To be honest, they look like the kind of change you would expect to see in an unfortunate worker in an industrial accident where a big barrel of toxic chemicals spills, and that person is exposed to toxic fumes and there is a chemical burn in the airways.” 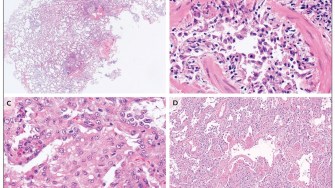 Larsen and his colleagues reported finding cell death and tissue damage in the airways, and within the lungs. This damage causes tissues to swell as the body tries to repair itself, but that swelling makes it difficult or impossible to breathe.

“The lung is not very functional when it’s been damaged and is trying to repair itself,” Larsen said. “There’s no reserve left while the body tries to heal itself, so people will be really sick, on a ventilator because they can’t get enough oxygen in, or carbon dioxide out […] Some patients will not recover, and will end up dying.”

The results suggest that it’s the chemical compounds within vape juice — and not necessarily the oils (vitamin E acetate, for example) – that are damaging the lungs. Of the 17 patients examined, all had vaped, and 12 had vaped marijuana or cannabis oils.

“So maybe we need to look more closely at the chemical compounds, and not just oils, but the chemical constituents, to figure out which ones are injurious,” Larsen told the Times.

The myriad of vaping products, both legal and illegal, makes it difficult to know what’s going on.

“One of the problems with vaping is that there’s so many products and materials and substances in the market,” Larsen said in a video published by Mayo Clinic. “With tobacco, there was only one culprit, and so it was very easy to get a good sense of exactly what the acute and long-term changes were on the lung from doing that. […] The same is true with marijuana smoking, in the traditional sense. It’s a single substance, and the types of changes are relatively predictable over time. But the sky’s the limit with vaping.”

For now, the safest bet is to listen to health officials and avoid vaping products, the researchers said.

Dr. Joel Smithers was recently sentenced to decades in prison for the numerous illegal prescriptions he gave out.