RIP: Rest In Pokemon (Yep, It's OK to Play in Cemeteries)

There are some who feel that cemeteries should be treated as sacred places and should be exempt from the Pokemon experience. There are others who feel that they want to catch a Pokemon right now. 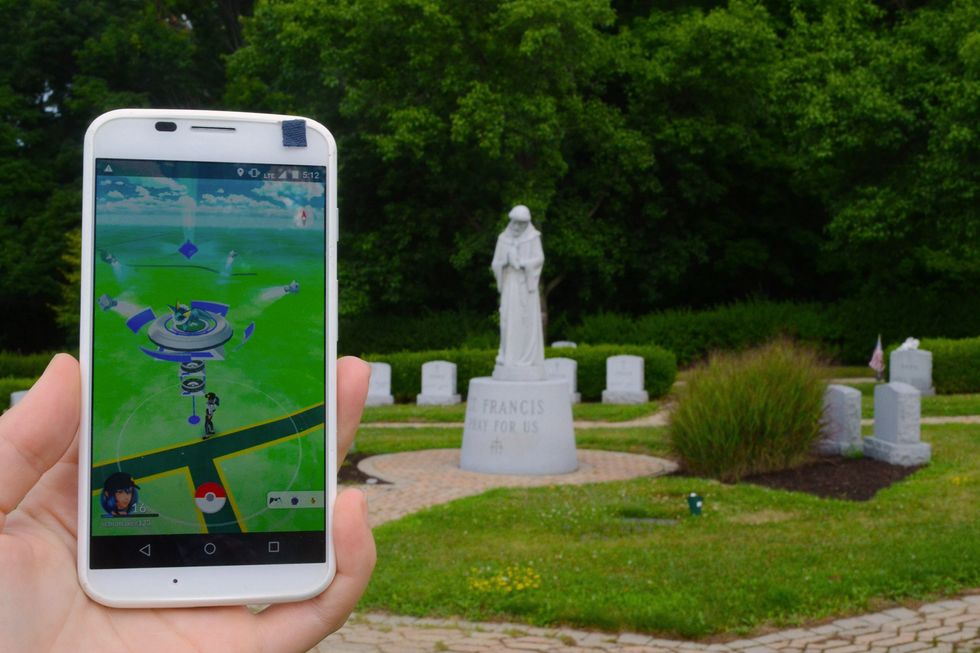 Playing Pokemon Go in a local cemetery in Johnson City, NY. The statue of St. Francis in this memorial park has been deemed a Gym in the augmented reality game. Photo Credit: Natalie Shoemaker

Pokemon Go has become an inescapable force. It’s difficult to step outside without bumping into someone playing the augmented reality game, even in cemeteries. There are some who feel that these memorial parks should be treated as sacred places and should be exempt from the Pokemon experience. But Keith Eggener, author of the book Cemeteries and Marion D. Ross Distinguished Professor of Architectural History at the University of Oregon, says Pokemon Go is just the latest complaint in a larger trend, which is seeking to bring new life to cemeteries.

“The thing is Pokemon Go is honestly at the late edge of a trend that’s been ongoing now for probably 20 years in a a lot of places. People have been going back to cemeteries for quite a while for a lot of reasons,” he says.

Overnight, Pokemon Go changed the way many people gather. Now, players are moving away from their couches, out the door, and to places where they my not have been before. Pokemon Go has to be played out in the real world, which has made places of note (e.g. historical landmarks, churches, government buildings, parks, and cemeteries) become places were players gravitate to in order to fill-up on in-game items or battle rival teams.

[Here’s a great introductory piece on Pokemon Go if you have yet to get up to speed.]

These places have become bustling meet-up spots where Pokemon Go players sit and hang out, or at least make a point to pass by. This transformation has been both a blessing and a curse for some places. Many small businesses have used Pokemon Go to increase sales, either by setting lures at nearby PokeStops to draw-in customers or giving out special Pokemon-related promos.

But many are starting to complain that cemeteries should be a no Pokemon Go playing zone. But if we consider the historical significance of cemeteries, we see they used to be full of recreation.

“They were quite important spaces for recreation as well,” Eggener said in a past interview with The Atlantic. “Keep in mind, the great rural cemeteries were built at a time when there weren't public parks, or art museums, or botanical gardens in American cities. You suddenly had large pieces of ground, filled with beautiful sculptures and horticultural art. These places became so popular that not only were guidebooks issued to guide visitors, but also all kinds of rules were posted.”

It was when people stopped dying at home in the mid 20th century, there was this shift in attitudes about death. Memorial parks would only be visited during funerals or during special dates. Likewise, people also became drawn to other points of interest. “We had museums and civic parks and things like that to go to instead,” Eggener says. “So, a lot of the old functions of cemeteries that were more social and more cultural functions that cemeteries filled as gathering places and ornaments of the city were no longer required of them.”

But over the past 20 years, people have been drawn back to these memorial parks for more than just mourning — there’s an entertainment value. “If you look at a cemetery like Spring Grove in Cincinnati, Wisconsin for 10, 15 years now they’ve had a calendar that’s just filled with actives from dog walking to concerts to weddings to botanical walks and historical walks, midnight flashlight ghost tours — things like that,” Eggener says.

These attractions have also received their fair share of complains. “Sometimes people have written-in about these things to their local newspapers and people find that these things are offensive or it’s a disrespectful use of the property, but then, at the same time, there’s an awful lot of people who like it.”

Eggener suggests that there needs to be a negotiation between communities—communities of survivors, local land owners, residents, cemetery management, and so on. It would be best if a common ground could be reached.

“Personally, I don’t have a problem with people playing Pokemon Go in a cemetery, so long as it’s not done in a vulgar way,” Eggener’s says. “After all, cemeteries have almost always been as much a place for the living as they are for the dead.”

It’s when people play Pokemon Go in places that are sacred for a lot of people — places built for reflection, like Auschwitz or Arlington cemetery, where people should put away their phones and pay their respects.