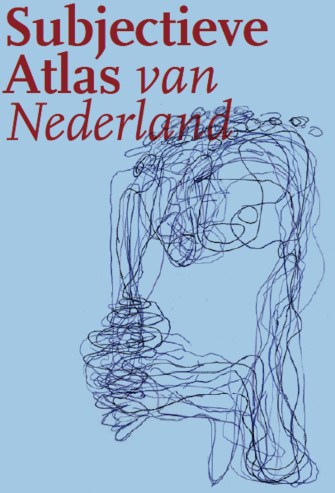 As a map-lover, this is not easy for me to admit, but: most atlases are terrible. Glorified road maps that could have been made by satellites with slightly varying interests. What if an atlas really – really – tried to reflect the place it depicts? Then perhaps you’d end up with something like this series of books.

Called “Subjective Atlases,” they don’t present a top-down picture, like most atlases do, but a bottom-up one: a mosaic made by people who actually live there, each offering an individual, original, and genuine take on what that’s like. What you get is a fuzzy, messy portrait that somehow feels more life-like than any neat collection of straight-lined maps could.

The series is edited by Dutch graphic designer Annelys de Vet, who published the first “Subjective Atlas” in 2003, and has since collaborated and workshopped with artists, designers, and other interested citizens of 12 locations around the world. Each atlas is a unique blend of perspectives, expressed in maps and photos, graphs, and collages. The latest atlas, on Luxembourg, was launched in October of last year.

Yes, we need road maps. And okay, some atlases are real pretty to look at. But their subjective cousins are a much better way to get a sense of the people who live in these places far and near – all more exotic than we thought. Here’s a small sample of the variety of perspectives offered in the Atlases. For more, go to the Subjective Atlas page. 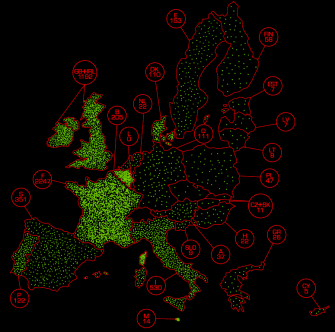 France reported nearly double as many UFO sightings as the UK and Ireland combined.Image: Subjective Atlas, reproduced with kind permission.

Are aliens really that different from other foreign visitors to Europe? Not really, as shown by this map of UFO sightings across the EU (after the accession of Poland, but before Romania, so 2004-2007).

That’s (western) Europe’s Big Five accounted for, but what about the smaller countries? Belgium is the clear favorite (205), followed by Sweden (153), Portugal (122), and Denmark (110). Surprisingly unpopular is Austria (37) and the Netherlands (22). And Luxembourg (0), you must be doing something wrong.

UFO sightings are noticeably rarer in eastern Europe: single-digit results in the Baltics, Slovenia, Slovakia, and the Czech Republic, and nowhere more than Poland’s anemic 47 sightings.

How come? The “Subjective Atlas of the EU” notes that the stats, provided by UFO investigator Larry Hatch, do not simply reflect sightings. Other factors are at play as well, in particular “the freedom of information, and the willingness of people to act on those freedoms.” 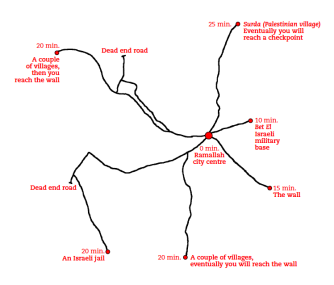 You can’t drive anywhere from Ramallah’s city center without hitting an obstacle within 25 minutes.Image: Subjective Atlas, reproduced with kind permission.

Located 10 km north of Jerusalem, Ramallah serves as the de facto capital of Palestine. In a slightly parallel universe, its location and function would make it an attractive destination and a desirable place of residence. In ours, however, Ramallah’s potential is sapped by the restrictions imposed by the Israeli occupation of the West Bank.

Although Ramallah itself is located in the Palestinian self-governing area (so-called Area A), the city is surrounded by Israeli settlements and hemmed in by Israel’s Security Wall. That can give city residents more than a touch of claustrophobia. As shown by this map.

If you get all dressed up in Ramallah, there’d better be something happening downtown. Because there’s nowhere else to go. 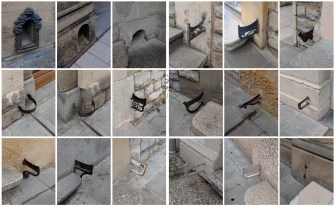 The “Subjective Atlas of Luxembourg” (the country) features two pages filled with photographs of mysterious objects found on the streets of Luxembourg (the capital city). Dean Baldwin, who took the pictures, explains:

“Living in Montreal, which receives more than two metres of annual snowfall, we are constantly dealing with the crud of the streets that we transfer from our exterior to interior spaces. In our homes we remove footwear as we enter, but in public places like the theatre we must all deal with the snow and slush frozen from our feet as it thaws. Seeing these boot scrapes in Luxembourg made me envy them.”

“Relaying my appreciation for these architectural protrusions, an actress recounted the story of how the phrase Bonne Merde (‘good shit’) is used in the theatre. I had always understood it to be an inverse of Good Luck, like the counter-jinx break-a-leg, used to wish the opposite of a bad thing happening.”

“But in the 19th century, when horse-drawn carriages were common, so too was horse shit in the streets. More carriages in front of the theatre meant more shit would come into the building on audience members’ shoes. After the show, with the crowd dispersed, all that remained was the shit. More shit meant a popular show, thus the goodwill expression: Bonne Merde!” 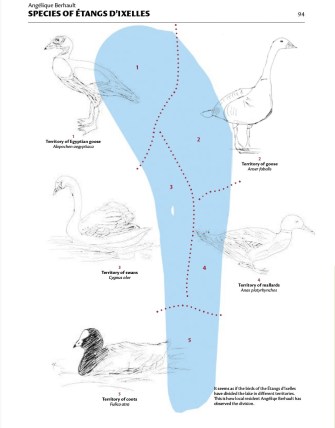 To each their own: an overview of the favorite locations of some bird species in the Étangs d’Ixelles. Image: Subjective Atlas, reproduced with kind permission.

Birds of a feather flock together. That’s why we have Chinatowns and Little Italies, rich and poor neighborhoods, hipster zones and religious enclaves. The principle also works for birds themselves, as observed at the Étangs d’Ixelles, two lakes in the south of Brussels, on the northern edge of the Bois de la Cambre (the local version of the Bois de Boulogne in Paris).

The map shows the lower of the two, and the preferred perches of some of the species that frequent the area, as observed by a local resident: 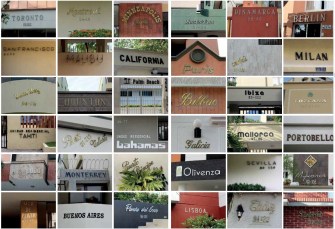 Names of residential buildings in the north of Baranquilla.Image: Subjective Atlas, reproduced with kind permission.

Location, as any real estate honcho will tell you, is everything. But what is ‘location’? It’s both inescapably objective, in a ground-beneath-your-feet kind of way, and as fluid and malleable as the fanciest flights of our imagination. Your feet may be stomping in the sticks, but with some helpful atmospherics – a nice memory, a good wine, the right song – you might as well be sauntering down the Champs Élysées.

This transporting effect is well known to city planners and – again – real estate people, and often used to amplify the appeal of the locations in their care. Hence the frequent references in street names to faraway, glamorous locations. Glamorous because they’re faraway, to be precise, as even the most renowned cities and countries often lose somewhat of their exotic appeal upon closer inspection.

The developers of Baranquilla are also quite familiar with the effect, as this sample will attest. These are the names of some of the residential buildings in the north of the city. Their inherent appeal is further spiced up with references to places whose names resonate with cosmopolitanism and class – at least from the perspective of a Caribbean port city.

The odd one out: Lulu (first column, second from the bottom). Isn’t that a person’s (nick)name rather than a place name? It is, upon further reading, in fact both: There are places called Lulu in Florida, Colorado, and Missouri. It’s a bay and a town on the Caribbean island of Navassa. An island in British Columbia – and another one in Abu Dhabi. And it’s the nickname of the German town of Ludwigslust.

Imagining locations can take you to strange places. Although perhaps not necessarily to Baranquilla. It would surprise us greatly if any of the cities or countries mentioned above had a street, a square or even a block of flats named after Colombia’s fourth-largest city. 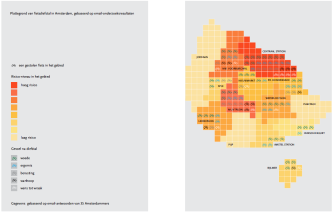 Worst places in Amsterdam to park your bike (or best places to steal one?)Image: Subjective Atlas, reproduced with kind permission.

The Dutch sure love to cycle. The Netherlands has more bicycles (23 million) than people (17.5 million). Together, they cycle about 15 billion km (9.3 billion miles) each year – that’s an average of 888 km (552 miles) per capita. Sure, there are plenty of good things to say about cycling. It’s a healthy alternative to driving. It’s better for the environment. It reduces congestion. And you generally don’t have a problem finding a parking spot.

But there’s a dark side to that cycling goodness; a yang to all that yin. Because the Dutch also love to steal bicycles. Bike theft is the most prevalent form of property crime in the Netherlands. An average of 1,500 bicycles are stolen each day, adding up to more than half a million each year.

Amsterdam is a hotspot of bicycle crime in the Netherlands and, according to this map, these are the bike theft hotspots in Amsterdam. Darker colors denote higher risk. Darkest red is the area around the Centraal Station. Also, you don’t want to leave you bike near Nieuwe Voorburgwal or at Muntplein. Leidseplein and Waterlooplein are risky propositions too. The safest areas, although surely that’s a relative concept, are Jordaan, Pijp and Plantage.

Based on a survey of bike crime victims, the map also indicates – using colored bicycles – how the victims felt when they noticed their steel horses had bolted: “anger”, “irritation”, “resignation”, “despair”, “vengefulness”. 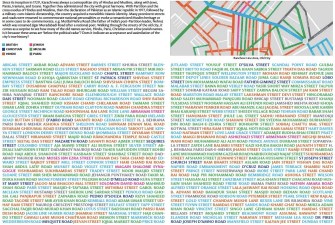 In the early 1700s, a woman named Mai Kolachi settles near the delta of the Indus River to raise her family, and a small fishing village named after her springs up around her house. Another story recounts that Mai Kolachi’s fisher husband is lost at sea in a heavy storm. Against the advice of the villagers and without their help, she sets out to find him – and she does. In her honour, the village is given her name. In another version, six of Mai Kolachi’s seven sons get eaten by a crocodile; the seventh kills the creature, after which the grateful locals rename their village after her.

Whatever the origin, Kolachi becomes Karachi, and the humble village turns into Pakistan’s biggest city. With 15 million inhabitants, it’s the seventh-biggest city in the entire world. It was the British who transformed the village into a fort, then a port, then a railway hub. But they were just one of the many ingredients that turned Karachi into a major trading, financial and manufacturing center. That happened thanks to a truly cosmopolitan mix of talents, contributed by Muslims and Hindus, Jews and Parsis, and many others.

Today, Karachi’s port handles almost all of Pakistan’s foreign trade. The city alone generates around 20% of the country’s entire GDP. However, cosmopolitanism has suffered following the Indian subcontinent’s Partition along religious lines in 1947. As the caption for this map explains, “the country acquired a monolithic Islamic identity. Many prominent streets and roads were renamed to commemorate national personalities or evoke a romanticised Muslim heritage or in some cases to de-commemorate, e.g. Motilal Nehru Road (the father of India’s post-Partition leader, Nehru) which was renamed Jigar Muradabadi Road after a national poet.”

However, many old names survive. The street signs in the old city reflect its origins, with names indicating a link with Karachi’s diverse heritage:

“Is it because these areas are ‘below the radar’? Does it indicate an acceptance and assimilation of the city’s true history?”

The quantum world is one in which rules that are completely foreign to our everyday experience dictate bizarre behavior.
High Culture

The larger truth on the streets is that no one uses just one drug anymore.
Thinking

Leftover Cold War-era bunkers are still kept in a state of readiness to protect the population from nuclear war.
Up Next
Health

Currently, more than 100 COVID-19 vaccines are being developed worldwide.