Bees have endured a disastrous half-century. In the winter of 2018, U.S. beekeepers reported losing 37.7 percent of their honeybee colonies. It was the largest die-off reported since the Bee Informed Partnership began its survey in 2006, yet in that decade, average winter losses of managed colonies were 28.7 percent. That’s near twice the historic rate and part of a 50-year trend of declining species richness in wild bees and other pollinators.

That’s bad news for the bees and also anyone who depends on the food generated through their labor. That is, all of us. According to the USDA, approximately 35 percent of the world’s food crops depend on animal pollinators to reproduce, with some scientists estimating that “one out of every three bites of food we eat exists because of animal pollinators.”

That many crops depend on pollination to reproduce is well-established; however, how much pollination proves a limiting factor to crop yield is less understood. If wild bee and managed honeybee populations continue to decline, will the amount of food available to feed us decline, too? That’s the question a Rutgers-led team of researchers sought to answer.

The research team selected seven crops to study: apples, almonds, pumpkins, watermelons, sweet cherries, tart cherries, and highbush blueberries. These were chosen because each is highly dependent on insect pollination for reproduction. The researchers then established a nationwide study across 131 U.S. and British Columbia farms. They selected only commercial farms in top-producing states—for example, Michigan and Oregon farms for blueberries. This way, their sample would represent the conditions and farming practices in which a majority of these crops are grown.

After collecting data on pollinator visitation rates and crop production, the researchers measured the data through three statistical models. They also analyzed the contribution differences between wild bees and managed honeybees as well as the economic value of the bees’ service.

“We found that many crops are pollination-limited, meaning crop production would be higher if crop flowers received more pollination. We also found that honey bees and wild bees provided similar amounts of pollination overall,” Rachael Winfree, a professor in the Department of Ecology, Evolution, and Natural Resources at Rutgers University-New Brunswick and the study’s senior author, said in a release. “Managing habitat for native bee species [and] stocking more honey bees would boost pollination levels and could increase crop production.”

Of the crops studied, apples, blueberries, sweet cherries, and tart cherries were hit hardest when pollination decreased. Watermelon and pumpkin yields weren’t as limited by pollinators, possibly because these crops sport fewer blooms and flower in summer when the weather is less inclement. Almonds proved the outlier as the crop is the earliest bloomer yet not pollination limited. The researchers speculate that this is due to the almond industry’s intense reliance on managed honeybees.

“Our findings show that pollinator declines could translate directly into decreased yields or production for most of the crops studied, and that wild species contribute substantially to pollination of most study crops in major crop-producing regions,” the researchers write.

For the seven crops studied, the researchers estimate the annual production value of pollinators to be more than $1.5 billion. They also found that wild bee species provided comparable pollination, even for crops in agriculturally intensive regions.

Their findings were published in the most recent Proceedings of the Royal Society B: Biological Sciences. 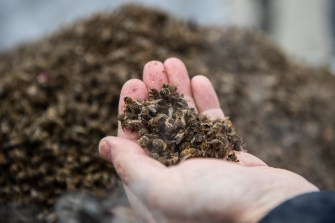 A protester shows a handful of bees that died by pesticides. The protest was held during the Bayer AG shareholder meeting in 2019.(PhooMaja Hitiji/Getty Images)

The concern extends beyond these seven. Crops such as coffee, avocados, lemons, limes, and oranges are also highly dependent on pollinators and may prove pollination limited. If declining bee populations are tied to such yields, it could mean barer supermarket shelves and increased prices. While that may only be an annoyance to some, to poor and vulnerable communities who already struggle to secure salubrious, affordable food, such a deficit would present another barrier to the vital micronutrients necessary for a healthy life and diet.

Unfortunately, the threats to bees are numerous. Parasites, agrochemicals, monoculture farming, and habitat degradation all play a role, and neither stressor works in isolation. Sublethal exposure to neonicotinoids, an insecticide, can cause impairments in bees, while monoculture farming serves up a monotonous and unhealthy floral buffet. Both impede bees’ immune systems, rendering them vulnerable to parasites such as Varroa destructor, a mite that can transmit debilitating viruses as it feeds on bees’ fat bodies. And all of these stressors will likely be inflamed by climate change in the years to come.

Some have proffered mechanical solutions, such as Japan’s National Institute of Advanced Industrial Science and Technology where technicians are developing robotic bees. These micro-drones are covered in gelled horsehair and have successfully cross-pollinated Japanese lilies. Other experiments include pollen sprays. However, the large-scale viability of tech-centric solutions seems questionable. After all, wild bees currently perform their ecological services pro bono and are as effective as managed honeybees. Any technological solution implemented in their absence would add to the agricultural costs and likely increase prices anyway.

Ecological amelioration will be necessary. To combat habitat fragmentation and strengthen biodiversity, many cities are implementing green-way strategies. For example, the Dutch city of Utrecht has decked its bus stop roofs with plants and grasses to create bee and butterfly shelters, while other cities are looking to foster bee-friend roadsides. And government initiatives incentivize farmers and landowners to adopt bee-friendly management practices. These solutions aren’t only a matter of ecological conservation but also food security and public health.

The English Department is instituting a series of reforms that cuts across the entire university.