Last week, New Jersey became the latest state to establish Juneteenth as a holiday. Support for honoring the day slavery ended was widespread, though a group of Republican Assemblymen abstained due to the “fiscal impact” another holiday would have on the state. Perhaps.

The government isn’t the only institution in my home state currently practicing self-reflection. My alma mater, Rutgers University, announced its English Department is going through changes. Namely, the department will deemphasize traditional grammar rules as part of a wide-ranging attempt to curb racism in classrooms, faculty spaces, and the university as a whole.

All six major units of the English department are instituting anti-racist policies, workshops, and initiatives beginning in the Fall semester. Some examples include:

The Writing Program is offering summer workshop sessions focused on responsive teaching in remote learning. In the Fall, students can attend workshops on social justice and writing. The department is rethinking “critical grammar” so multilingual speakers are not put at a disadvantage. The announcement states that this move “encourages students to develop a critical awareness of the variety of choices available to them w/ regard to micro-level issues in order to empower them and equip them to push against biases based on ‘written’ accents.” The 101 course will also include works by Ta-Nehisi Coates, Karen Ho, Michelle Alexander, and David Treuer in an attempt to diversify reading lists.

The Rutgers English Language Institute will continue developing courses in American and international identities, facilitate conversations on language rights as human rights, and launch a new website, “The Linguistic Landscape of Rutgers,” to increase awareness of linguistic diversity in the university.

Undergraduate English will require that English majors take a course in African-American Literature (more on this below). During the coming semester, the department is offering 14 such courses, including Black Speculative Fiction and Afro-Futurism.

Creative Writing will offer a class about reading and writing on race and require professors to take a workshop on creating an anti-racist classroom.

Graduate English is placing emphasis on course proposals that focus on the history of racial injustice in America, as well as initiatives that offer graduate students opportunities to work with prisons, public schools, and community organizations as a form of political activism.

The Center for Cultural Analysis has committed to working with and supporting Black-owned businesses, and will be sponsoring a number of new working groups, initiatives, and exhibitions around race, including the working group, “Slavery + Freedom.” It will also emphasize the experience of Asian students during the immigration crisis and the racialization of the current pandemic.

While these (and many more) changes appear exhaustive, such initiatives are generations in the making. The New Brunswick campuses have long been exceptionally diverse. (I’ll leave Newark and Camden aside in these examples). In 1995, we held numerous protests over racially-insensitive remarks by then-president, Fran Lawrence, which included blocking Route 18 while marching to his Piscataway residence, and a basketball court sit-in to bring awareness to the systemic problem of racism. There were also numerous “Take Back the Night” rallies and marches addressing systemic abuse and harassment of women, predating #metoo by a generation. 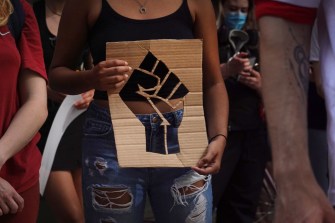 Demonstrators stage protest in the Loop before marching to the private residence of Illinois Governor J.B. Pritzker on July 10, 2020 in Chicago, Illinois.Photo by Scott Olson/Getty Images

Interestingly, I spent a few semesters in the English Department before switching to Religion. The best class I took while at Rutgers was “African-American Literature,” taught by the incomparable Guyanese-born scholar, Ivan Van Sertima. Instead of demanding we read numerous books and articles, Van Sertima assigned just one book—Ralph Ellison’s “The Invisible Man”—which we spent the entire semester dissecting and discussing. His approach was a breath of fresh air: going deep instead of shallowly skimming a breadth of literature.

Here’s why I left the department: African-American Literature did not count toward an English degree.

A quarter-century later, such a class is now required for an English degree. Seemingly little steps forward have real-world consequences, especially at an institution like Rutgers. A racially-diverse university does not guarantee racism-free campuses. In fact, Jonathan Holloway, who recently took the helm as Rutgers’ first Black president, is not shying away from calling out systemic racism.

Not everyone is happy about these changes, though the noise is mostly coming from conservative blogs. Their argument is predictable (hampering education) and ineffective. A contingent of American society seems perpetually concerned with an imagined “Golden Age,” which in this case translates as maintaining the dominant white, Europ

ean model of language. Their concern is relatively confined to prescriptive grammar that influenced Europe and America in the 18th and 19th centuries.

Linguistics evolved to investigate theoretical grammar in the 20th century, which is more applicable in the decision at Rutgers. The purpose of language is to communicate an idea. You can do this through pantomime, of course, but language has always been a living process, not an arcane museum piece. Different people use similar languages to communicate to their peers.

Grammar has suffered in the social media age. People’s inability to differentiate between there, their, and they’re and your and you’re is the source of constant frustration. I’ll fight for the serial comma until the end of my days. But when someone doesn’t use one, I generally understand what they’re trying to communicate. These are minor debates in a vast world of divergent speakers.

If the goal is communication, there are many ways to accomplish this. Consider Deborah in James Baldwin’s “Go Tell it on the Mountain,” who, replying to Gabriel, says,

“You hush, Reverend. It’s me that don’t never kneel down without I thank the Lord for you.”

And a little later,

“If she’d a-wanted a husband look to me like she could a just picked one out right here. You don’t mean to tell me she done travelled all the way North just for that?”

Such writing might not fit into traditional English grammar rules, but it certainly honors the living language that actual people speak.

We can look at Jamaican patois for another example. In the classic film, “Rockers,” Leroy “Horsemouth” Wallace makes the following speech:

“I and I don’t deal with violence. I and I is peaceful Rasta man. I don’t steal, cheat; I man serve Selassie-I continually. No matter what the weak heart say, I and I is like a tree plant by the river of water. Not even the dog that piss against the wall of Babylon shall escape this judgment. All of the youth shall witness the day that Babylon shall fall.”

If you’re not familiar with this patois, the meaning might take some time to convey. For the culture that understands it, this passage clearly states an important idea—and it’s entirely in English. Perhaps not the King’s English, but that’s in part what’s beautiful about America: there are no kings.

Mixed messages and competing interests have left college students feeling lost and stressed.
Up Next
Starts With A Bang

Hubble Reveals The Beauty And Mystery Of Saturn’s Rings