Every year since 2006, the University of Maryland’s nonprofit Bee Informed Partnership (BIP) conducts an annual survey to determine how many bee colonies were lost over the course of the year. The 2018–2019 survey asked 4,696 U.S. beekeepers to report how many colonies they lost, and the preliminary results of the survey suggest that things aren’t looking so good.

Of the more than 319,000 managed bee colonies in the survey, 37.7 percent were lost over the winter. This represents the largest die-off since the survey began, and a full 7 percentage points higher than the previous year. Having fewer honeybees is more than just an ecological problem, it’s also an economic one: Every year, honeybees contribute a nearly $20 billion value to U.S. crop production.

Bees are so integral to local ecosystems and economies that some states are paying residents to engage in bee-friendly practices. Minnesota, for instance, is paying residents to cover their lawns with bee-friendly plants such as creeping thyme, self-heal, and Dutch white clover; Virginia is giving away free beehives; and the vast majority of states offer tax exemptions for beekeepers. This is smart policy — without bees, grocery stores would be considerably emptier than they are now.

This particular winter die-off is part of a much larger trend; honeybee populations have been in a major decline for the last 50 years. There are a variety of reasons, each of which interacts with and compounds each other.

First, bee habitats are disappearing or changing profoundly. Many wild bees are losing their habitats, but managed bee colonies are also made to live in habitats that aren’t ideally suited to healthy bee populations. Many managed colonies exist on farmland or are brought to farmland to assist in pollination. As a result, honeybees feed on the pollen and nectar from just one or two kinds of plants. Biologist Dave Goulson and colleagues explained the impact of this in a research paper:

“If a human were to consume nothing but sardines one month, chocolate the next, turnips the month after, and so on, one could reasonably expect that person to fall ill. This may seem a frivolous example, but it is a reasonable parallel to the experience of some honey bee colonies, particularly those in North America that are transported back and forth across the continent each year to provide pollination for major crops such as almonds in California, blueberries in Maine, and citrus in Florida.” 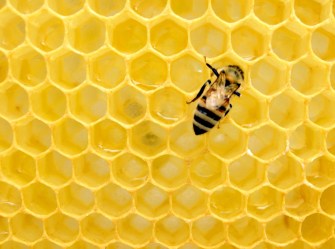 During the wintertime, bees are often supplied a single food source by beekeepers as well, such as corn syrup. This monotonous diet has been linked to a weakening of bees’ immune systems and to colony collapse disorder, in which the majority of worker bees abandon a colony along with its food, young, and queen.

A poor diet, in turn, makes bees more susceptible to parasites and diseases. There are several of these, but one of the most worrisome one is the Varroa destructor mite. The aptly named V. destructor can wreak havoc on bee colonies, primarily because North American bee species are not resistant to it. Varroa mites originated in Asia, and there they would have stayed if bee colonies were not shipped around the world.

V. destructor can be damaging to bee colonies first because they act as a vector for disease, especially deformed wing virus, an RNA virus that causes various physical deformities.

What can we do to preserve bee populations?

Fortunately, there’s plenty of ways we can strengthen bees’ resilience to these challenges. For one, we can plant bee-friendly plants, such as Minnesota is encouraging its residents to do, or plant semi-natural flower fields around farmland. We can also reduce our reliance on pesticides by implementing integrated pest management practices, or IPM. IPM considers the use of pesticides as a last resort and acknowledges that the complete eradication of pests is not feasible nor worth the effort.

Finally, stricter shipping policies can help prevent the introduction of harmful parasites like V. destructor to bee populations with no resistance. There’s plenty of actions we can take to help bolster bee populations. But if we don’t take action, the 2018 winter won’t be the worst one for U.S. bee colonies.

Tags
beesbiodiversitybiosphereconservationecologynatureplants
In this article
beesbiodiversitybiosphereconservationecologynatureplants
Related
Health
5 biotech trends to watch in 2023
From synthetic biology to xenotransplantation, biotech will continue to march forward in 2023, in part powered by data and AI.
The Present
Liberica, a rare type of coffee, could dominate by the end of the century
Goodbye, Arabica? Learn to love Liberica.
Life
How to make corn more like cactus
It’s an agricultural moonshot: Scientists hope to increase plant yields by hacking photosynthesis, the process that powers life on Earth.
Strange Maps
In 1882, a man wrongly drew a map. His mistake saved a forest of 300-year-old trees.
A 19th-century surveying mistake kept lumberjacks away from what is now Minnesota’s largest patch of old-growth trees.
Strange Maps
Newton’s apple tree has descendants and clones all over the world
Its apples taste bad, but institutions all over the world want a descendant or clone of the tree, anyway.
Up Next
The Future
If machines want to make art, will humans understand it?
Empathy is what allows us to understand works of art, right?