The fungus Pseudogymnoascus destructans was certainly well named. As it continues to spread across North America, the P. destructans has been precisely destroying a critical part of the ecosystem: bats. Between 2006 and 2012, the fungus killed 6.7 million bats. When it takes hold, the fungus kills between 70 percent and 90 percent of the bat population on average, sometimes completely eradicating a given colony.

No accurate estimates have been made for after 2012, but, if the trend has persisted, then the number is almost certainly millions more.

North America first encountered the fungus in February 2006 in upstate New York after a caver took a photograph of a bat with an unusually white, fuzzy nose. P. destructans primarily affects the skin and tends to cluster around the nose, giving the disease its common name: white-nose syndrome.

A group of bats with white-nose syndrome. Flickr user Government of Alberta

Why is white-nose syndrome so deadly?

Although the exact mechanism behind its lethality is unclear, researchers have found that bats with white-nose syndrome have skin damage, particularly on their wings. The infection also knocks bats’ physiology out of whack; infected bats have high levels of carbon dioxide and potassium in their blood, which affects their heart function.

The deaths, however, are most clearly linked to the odd behavioral changes that take place. White-nose syndrome only appears to affect hibernating bats, who normally don’t do too much during the winter. But bats with white-nose syndrome go into a flurry of activity when they’re supposed to be resting, flying around during the day in freezing temperatures. One study found that infected bats used twice as much energy as healthy ones, burning up the fat reserves they need to survive the winter.

Why do bats matter?

From a conservation perspective, any animal threatened with extinction is a tragedy. But what are the practical impacts of this plague? When we look at the role of bats in our ecosystem, their disappearance would have major impacts.

Bats make up a full fifth of all mammals on the planet. Fortunately, only hibernating species are affected by white-nose syndrome, but their disappearance would still wreak havoc on the ecosystem. Bats eat insects: In fact, a single little brown bat (which are affected by white-nose syndrome) can eat 1,000 insects in an hour. This service — which we currently get for free — is actually incredibly valuable to the agricultural industry. Were bats not around to eat these pests, it could cost the agricultural industry between $3.7 billion and $53 billion per year.

Not only that, but bats contribute to the spread of plant life. They distribute seeds from fruits and, alongside birds, bees, and other insects, serve as crucial pollinators. Three-quarters of our food crops rely on animal-mediated pollination, including many fruits and vegetables. Furthermore, pollinated plants are foundational elements of the food chain and provide habitats for other animals. If a large segment of the bat population were to disappear, it would have cascading effects for the rest of the ecosystem.

So far, the northern long-eared bat, the gray bat, and the Indiana bat have been listed as endangered or threatened with extinction due to white-nose syndrome. The population of little brown bats, previously one of the most common species in North America, is just 1 percent of what it was prior to the arrival of P. destructans. So, it’s clear there’s a major problem here. What have we been doing about it? 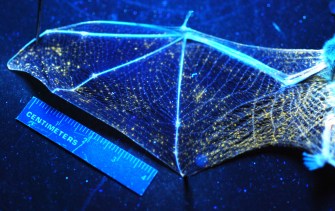 A bat wing under UV light. The orange specks are P. destructans, which causes white-nose syndrome.

Reasons to be optimistic

Fortunately, it’s not all doom and gloom. Researchers are hard at work trying to find a cure for white-nose syndrome, though no silver bullet has yet been found. Researchers Jonathan Palmer, Kevin Drees, Jeffrey Foster, and Daniel Lindner compared the fungus’s genetic code to some similar strains and noticed a glaring weakness. In an interview with the Washington Post, Lindner said, “[P. destructans is] something that has evolved for millions of years in the dark. Its ability to repair damage caused by UV light […] seems to be entirely lacking in this fungus. […] I’d go as far as to say it’s a vampire fungus. It doesn’t go up in a puff of smoke, [but] it’s gone down an evolutionary path so far that it’s really a creature of the dark.” They found that only a few seconds of UV exposure is sufficient to kill the fungal infection, but the problem is how to treat bats en masse in the wild.

Other treatments are looking at using antifungal bacteria, such as Rhodococcus rhodochrous, which has shown promise in preventing the P. destructans from gaining a foothold and has even reduced the amount of fungus on already-infected bats. But again, the issue is how to treat an entire species. And, even if some mass delivery system of UV radiation, anti-fungal bacteria, or another treatment were developed, there is always the risk that the treatment could be worse than the cure. Scientists are accordingly moving cautiously, not wanting to worsen an already bad situation. With any luck, though, the future will be one with bats in it.

Tags
biodiversityconservationdiseaseecologyenvironmentillness
In this article
biodiversityconservationdiseaseecologyenvironmentillness
Related
The Present
The “maritime Indiana Jones” who salvages shipwrecks now wants to tow icebergs
Simple physics makes hauling vast ice chunks thousands of miles fiendishly difficult — but not impossible.
Life
Strange life forms create an “alien” ecosystem in an abandoned uranium mine
Slimy biofilms made up of bacterial and eukaryotic life forms have taken over an abandoned, flooded uranium mine in Germany.
The Present
Climate change is altering the chemistry of wine
Smoke taint from wildfires is gross, even to wine amateurs.
Life
Our antidepressant drugs are affecting animals and ecosystems
A toxicologist explains the impacts of antidepressants on fish — and no, they’re not getting any happier.
Hard Science
200 years of exploring Antarctica
What we’ve learning from the world’s coldest, most forbidding, and most peaceful continent.
Up Next
Starts With A Bang
A Billion Years In Interstellar Space: What We Know Today About ‘Oumuamua
This is what we’ve learned from first object ever discovered to enter our Solar System from interstellar space.Billions of years ago, our Solar System was an extraordinarily different place from […]