An intriguing new study inspires a psychotherapist to blame strict parents for creating little liars. But is she right? 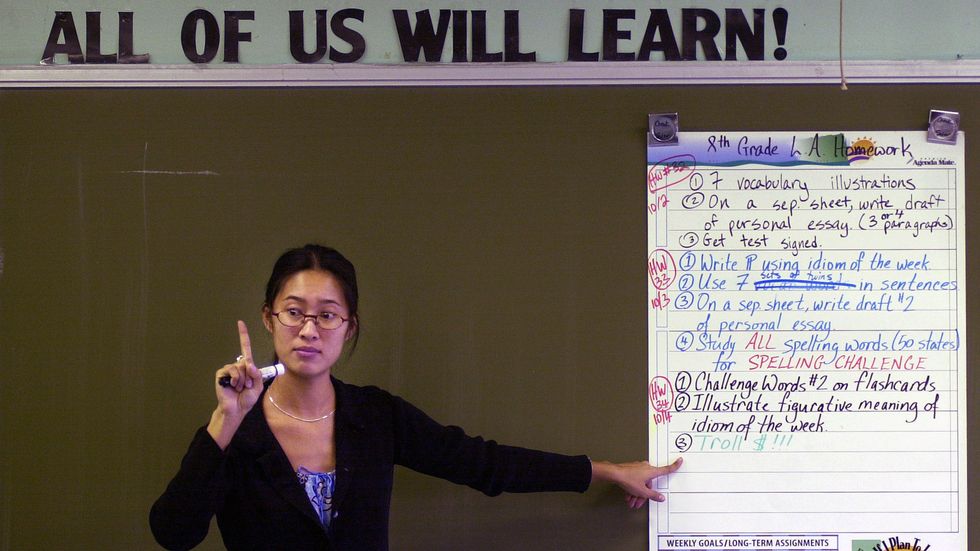 A teacher at KIPP Academy in the Bronx, NY — a school known for being strict and giving students 2 hours of homework each night. (Chris Hondros/Newsmakers)

The less forgiving a parent is of a lie, the more often -- and better -- their child lies

That radical statement was made by psychotherapist Philippa Perry on BBC Radio 4 this afternoon. According to Perry, parents who take a harsh, zero tolerance approach to lying in the home create an environment 'whereby the child does not feel safe telling the truth.' Worse still, by creating that environment those parents “co-create” the lie, as she explained: “If a child lies to get out of trouble then that lie is not all down to the child. It's a co-created situation.” That makes parents responsible for the lie “by not allowing a situation where children can tell the truth, parents can only blame themselves if they find out they have been deceived,” The Daily Mail reports.

Shocking as her claim sounds, it’s is backed up by the work of Canadian psychologist Victoria Talwar. Talwar created the ‘Peeping Game’ to measure how and why children lie. Talwar took students from two different schools in West Africa, one with a Western approach toward lying (ie - detention, time out, etc) and one with punitive punishments toward lying (ie - beatings as punishment). She put the children in a room with an object behind their back. She asked them to identify the object by sound only, and then stepped out of the room to see what they would do.

When she came back in, she asked the children what the object was and if they peeked. The children at the Western style school had a similar ratio of liars to children in Western schools. But the children at the harsher school? “[They] were very quick to lie and they all lied really, really well,” said author Ian Leslie, author of Born Liars: Why We Can’t Live Without Lying, about the study. “So actually by cracking down really hard on lying the school had become a machine for turning out very skilled and effective little liars.”

Striking as that is, Perry’s claims are a stretch. For starters, she appears to have drawn these conclusions solely from Talwar’s work. I found no evidence of Perry speaking to children or parents to replicate or confirm Talwar’s claims, and her work as a researcher doesn’t focus on lying or children. All of this makes Perry’s conclusions troublesome at best and specious at worst.

More importantly, children lying isn’t necessarily a bad thing. Slate explains that, “When kids lie, it’s not a sign that they’re on the road to delinquency – it’s a sign that they are developing important psychological skills.” Leslie fleshes out those skills in the BBC broadcast:

[Lying is] a tremendously accomplished thing to do because, first of all, they have to conceive of an alternate reality. They have to keep that in their mind and distinguish between both in order to lie properly, and then they also have to know what you’re thinking and what you know, and that’s the really clever bit.

A 2010 Canadian study of 1,200 children aged two to 17 confirmed this. Only a fifth of two-year-olds were able to lie. At age four, 90% were capable of lying.All that said, "the children are not going to turn out to be pathological liars,” said study leader Dr. Kang Lee of Toronto University. “Almost all children lie. It is a sign that they have reached a new developmental milestone. Those who have better cognitive development lie because they can cover up their tracks."

Perry points out more benefits in the BBC broadcast. She says that most early lies are for our own benefit, like getting out of trouble. By age 7, children learn that some lies are socially acceptable, like saving a friend from getting in trouble. Children also use lies to tell an emotional truth they can’t express any other way, like saying their teddy bear was sad. They even use lies to fuel their imagination.

Essentially, as researcher Alison Gopnik told us, “children are learning from just observing and participating in the everyday things that people are doing in an incredibly subtle and powerful way.” They essentially use lying as a way of exploring and defining the world around them, a world with complex shifting rules made by adults. If adults respond to that use of lying to enforce perfection rather than teach self-discipline, the results might be counter-productive - as Talwar’s study demonstrated. The best way to ensure that children use that lying tendency for good? Practice what you preach. Gopnik explains: “the unconscious things that you do when you're interacting with children are much more likely to shape and effect of the way they think than any of the things that you actually consciously decide to do.”

So parents: take Perry’s work with a hefty grain of salt. But if you still want to know when your child is lying, here are three ways to spot a liar.