For the last few years, researchers have become increasingly alarmed at the degree to which microplastics—bits of plastic that are smaller than 5 millimeters in length—have invaded, well, basically everywhere and everything. In 2018, a small sampling of eight people from around the world found that all eight of them had microplastics in their stools; another study that same year found microplastics up and down the marine food chain. Researchers in 2019 found them in 100 percent of the whales, dolphins, and seals tested. Now a new study has found microplastics in human placentas, meaning that humans are now being exposed to bits of petrochemical waste as early as the womb.

The new research is published in the journal Science Direct. 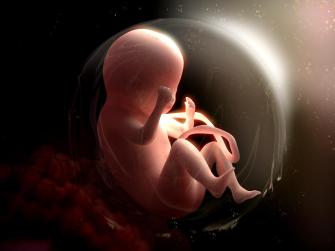 The authors of the Italian study collected placentas from six mothers. They did this in a plastic-free environment so as to avoid contamination. Doctors and midwives wearing cotton gloves performed the collection from mothers covered only in cotton towels. Metal clippers and scalpels were used.

The six placentas were evaluated using microspectroscopy. Samples from four of the placentas contained colored microplastics. A total of 12 pieces, between 5 and 10 micrometers, were collected — at this size, the contaminants were small enough to be carried in the mother’s or child’s bloodstream.

Considering that the samples constituted just about 4 percent of the organs, it’s reasonable to suspect that the researchers’ findings represent just the tip of the iceberg.

Four of the pieces were found in tissues on the maternal side, the outside of the placenta, and five were found in the space in which the fetus had been. The remaining three were located in the fine membrane wall surrounding the amniotic fluid in the placenta.

All of the microplastics were colored, dyed red, blue, orange, and pink, but beyond that the researchers were only partially able to identify the materials with greater specificity, writing, “All of them were pigmented; three were identified as stained polypropylene a thermoplastic polymer, while for the other nine it was possible to identify only the pigments, which were all used for man-made coatings, paints, adhesives, plasters, finger paints, polymers and cosmetics and personal care products.”

Understanding how the microplastics found their way in the mothers’ placentas is beyond the scope of the research, but there’s plenty of evidence that plastics are everywhere, from the products we use to the air we breathe, and so on. One study found that after babies are born, the infusion of microplastics begins right away— millions of particles a day are swallowed by infants drinking form plastic bottles.

The placenta plays a critical role in the development of a fetus, delivering nutrition and oxygen, handling waste disposal, and generally doing the job of keeping the fetus alive until its own organs develop enough to take over. The placenta also keeps the infant free of contaminants, or is supposed to, filtering out pathogens. It is also believed to be instrumental in facilitating the myriad chemical process involved in fetal development.

“Due to the crucial role of placenta in supporting the foetus’s development and in acting as an interface with the external environment, the presence of potentially harmful plastic particles is a matter of great concern. Further studies need to be performed to assess if the presence of microplastics may trigger immune responses or may lead to the release of toxic contaminants, resulting in harm.” — Ragusa, et al.

Study leader Antonio Ragusa, of the San Giovanni Calibita Fatebenefratelli hospital in Rome says, “It is like having a cyborg baby: no longer composed only of human cells, but a mixture of biological and inorganic entities.” He adds, “The mothers were shocked.”

Pando, which is Latin for “I spread,” is a single organism spanning some 106 acres.
The Future

Drones have a lot to learn from the landing abilities of birds.
Health

Scientists watch as mice mouse around an onscreen maze.