But there’s a more insidious reality to the Pacific Garbage Patch. It doesn’t concentrate our garbage in a central, easy-to-find location. Rather, the oceanic gyres disperse it across millions of square kilometers, whirling it wherever the winds and waves take it.

This reality makes the challenge of cleaning the Pacific Ocean daunting, to say the least. As Dianna Parker, from the NOAA Marine Debris Program, said on the NOAA Ocean Podcast: “We did some quick calculations that if you tried to clean up less than one percent of the North Pacific Ocean it would take 67 ships one year to clean up that portion.”

One major source of this pollution is lost or abandoned fishing gear. Because these nets, traps, and trawls are made of industrial-grade plastics, they will take hundreds of years to degrade. During the interim, they will continue to scour the oceans in large tangled masses, chocking the waters and killing marine life as they go.

To reduce this source of marine pollution, Cornell University chemists have gone in a counter-intuitive direction: They’ve created a new plastic. 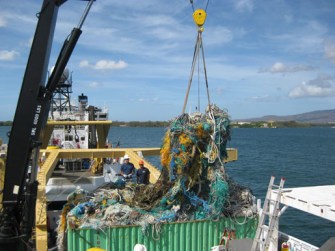 Commercial fishing nets are made of polymers that are strong but take hundreds of years to degrade.

A lot of hard work for (hopefully) nothing

The polymer is called isotactic polypropylene oxide, or iPPO for short. It was originally discovered in 1949, but for the past fifteen years, Bryce Lipinski, professor of chemistry and chemical biology at Cornell University, and his team have been iterating on the plastic and discovered a new polymer chain with some unique properties.

Their iPPO has a comparable ultimate tensile strength to nylon-6,6, a sturdy and strong polymer that can maintain stability under adverse conditions. For this reason, nylon-6,6 is used in zip ties, engine parts, industrial applications, and, yes, fishing nets and ropes.

Unlike nylon-6,6 and other industrial-strength polymers, however, iPPO can readily degrade under the right conditions—those conditions being any wit sunlight.

“We have created a new plastic that has the mechanical properties required by commercial fishing gear. If it eventually gets lost in the aquatic environment, this material can degrade on a realistic time scale,” Lipinski said in a release. “This material could reduce persistent plastic accumulation in the environment.”

To test their hypothesis, the researchers placed a 93 kilodalton (kDa) sample of their iPPO beneath an LED floodlight. The light exposed the sample to a stream of ultraviolet light with a wavelength of 365 nanometers—a wavelength range within the band of solar ultraviolet light that passes through the atmosphere to reach Earth’s surface.

After 30 days of constant exposure, the sample reduced to 21 kDa, or roughly a quarter of its original size. Control samples not exposed to ultraviolet light remained unchanged.

The team published their findings last month in the Journal of the American Chemical Society. 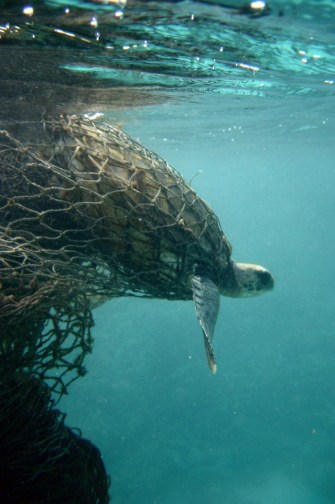 Fishing nets and ropes produced with such a biodegradable polymer could moderate a major hazard of today’s marine environments: ghost fishing.

Ghost fishing begins with lost or abandoned fishing gear. No longer under the control of fishermen, this gear, now known as “ghost gear” or “derelict fishing gear,” drifts as flotsam or settles on coastal floors where it continues to serve its function of ensnaring fish and other marine animals.

A meta-analysis published in Fish and Fisheries estimates 5.7 percent of all fishing nets, 8.6 percent of all traps, and 29 percent of all lines become ghost gear each year. The Global Ghost Gear Initiative estimates the annual poundage to be 640,000 metric tons.

While fishing gear is designed to target certain species, without a fisherman to control it, ghost gear captures animals indiscriminately. Non-target species can often be caught, including protected species of turtles, seabirds, and whales.

Once caught, they often succumb to starvation, predation, or even cannibalism. Their bodies then attract other animals hoping for an easy meal, who in turn become enmeshed, creating a deadly and self-perpetuating cycle so long as the gear remains unrecovered.

Ghost fishing wrests an economic toll, too. Beyond the costs of replacing lost gear, ghost gear also culls the populations of species fishermen depend on for their livelihood.

As Lipinski notes in the release, the goal of his research is to develop a polymer that leaves no trace in the environment. Such a breakthrough may not end the dangers of ghost fishing. Nets and traps would still seize animals before they biodegrade into nothing. But such a polymer would drastically lessen the time such gear could hunt on its wayward path.

If iPPO could one day reach that goal, it could vastly improve environmental conditions in our oceans. Volunteers collect rubbish from the Aegean sea to protect biodiversity.

iPPO may one day improve the situation, but it is hardly a silver bullet. The gyre that creates Great Pacific Garbage Patch also sweeps up vast amounts of tiny microplastics—most too small to be seen with the naked eye yet will still last hundreds of years. These join fishing nets and everyday plastic items that wash out into the sea.

“[T]he bottom line is that until we prevent debris from entering the ocean at the source, it’s just going to keep congregating in these areas. We could go out and clean it all up and then still have the same problem on our hands as long as there’s debris entering the ocean,” Dianna Parker said.

Again, the challenge is daunting. Yet many countries, institutions, and individuals are taking it head-on.

Last year, the Ocean Cleanup Project announced that its latest boom design was successfully capturing and collecting plastics from the Great Pacific Garbage Patch. The system uses the ocean’s natural currents to sweep debris into the boom. Once fully operational, the system will be able to return plastics to land for recycling.

The United Nations has set its Sustainable Development Goal #14 to target marine conservation. One of its goals is to significantly reduce all marine pollution by 2025, with an emphasis on preventing land-based sources.

And a recent study in Nature found that the situation isn’t hopeless. The researchers projected the recovery of damaged marine habitats by looking at past conservation interventions. They found that we could restore our oceans, resurrect dead zones, and reinvigorate marine species within 30 years. It would take a concentrated effort costing billions of dollars, but the potential rewards would be worth 10 times as much.

“Overfishing and climate change are tightening their grip, but there is hope in the science of restoration,” Callum Roberts, study author and marine conservation biologist at the University of York, told the Guardian. “One of the overarching messages of the review is, if you stop killing sea life and protect it, then it does come back. We can turn the oceans around and we know it makes sense economically, for human well being and, of course, for the environment.”

Bend it. Stretch it. Use it to conduct electricity.
Strange Maps

Being mortal makes life so much sweeter.
Up Next
Health