We don’t really know how many people have or have not been infected by coronavirus. Insufficient testing has left us largely flying blind, though there’s been a general suspicion among experts that the disease’s incidence is substantially underreported in what data there is.

On April 22, New York Governor Andrew Cuomo described the preliminary findings of a new series of tests his state is conducting. The tests seek to identify asymptomatic individuals who are carrying antibodies that indicate they’ve fought off COVID-19 or are currently doing so. So far — and there’s much more testing to be done — 13.9% of people tested positive for antibodies. That would suggest some 2.7 million New Yorkers have encountered the coronavirus. That’s 10 times the official tally. In New York City, the results are even higher — 21.2% of people tested have the antibodies.

This could mean that the coronavirus has asymptomatically moved through a larger chunk of the population than previously known, and that the death rate may thus be much less than previously thought.

Cuomo’s and others’ comments on the report

Cuomo discussed the report’s initial findings at a press conference. Since the study is ongoing, and the report itself not yet made available, his comments are the best information we have so far.

Said Cuomo, “We’re going to continue this testing on a rolling basis. We’ll have a larger and larger sample. But I want to see snapshots of what is happening with that rate. Is it going up? Is it flat? Is it going down? And [the antibody study] can really give us data to make decisions.”

Not everyone is convinced of the study’s value. NYC Health, for example, has raised warnings regarding the potential for false positives and negatives, and cites the remaining “void” in our knowledge of COVID-19.

The tests were developed by New York State’s Wadsworth Center lab, which asserts that it’s 93-100% effective at differentiating the current coronavirus from previous infections. However, the lab has not publicly rated its efficiency, or sensitivity, at delivering accurate positives.

On top of that, it’s always a good idea to resist drawing conclusions too quickly from any single study, and especially from one whose findings are so preliminary. Speaking with NBC News, Harvard epidemiologist William Hanage cautions, “There’s a risk of really serious misinterpretation here.” Nonetheless, “the most basic conclusion — that quite a large number of people may have been infected and are not turning up in the official case counts — that’s extremely plausible and something we have been suspecting all along.” 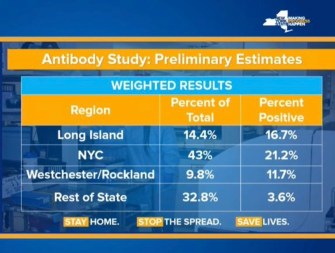 Blood tests were administered to 3,000 people across the state — in 40 locations and 19 counties — as they shopped at grocery and big-box stores. There’s therefore a certain degree of pre-selection in the sample so far. For example, people too ill or otherwise infirm to be out and about are not included in its results. This is one of the report’s limitations and a reason to wait before jumping to too many conclusions regarding its data.

The results so far also reflect the disproportionate impact of coronavirus of people of color. Statewide, 22.8% of multiracial individuals tested positive for the antibody, as well as 22% of both African-Americans and Latinos.

Tags
coronavirusdiseasehealth carenew yorkpandemicpublic healthscience
In this article
coronavirusdiseasehealth carenew yorkpandemicpublic healthscience
Related
The Well
The 3 “demons” that haunted legendary scientists
Darwin, Descartes, and Maxwell all believed in these science ‘demons.’
▸
7 min
—
with
Jimena Canales
Harvard professor debunks the biggest exercise myths
Exercise culture is crazy. But what you need to do is exceedingly simple.
▸
with
Daniel Lieberman
Health
Food expiration dates don’t have much science behind them
A food safety researcher explains another way to know what’s too old to eat.
Videos
NASA astronaut explains humanity’s trajectory to Mars
The first human that isn’t an Earthling could be in our lifetime.
▸
5 min
—
with
Robert Curbeam
The Present
Five key findings from the 2022 UN Population Prospects
Explore the key highlights from the UN’s latest release of its world population estimates.
Up Next
Starts With A Bang
This Is Why Space Needs To Be Continuous, Not Discrete
We might live in a quantum Universe, but we’ll violate the principle of relativity if space is discrete.If you try and divide matter into smaller and smaller chunks, you’ll eventually […]