Human childbirth is a relatively painful and complicated process in the animal kingdom.

Unlike other primates that are able to give birth unassisted, human mothers usually need help from their family or community to deliver a baby. Even with help, mothers and infants face a small chance of death during childbirth, especially in regions with limited access to healthcare, like Sub-Saharan Africa.

One reason human childbirth is dangerous is the “obstetrical dilemma.” This dilemma describes what seems to be an anatomical contradiction: Human infants have large heads, but their mothers have small birth canals.

It begs the question: Why hasn’t evolution made childbirth easier on humans?

A study recently published in Proceedings of the National Academy of Sciences proposes that human childbirth is difficult because of evolutionary trade-offs that ultimately help protect organs in the body.

The main trade-off for women centers on the pelvic floor, which is a group of muscles that stretches from the pubic bone to the tailbone. These muscles help stabilize the spine, support the womb, and control bladder and bowel functions. The pelvic floor also stretches during childbirth, allowing the baby to pass more easily through the birth canal. 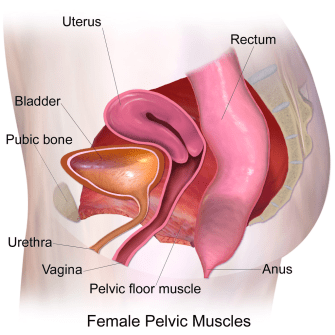 A medical illustration depicting the female pelvic muscles.Credit: BruceBlaus via Wikipedia and licensed under CC BY-SA 4.0

Known as the “pelvic floor hypothesis,” this idea has been difficult to test. In the current study, a team of researchers from the University of Texas and University of Vienna used computer models to test how increasing the size and thickness of the pelvic floor might affect women, both in general and during childbirth.

To test the models, the team used finite element analysis. This method, more commonly used in engineering projects, uses mathematics to test how structures would likely react to real-world forces, such as vibration, heat, fluid flow, and pressure. After testing a wide range of pelvic floor sizes and thicknesses, the results suggested that the pelvic floor hypothesis is correct.

“We found that thicker pelvic floors would require quite a bit higher intra-abdominal pressures than humans are capable of generating to stretch during childbirth,” Nicole Grunstra, an affiliated researcher at the University of Vienna’s Unit for Theoretical Biology in the Department of Evolutionary Biology, told UT News.

“Being unable to push the baby through a resistant pelvic floor would equally complicate childbirth, despite the extra space available in the birth canal, and so pelvic floor thickness appears to be another evolutionary ‘compromise,’ in addition to the size of the birth canal.”

The results highlight how evolution has helped us achieve remarkable anatomical balance.

“Although this dimension has made childbirth more difficult, we have evolved to a point where the pelvic floor and canal can balance supporting internal organs while also facilitating childbirth and making it as easy as possible,” lead study author Krishna Kumar told UT News.

Kids don’t always make you happier. Here’s why people have them anyway.
▸
5 min
—
with
Paul Bloom
Up Next
High Culture

Is Dumbledore gay? The question highlights a deeper literary debate

Once a book is published, who gets to interpret it? Us or the author?