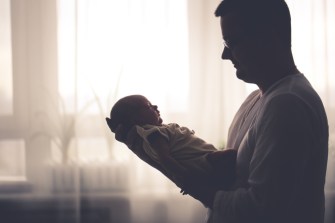 There is a clear physical connection between a mother and her newborn – but what about fathers?

Photo by Natalia Lebedinskaia on Shutterstock

A man’s entry into fatherhood isn’t accompanied by the same hormonal, physical, and emotional changes that a woman experiences throughout pregnancy, childbirth, and motherhood…but the changes that happen in the male brain due to fatherhood are no less important.

In fact, researchers have recently been looking into the connection between a father and his newborn child, and there have been several studies that reveal a man’s brain undergoes several changes in the first weeks of fatherhood.

High functioning in the “emotional processing” networks in the brain.

In a 2014 study, researchers compared brain activity in 89 new parents as they watched videos of their children. This study would examine the mothers (who were, in this case, the primary caregivers), fathers who worked outside the home but frequently helped with childcare, and homosexual fathers who raised a child without the help of a female.

In all three groups, the brain networks that are linked to emotional processing and social understanding were highly active. One of the most important notes from this study is that the fathers who raised a child without a female’s assistance showed almost identical emotional processing signals in the brain that caregiver mothers did.

Psychologist Elizabeth Gould (and her colleagues from Princeton University) have conducted a series of studies that show there is an increase in estrogen, oxytocin, prolactin, and glucocorticoids in both animal and human fathers.

Several studies (including this 2001 study by the Department of Biology at Queen’s University in Ontario) have shown the male testosterone (known as the male sex hormone) and cortisol (a stressor hormone) levels to dip in the first weeks of fatherhood.

Prolactin (referred to as the “mom hormone”, as it is used in the female system to promote lactation) also spikes in new fathers. According to a 2002 study, lowered testosterone levels and heightened prolactin levels in the male brain are associated with emotional responses to infant cries in new fathers.

Oxytocin, commonly known as “the love hormone”, also surges in the male system after the birth of a child. This hormone surge has proven to promote bonding, empathy, and altruism in the new father.

This 2012 study where fathers who inhaled oxytocin (subsequently spiking the oxytocin levels in their bloodstream) proved that new fathers who experienced these changes in hormone levels were more engaging with their newborns.

The researchers also concluded that this spike in oxytocin also had an impact on the newborn as well—their oxytocin levels also spiked. 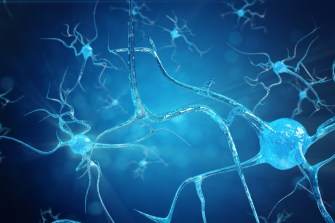 Image by Rost9 on Shutterstock

One of the most significant changes scientists have observed in the brain of a new-dad mouse is neurogenesis (the process of new neurons being formed in the brain). The new neurons that are formed have been proved to be directly linked to the time spent with their newborn pup in close proximity.

In this 2010 study, neurogenesis took place in male mice in the first few days following the birth of their pups. However, this extra boost of brain cells only happened in the mice that stayed in the nest. Other male mice, who were removed on the day of their pup’s birth, showed no new neuron changes.

When the researchers allowed the father to be close to the pups without physical contact (placing a mesh barrier between them), no additional neurons appeared, proving the father had to be physically present in the nest and interacting with his pups to experience neurogenesis. You can read more about this interesting experiment in Scientific American.

One of the new sets of brain cells formed were located in the “olfactory bulb”, which is responsible for how we process different smells and odors, and these new neurons were specifically tuned into the smell of the mice’s new pups.

Another of the new sets of brain cells grew in the hippocampus, which is the part of the limbic system in our brain that plays a role in memory and navigation.

Fatherhood also adds more gray and white matter to the areas of the brain that affect attachment.

A 2014 study conducted at the University of Denver by developmental neuroscientist Dr. Pilyoung Kim examined 16 new dads, once between the first 2-4 weeks of becoming a father and again between weeks 12-16.

This study revealed not only hormone changes, but physical changes to the male brain during the first months as a father. Certain areas (the parts of the brain that are linked to attachment, nurturing and empathy) showed more gray and white matter in the later tests.

This “bulking” of the brain, according to Dr. Kim, reflects a ramping up of parental skills in new fathers. “This anatomical change in the brain may support the fathers’ gradual learning experience over a period of many months,” says Dr. Kim.

It’s incredible to know that in each new, attentive father’s brain there is a special set of neurons that are dedicated to fatherhood and exist solely because of his child.

From "shell shock" to "combat fatigue," the wars of the past century have violently illuminated the power trauma can wield over the mind and body.
Up Next
Neuropsych