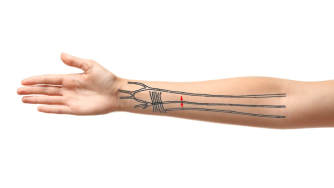 There’s no reason to think humans have stopped evolving. We see natural selection causing change in other animals all the time. For example, there has been an increase in tuskless elephants in Africa as a response to the poaching of ivory, and the skulls of urban foxes have changed as they adapt to scavenge cities. Within our bodies, scientists estimate there are trillions of mutations occurring each day. Meanwhile, our species eagerly awaits the emergence of a trait that allows us to put down our phones.

A new study finds evidence that not only are humans continuing to evolve, but we may be doing so at a faster rate than seen before. The research cites several examples of rapidly emerging traits such as an increasing lack of wisdom teeth, the shortening of babies’ faces with smaller jaws, the increased presence of a fabella (the small bone in the back of the knee joint) and extra bones in the feet.

The report’s primary focus, though, is a sudden increase in the appearance of the median artery in the adult human forearm.

The study was authored by scientists from Flinders University and the University of Adelaide in South Australia. It’s published in the Journal of Anatomy.

The median artery supplies blood to a fetus’ forearm in the womb during early gestation. It typically atrophies and is replaced by the radial and ulna arteries before birth. Few adults have historically had all three arteries — median, radial, and ulna — but this has been changing.

The study’s senior author Maciej Henneberg says, “This is micro evolution in modern humans and the median artery is a perfect example of how we’re still evolving because people born more recently have a higher prevalence of this artery when compared to humans from previous generations.”

The phenomenon was first noticed in the 18th century, and a study of the artery’s persistence was conducted in 1995. The more recent study extends that work, finding that the occurrence of the artery trio is accelerating.

“The prevalence was around 10% in people born in the mid-1880s compared to 30% in those born in the late 20th century,” says lead author Teghan Lucas, “so that’s a significant increase in a fairly short period of time, when it comes to evolution.”

Why this is occurring isn’t clear. “This increase could have resulted from mutations of genes involved in median artery development or health problems in mothers during pregnancy, or both actually,” says Lucas.

However, she says, one thing is clear: “If this trend continues, a majority of people will have median artery of the forearm by 2100.”

The researchers tracked the presence the median artery in cadavers. They examined the 78 upper limbs obtained from Australians who died between 2015 and 2016. The deceased were from 51 to 101 years of age at death. In 26 of the limbs, the median artery was present.

Says Henneberg, “We’ve collected all the data published in anatomical literature and continued to dissect cadavers donated for studies in Adelaide, and we found about one third of Australians have the median artery in their forearm and everyone will have it by the end of the century if this process continues.”

The scientists’ conclusion is that we’re evolving more quickly now than at any point in the last 250 years of study.

Stem cell-derived chondrocytes could be the key to regenerating damaged cartilage.
Up Next
Starts With A Bang

Starts With A Bang Podcast #62 — Black Holes and ALMA

(Image credit: EHT Collaboration; acknowledgement: ESO) How we’re seeing black holes as never before… and a whole lot more. It was only back in the early 2000s that scientists were struggling […]