The Book of Why: How a 'causal revolution' is shaking up science

A much-needed "causal revolution" has arrived in Judea Pearl's 'The Book of Why'. But despite vast improvements over "trad stats", there's cause for concern over logic-losing numbers. 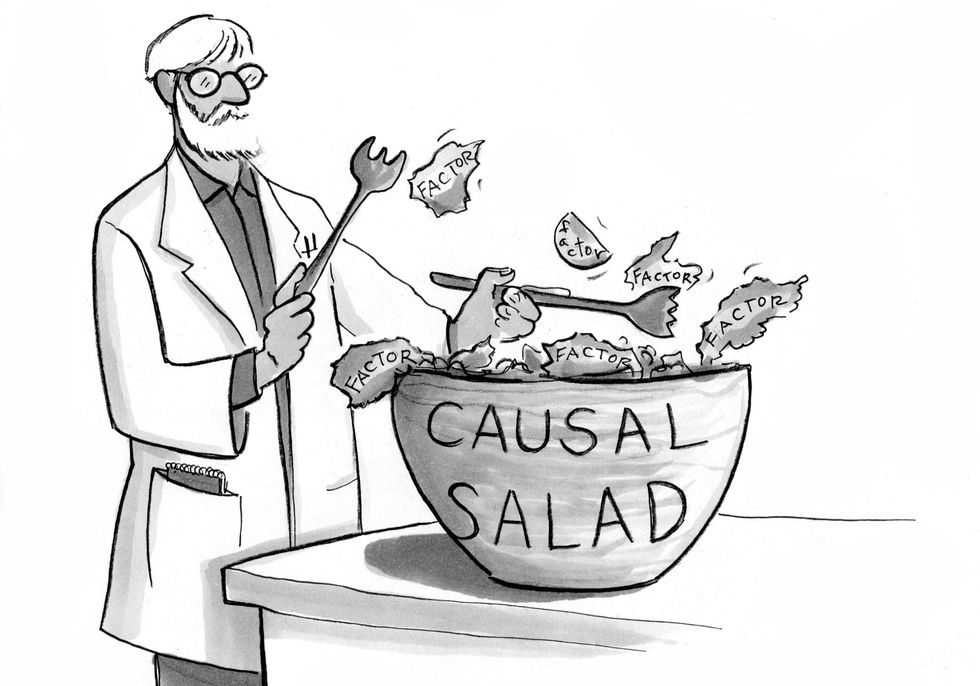 2. Pearl updates old correlation-isn’t-causation wisdom with “causal questions can never be answered from data alone.” Sorry, Big Data (and A.I.) fans: “No causes in, no causes out” (Nancy Cartwright).

3. Because many causal processes can produce the same data/stats, it’s evolutionarily fitting that “the bulk of human knowledge is organized around causal, not probabilistic relationships.” Crucially, Pearl grasps that “the grammar of probability [& stats]… is insufficient.”

8. Analysis-of-variance training encourages fallacy-of-division miscalculations. Many phenomena are emergently co-caused and resist meaningful decomposition. What % of car speed is “caused’ by engine or fuel? What % of drumming is “caused” by drum or drummer? What % of soup is “caused” by its recipe?

Fear that new technologies are addictive isn't a modern phenomenon.

This article was originally published on our sister site, Freethink, which has partnered with the Build for Tomorrow podcast to go inside new episodes each month. Subscribe here to learn more about the crazy, curious things from history that shaped us, and how we can shape the future.

In many ways, technology has made our lives better. Through smartphones, apps, and social media platforms we can now work more efficiently and connect in ways that would have been unimaginable just decades ago.

But as we've grown to rely on technology for a lot of our professional and personal needs, most of us are asking tough questions about the role technology plays in our own lives. Are we becoming too dependent on technology to the point that it's actually harming us?

In the latest episode of Build for Tomorrow, host and Entrepreneur Editor-in-Chief Jason Feifer takes on the thorny question: is technology addictive?

What makes something addictive rather than just engaging? It's a meaningful distinction because if technology is addictive, the next question could be: are the creators of popular digital technologies, like smartphones and social media apps, intentionally creating things that are addictive? If so, should they be held responsible?

To answer those questions, we've first got to agree on a definition of "addiction." As it turns out, that's not quite as easy as it sounds.

If we don't have a good definition of what we're talking about, then we can't properly help people.

"Over the past few decades, a lot of effort has gone into destigmatizing conversations about mental health, which of course is a very good thing," Feifer explains. It also means that medical language has entered into our vernacular —we're now more comfortable using clinical words outside of a specific diagnosis.

"We've all got that one friend who says, 'Oh, I'm a little bit OCD' or that friend who says, 'Oh, this is my big PTSD moment,'" Liam Satchell, a lecturer in psychology at the University of Winchester and guest on the podcast, says. He's concerned about how the word "addiction" gets tossed around by people with no background in mental health. An increased concern surrounding "tech addiction" isn't actually being driven by concern among psychiatric professionals, he says.

"These sorts of concerns about things like internet use or social media use haven't come from the psychiatric community as much," Satchell says. "They've come from people who are interested in technology first."

The casual use of medical language can lead to confusion about what is actually a mental health concern. We need a reliable standard for recognizing, discussing, and ultimately treating psychological conditions.

Too much reading causes... heat rashes?

But as Feifer points out in his podcast, both popularizing medical language and the fear that new technologies are addictive aren't totally modern phenomena.

Take, for instance, the concept of "reading mania."

In the 18th Century, an author named J. G. Heinzmann claimed that people who read too many novels could experience something called "reading mania." This condition, Heinzmann explained, could cause many symptoms, including: "weakening of the eyes, heat rashes, gout, arthritis, hemorrhoids, asthma, apoplexy, pulmonary disease, indigestion, blocking of the bowels, nervous disorder, migraines, epilepsy, hypochondria, and melancholy."

"That is all very specific! But really, even the term 'reading mania' is medical," Feifer says.

"Manic episodes are not a joke, folks. But this didn't stop people a century later from applying the same term to wristwatches."

Indeed, an 1889 piece in the Newcastle Weekly Courant declared: "The watch mania, as it is called, is certainly excessive; indeed it becomes rabid."

Similar concerns have echoed throughout history about the radio, telephone, TV, and video games.

"It may sound comical in our modern context, but back then, when those new technologies were the latest distraction, they were probably really engaging. People spent too much time doing them," Feifer says. "And what can we say about that now, having seen it play out over and over and over again? We can say it's common. It's a common behavior. Doesn't mean it's the healthiest one. It's just not a medical problem."

Few today would argue that novels are in-and-of-themselves addictive — regardless of how voraciously you may have consumed your last favorite novel. So, what happened? Were these things ever addictive — and if not, what was happening in these moments of concern?

People are complicated, our relationship with new technology is complicated, and addiction is complicated — and our efforts to simplify very complex things, and make generalizations across broad portions of the population, can lead to real harm.

There's a risk of pathologizing normal behavior, says Joel Billieux, professor of clinical psychology and psychological assessment at the University of Lausanne in Switzerland, and guest on the podcast. He's on a mission to understand how we can suss out what is truly addictive behavior versus what is normal behavior that we're calling addictive.

For Billieux and other professionals, this isn't just a rhetorical game. He uses the example of gaming addiction, which has come under increased scrutiny over the past half-decade. The language used around the subject of gaming addiction will determine how behaviors of potential patients are analyzed — and ultimately what treatment is recommended.

"For a lot of people you can realize that the gaming is actually a coping (mechanism for) social anxiety or trauma or depression," says Billieux.

"Those cases, of course, you will not necessarily target gaming per se. You will target what caused depression. And then as a result, If you succeed, gaming will diminish."

In some instances, a person might legitimately be addicted to gaming or technology, and require the corresponding treatment — but that treatment might be the wrong answer for another person.

"None of this is to discount that for some people, technology is a factor in a mental health problem," says Feifer.

"I am also not discounting that individual people can use technology such as smartphones or social media to a degree where it has a genuine negative impact on their lives. But the point here to understand is that people are complicated, our relationship with new technology is complicated, and addiction is complicated — and our efforts to simplify very complex things, and make generalizations across broad portions of the population, can lead to real harm."

Behavioral addiction is a notoriously complex thing for professionals to diagnose — even more so since the latest edition of the Diagnostic and Statistical Manual of Mental Disorders (DSM-5), the book professionals use to classify mental disorders, introduced a new idea about addiction in 2013.

"And then, the DSM-5 went a tiny bit further — and proposed that other potentially addictive behaviors require further study."

This might not sound like that big of a deal to laypeople, but its effect was massive in medicine.

The assumption that a lot of us are addicted to technology may itself be harming us by undermining our autonomy and belief that we have agency to create change in our own lives. That's what Nir Eyal, author of the books Hooked and Indistractable, calls 'learned helplessness.'

"The price of living in a world with so many good things in it is that sometimes we have to learn these new skills, these new behaviors to moderate our use," Eyal says. "One surefire way to not do anything is to believe you are powerless. That's what learned helplessness is all about."

So if it's not an addiction that most of us are experiencing when we check our phones 90 times a day or are wondering about what our followers are saying on Twitter — then what is it?

"A choice, a willful choice, and perhaps some people would not agree or would criticize your choices. But I think we cannot consider that as something that is pathological in the clinical sense," says Billieux.

Of course, for some people technology can be addictive.

"If something is genuinely interfering with your social or occupational life, and you have no ability to control it, then please seek help," says Feifer.

But for the vast majority of people, thinking about our use of technology as a choice — albeit not always a healthy one — can be the first step to overcoming unwanted habits.

For more, be sure to check out the Build for Tomorrow episode here.