Tech billionaires could end climate change. So why aren’t they?

David Wallace-Wells points out that the people who can save the world just aren't all that interested.

DAVID WALLACE-WELLS: We live in a culture now that is really enamored with the idea of technological innovation. I would say that certainly up until the last couple of years, but even in the aftermath of the 2016 election, there's just been widespread cultural admiration, lionization, even deification of the founders of Silicon Valley and the world that they have built for us. I think that's misplaced faith in a lot of ways. But I think given the scale of the climate crisis, it's especially damning that so few of these people, so few of these founders, and so few of our new billionaires are really invested in the climate crisis and in figuring out ways to address it. And I don't actually even understand why that is, to the extent that these are people who want to see themselves as world historical figures, who are driven in part by ego, you'd think they would see the existential threat of climate change as an incitement to action.

You could theoretically invent a solution to this problem and save the world. And yet very few of them are doing that. Instead, they seem focused on problems that are arising from their own invention. So they're very worried about runaway AI, for instance, artificial intelligence. But climate change is a much bigger problem than that. Climate change challenges, threatens to undermine the entire infrastructure of our modern world, all of our political institutions, all of our social institutions, our national institutions. Everything is vulnerable to the transformations of climate, because we all live within climate. And I think one perverse effect of our cult of technology is that we're learning more and more to think of what's happening on our phones and on our screens as the real world and to be less focused on the impacts that are happening outside our windows. In an awful way, I think that may train us for the climate suffering that we're likely to see over the next few decades. But what I would hope for is that more of these figures are really focused on what are possible technological solutions, and you do see Bill Gates doing exactly that. He's made really significant investments in negative emissions technologies and is, in fact, behind the most exciting research in that area, which is quite exciting. It's a company called Carbon Engineering led by a guy named David Keith that has found that you can take carbon out of the atmosphere at a cost of about $100 a ton. That would mean, in theory that we could completely neutralize all global carbon emissions at a cost of about $3 trillion a year, which would mean that the economy could continue just as it is. Our agriculture could continue just as it is. Our infrastructure, our industry can continue just as they are, and we could just completely suck out all of the carbon that was being emitted for $3 trillion a year, which sounds like an enormous amount. But there are estimates about how much we subsidize the fossil fuel business today that run as high as $5 trillion a year. In theory, we could redirect those subsidies to this technology and solve the problem already. That's in theory. There are huge engineering problems. We'd have to find a place to put the carbon, which would require, the experts say, a new industry two or three times the size of the oil and gas business right now that's just to put the carbon back into the ground. But nevertheless, there are really promising technological paths forward.

We've seen incredible progress on green energy over the last 10, 15 years, much faster than anyone predicted, even its biggest advocates. And we need to continue doing that. So while there are places in the world now, many places in the world where renewables are cheaper than dirty energy, it's not true everywhere. And it's not true in the places that need it most, parts of China, India, sub-Saharan Africa. The more that we invest in that technology, the more we can share that IP and allow other countries in the world to develop on much more carbon responsible paths. So there are great technological opportunities for people who are focused on solving the problem through technology. The problem is the most powerful people who we've decided are our technological leaders just seem not all that interested in this problem. And I think we really need to change those minds, because we need that money. We need that intellectual power. We need that cultural cachet focused on this problem. In fact, we need everything we can get. This is really an all hands on deck problem, and I don't think we'll be able to address it without technology. So we need all those people. 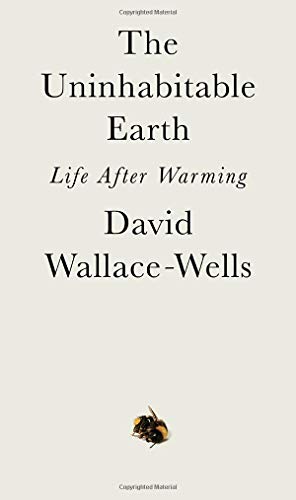 The Uninhabitable Earth: Life After Warming
List Price: $27.00
New From: $16.20 in Stock
Used From: $15.99 in Stock
From Your Site Articles
Related Articles Around the Web