Frank Jacobs is Big Think's "Strange Maps" columnist. From a young age, Frank was fascinated by maps and atlases, and the stories they contained. Finding his birthplace on the map[…]
Go to Profile
Strange Maps

Three scientists publish a paper proving that Mercury, not Venus, is the closest planet to Earth.
▸
with
Frank Jacobs 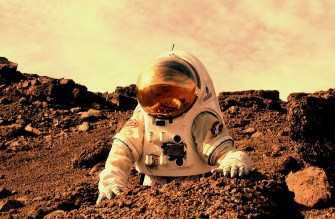 Elon Musk has said he wants to die on Mars.

Did Musk pick the wrong planet to die on?

By 2024, Elon Musk wants to land humans on Mars – the billionaire entrepreneur has said that he himself wants to go to the Red Planet, and even wants to die there (just not on impact, he quips). But has SpaceX chosen the wrong planet to colonize? If the plan was to pick the closest planet: yes indeed.

While Mars looms large in human culture and imagination, most scientific sources refer to Venus as the planet that’s the shortest distance away from Earth. NASA mentions Venus as our closest neighbor. But while it’s true that no other planet comes closer – the shortest approach is 0.28 AU (1) or 25 million miles (41 million km) – it’s not true that Venus is the closest planet (2) on average (even though that too is often erroneously asserted). 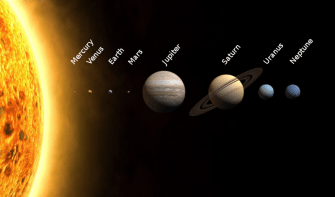 A line-up of the usual suspects. Only the sizes are to scale, not the distances. And they usually don’t line up as nicely as this.

A faulty line-up of the solar system

“As it turns out, by some phenomenon of carelessness, ambiguity or groupthink, science popularizers have disseminated information based on a flawed assumption about the average distance between planets,” write Tom Stockman, Gabriel Monroe and Samuel Cordner in an article published by Physics Today.

They go on to explain the mathematical method they devised to prove that, when averaged over time, it is in fact Mercury – the first rock from the Sun – that is Earth’s nearest neighbor.

Long story short: Mercury is closest to Earth on average because it orbits the Sun more closely. That also means – mind-blowingly – that Mercury is the closest neighbor of all planets in our solar system, including gas giants Jupiter and Saturn and snowball planets Neptune and Uranus on the freezing outer edges of the system. 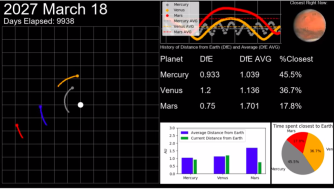 Simulation of Mercury (grey), Venus (orange), Earth (blue) and Mars (red) circling the Sun, and the calculation of average distances to Earth.

In Physics Today, the three scientists describe their method in great detail. For laypeople like (probably) you and (certainly) me, the YouTube video at the top of this post, narrated by Mr Stockman, is more illuminating. In 6 minutes 40 seconds, he had me convinced.

While some commenters agree (“a neat new way to think about it!”), one or two are irritated that the hoi polloi are only now clocking on to this (“Any idiot should have been able to point this out”).

Either way, one has to feel for the one commenter who seems to have figured this out a long time ago, but didn’t have this video to prove their point: “I told my school teacher many years ago that Mercury is nearest to Earth but they laughed at me.”

(1) 1 Astronomical Unit (AU) is the average distance between the Earth and the Sun: 93 million miles (150 million km).

(2) Their name aptly derived from the Greek ‘planetai’ for “wanderers”, planets orbit around the Sun, hence the immense variation in the distances between them.