Eyes on the prize: Why optimists make superb leaders

Recognizing the opportunity the future holds can help you better manage the challenges to come.

Michio Kaku
Dr. Michio Kaku is the co-founder of string field theory, and is one of the most widely recognized scientists in the world today. He has written 4 New York Times Best Sellers, is the science correspondent for CBS This Morning and has hosted numerous science specials for BBC-TV, the Discovery/Science Channel. His radio show broadcasts to 100 radio stations every week. Dr. Kaku holds the Henry Semat Chair and Professorship in theoretical physics at the City College of New York (CUNY), where he has taught for over 25 years. He has also been a visiting professor at the Institute for Advanced Study as well as New York University (NYU).
08 November, 2019

Now, President Eisenhower, when he was a general, he was asked about his attitude toward victory, toward fights, and toward war. And he basically said that pessimists never win wars. Only optimists win wars. And optimists, what separates them from the pessimists?

Now, I'm a physicist. For me seeing the future is-- a large chunk of it is understanding the laws of science. When I was a kid, when I was a child, I had two role models. First was Einstein. I read that he couldn't finish his greatest work. And as a child, I said to myself, I'm going to help finish it. I'm going to help finish it, because it's the fundamentals of physics.

But the other role model I had was, well, I used to watch Flash Gordon on TV every Saturday morning. And he blew my mind away-- ray guns, cities in the sky, invisibility shields, monsters from outer space. And then I began to realize that the two loves of my life were actually the same thing, that if you want to understand the future, you have to understand science. You've got to pay your dues.

That's where leadership will take you, because you can see the future. That's what Eisenhower could do. He could see the future of a war, because he understood the mechanics of the war and how the war would progress. Seeing the future is the key to success in life. I think it's the key to intelligence. And it's also the key to leadership, as well.

Now, you may say to yourself, now, wait a minute. I thought IQs were a good predictor of the future. Wrong. If you take a look at people with high IQs, yes, some of them do win the Nobel Prize. But a lot of them wind up as marginal people, petty criminals, people that are failures. And then you wonder, why? Why is it that some people with high IQs never get anywhere?

Well, the Air Force had this problem. You see, the Air Force devised a test. What happens if your airplane is shot down over enemy territory in Vietnam, and you're captured by the Vietnamese? Do something. What are you going to do? It turns out that the people with high IQs got paralyzed, flummoxed. They didn't know what to do. They were paralyzed. What? You're captured behind enemy lines? What are you going to do? Give up?

The people who came up with the most imaginative, the most creative ideas, they were the ones who did not score so high on the IQ exam, but they were creative. They saw the future. They came up with all sorts of schemes in which to escape.

Now, I like to think of it this way. Let's say you've got a bunch of people, kids, and you ask them to rob a bank. That's your job, rob a bank. How would you do it? I think the people with high IQs would get all embarrassed, flummoxed. They wouldn't know what to do. Even people who want to become policemen of the future, they would get all flummoxed. But criminals, they are constantly thinking about the future-- master criminals now, not the ones who are petty and just steal things off the grocery shelf.

The Future of Humanity: Our Destiny in the Universe 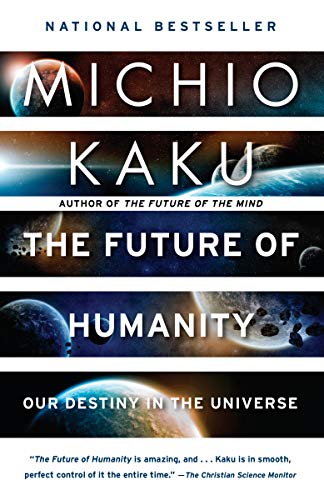