Language evolves to reflect our understanding of existence. Before Hippocrates, healing was a system of theurgy—divine influence on human events—and religious philosophy. The Greek physician is credited with separating medicine from those previous beliefs. As our understanding of science evolved, new fields emerged: astronomy, biology, physics, sociology, psychology, neuroanthropology.

That last one is still so relatively new that spell checkers don’t recognize it. During a 2008 conference, the University of South Florida anthropology professor Daniel Lende revived the notion that anthropologists benefit when studying neuroscience. He argued that knowledge of the evolution of the brain offers insights into intentions, helping anthropologists better understand the motivations of past cultures.

Whereas neuroanthropology looks backward, culture architecture takes that same lens and looks forward, according to bestselling author Jamie Wheal. Wheal co-wrote the Pulitzer Prize-nominated book, Stealing Fire: How Silicon Valley, Navy SEALs and Maverick Scientists Are Revolutionizing the Way We Live and Work. Founder of the Flow Genome Project, he’s the new host of the new Collective Insights podcast series HomeGrown Humans, which focuses on the intersection of neuroanthropology and culture architecture.

Like Hippocrates building on past knowledge to create new systems, Wheal wants to learn from the lessons of the past and build a better future. Summating the objective of the podcast in a single question, he frames it this way:

“How do we stop seeking and stop searching and stop thrashing around, making a mess behind us, and come to fully embrace the human experience?”

The essence of the human condition, he says, lies in simplicity, reminiscent of the Golden Rule from the Talmud. A gentile asked Rabbi Hillel to explain the entirety of the Torah while standing on one foot, to which Hillel replied, “That which is despicable to you, do not do to your fellow. That is the whole Torah; the rest is commentary.”

Wheal recognizes that humans love commentary as well. Storytelling is the foundation of culture. He invokes Dorothy, who went on an epic heroine’s journey only to discover that there’s no place like home. As with any Campbellian character, she had to leave Kansas in order to love Kansas.

How do we stop seeking and stop searching and stop thrashing around, making a mess behind us, and come to fully embrace the human experience?

When contemplating HomeGrown Humans, Wheal wanted to foster conversations that include critical thought and mystical inclinations. He was inspired by a debate between Sam Harris and Jordan Peterson, in which neither thinker would concede an inch to find common ground. Instead, he wants to find such ground—less New Atheist and more New Platonist. As he puts it:

“What is it like to tap people that are well-versed in reason, logic, and evidence, but also have their eye on the mystery? They’ve had in their own lives, or in their career or readings, some glimpse of more. Hopefully, that’s come around to inform their perspective on their field of expertise and what they hold as both the liabilities and possibilities of us going forward.”

To better understand the implications of neuroanthropology, Wheal recommends Jared Diamond’s Pulitzer-winning Guns, Germs, and Steel and Yuval Noah Harari’s Sapiens and Homo Deus, books that reveal how we arrived here. For the culture architecture piece, he cites Daniel Kahnemann’s Thinking, Fast and Slow and Richard Thaler’s Nudge: Improving Decisions About Health, Wealth, and Happiness. You have all this knowledge, now what are you going to do with it?

This synthesis of ideologies creates the central thesis of HomeGrown Humans.

“It’s taking optimal psychology, neuroscience, and historical analysis and really using it to get under the hood of culture and use all of the tools we have from the hard sciences and social sciences to get a better understanding of what makes us tick.”

To help him answer such questions, Wheal has invited a range of experts to appear on HomeGrown Humans, including Sue Phillips, an instructor at Harvard Divinity School and co-founder of Sacred Design Lab; Erik Davis, author of TechGnosis and High Weirdness; Adam Gazzaley, the founder and executive director of Neuroscape; and Dennis McKenna, an ethnopharmacologist who’s been leading the way in the psychedelic renaissance for decades.

With each conversation, Wheal hopes to address our crisis in meaning by provoking inspiration, healing, and connection. The distance between the past and future is this moment we’re collectively experiencing right now. Through our ingenuity and determination, Wheal believes we can construct a better world. HomeGrown Humans is his contribution to the conversation. 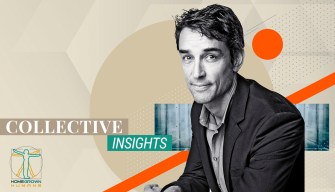 The first episode of HomeGrown Humans, ‘Care for Your Soul: Designing Sacred Practices That Work’, with Harvard’s Sue Phillips, is out today. Subscribe here.

Tags
culturehistoryneurosciencepersonal growthphilisophyphilosophypsychology
In this article
culturehistoryneurosciencepersonal growthphilisophyphilosophypsychology
Related
Neuropsych
Memory and the benefits of forgetting
Forgetfulness isn’t always a “glitch” in our memories; it can be a tool to help us make sense of the present and plan for the future.
The Learning Curve
5 Stoic quotes to help you through difficult times
“We suffer more often in the imagination than in reality.”
The Past
The Wild West was lawless and chaotic — and the police helped keep it that way
Lawmen and outlaws were often the same people.
Thinking
6 great philosophers and how they used their political power
Most philosophers merely contemplate the world, but what about the ones who actually tried to change it?
Neuropsych
Asthma drug brings back “lost” memories
In a study involving mice, scientists used two different techniques — one optogenetic and one pharmacologic — to recover “lost” memories.
Up Next
Neuropsych
Psychogenic shivers: Why we get the chills when we aren’t cold
Humans are particularly prone to shiver when a group does or thinks the same thing at the same time.