Imagine it’s 2045. You start hearing rumors from your well-heeled friends about a mysterious corporation based on an undisclosed island that’s offering an unprecedented service: the ability to genetically design your baby.

The baby will have some of your genetics, and some genetics from a sperm or egg donor, selected by you. But the rest of your child’s genetic profile will be engineered by science. These changes will make it impossible for your child to develop genetic diseases. They’ll also allow you to customize your child for dozens of traits, including intelligence level, emotional disposition, sexual orientation, height, skin tone, hair color, and eye color, to name a few.

This raises unsettling philosophical questions for some customers. “When does my child stop being my child?” they ask the corporate representatives. These wary customers are reminded of how risky it is to reproduce the old-fashioned way. The Better Genetics Corporation’s motto sums it up: “Only God plays dice—humans don’t have to.”

This is the world described in a new science-fiction series by Eugene Clark titled “Genetic Pressure”, which explores the moral and scientific implications of a future in which designer babies are becoming a major industry. The first book begins with the story of Rachel, a renowned horse breeder who befriends a billionaire client, and soon gets the funding to visit the tropical island on which the Better Genetics Corporation is headquartered.

There, corporate executives walk her through the process of designing a baby—an experience that feels like an uncanny mix between visiting a doctor and designing a luxury car. The series is told from multiple perspectives, serving as a deep dive into a complex moral web that today’s scientists may already be weaving.

[T]he introduction of designer babies would create a labyrinth of philosophical dilemmas that society is only beginning to explore.

Case in point: In 2018, Chinese scientist He Jiankui announced that he had helped create the world’s first genetically engineered babies. Using the gene-editing tool CRISPR on embryos, He Jiankui modified a gene called CCR5, which enables HIV to enter and infect immune system cells. His goal was to engineer children that were immune to the virus.

It’s unclear whether he succeeded. But what’s certain is that the experiment shocked the international scientific community, which generally agreed that it’s unethical to conduct gene-editing procedures on humans, given that scientists don’t yet fully understand the consequences.

“This experiment is monstrous,” Julian Savulescu, a professor of practical ethics at the University of Oxford, told The Guardian. “The embryos were healthy. No known diseases. Gene editing itself is experimental and is still associated with off-target mutations, capable of causing genetic problems early and later in life, including the development of cancer.”

Importantly, He Jiankui wasn’t treating a disease, but rather genetically engineering babies to prevent the future contraction of a virus. These kinds of changes are heritable, meaning the experiment could have major downstream effects on future generations. So, too, would a designer-baby industry, even if scientists can do it safely.

With major implications on inequality, discrimination, sexuality, and our conceptions of life, the introduction of designer babies would create a labyrinth of philosophical dilemmas that society is only beginning to explore. 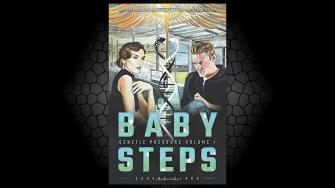 One question the “Genetic Pressure” series explores: What would tribalism and discrimination look like in a world with designer babies? As designer babies grow up, they could be noticeably different from other people, potentially being smarter, more attractive and healthier. This could breed resentment between the groups—as it does in the series.

“[Designer babies] slowly find that ‘everyone else,’ and even their own parents, becomes less and less tolerable,” author Eugene Clark told Big Think. “Meanwhile, everyone else slowly feels threatened by the designer babies.”

For example, one character in the series who was born a designer baby faces discrimination and harassment from “normal people”—they call her “soulless” and say she was “made in a factory,” a “consumer product.”

Would such divisions emerge in the real world? The answer may depend on who’s able to afford designer baby services. If it’s only the ultra-wealthy, then it’s easy to imagine how being a designer baby could be seen by society as a kind of hyper-privilege, which designer babies would have to reckon with.

Even if people from all socioeconomic backgrounds can someday afford designer babies, people born designer babies may struggle with tough existential questions: Can they ever take full credit for things they achieve, or were they born with an unfair advantage? To what extent should they spend their lives helping the less fortunate?

Sexuality presents another set of thorny questions. If a designer baby industry someday allows people to optimize humans for attractiveness, designer babies could grow up to find themselves surrounded by ultra-attractive people. That may not sound like a big problem.

But consider that, if designer babies someday become the standard way to have children, there’d necessarily be a years-long gap in which only some people are having designer babies. Meanwhile, the rest of society would be having children the old-fashioned way. So, in terms of attractiveness, society could see increasingly apparent disparities in physical appearances between the two groups. “Normal people” could begin to seem increasingly ugly.

But ultra-attractive people who were born designer babies could face problems, too. One could be the loss of body image.

“In a society of sexual equals, they start looking for other differentiators,” he said, noting that violet-colored eyes become a rare trait that genetically engineered humans find especially attractive in the series.

On a policy level, there are many open questions about how governments might legislate a world with designer babies. But it’s not totally new territory, considering the West’s dark history of eugenics experiments.

In the 20th century, the U.S. conducted multiple eugenics programs, including immigration restrictions based on genetic inferiority and forced sterilizations. In 1927, for example, the Supreme Court ruled that forcibly sterilizing the mentally handicapped didn’t violate the Constitution. Supreme Court Justice Oliver Wendall Holmes wrote, “… three generations of imbeciles are enough.”

After the Holocaust, eugenics programs became increasingly taboo and regulated in the U.S. (though some states continued forced sterilizations into the 1970s). In recent years, some policymakers and scientists have expressed concerns about how gene-editing technologies could reanimate the eugenics nightmares of the 20th century.

Currently, the U.S. doesn’t explicitly ban human germline genetic editing on the federal level, but a combination of laws effectively render it illegal to implant a genetically modified embryo. Part of the reason is that scientists still aren’t sure of the unintended consequences of new gene-editing technologies.

But there are also concerns that these technologies could usher in a new era of eugenics. After all, the function of a designer baby industry, like the one in the “Genetic Pressure” series, wouldn’t necessarily be limited to eliminating genetic diseases; it could also work to increase the occurrence of “desirable” traits.

If the industry did that, it’d effectively signal that the opposites of those traits are undesirable. As the International Bioethics Committee wrote, this would “jeopardize the inherent and therefore equal dignity of all human beings and renew eugenics, disguised as the fulfillment of the wish for a better, improved life.”

We all know assholes. Perhaps, you are one. Now, psychologists are trying to answer one of life’s biggest mysteries: What, exactly, makes someone an asshole?
The Future

The hyperloop would be a great idea for a completely flat planet. With topography and infrastructure, it’s a very different story.
The Future

Pseudoscience is science’s shadow.
Up Next
Starts With A Bang

The Great Orion Nebula Is Even Greater Than You Know

This spectacular image of the Orion Nebula, complete with its incredibly rich star-formation region, was obtained from multiple exposures using the HAWK-I infrared camera on ESO’s Very Large Telescope in […]