You are driving down the highway listening to music and thinking about a beach vacation in Hawaii when you realize your exit is sooner than you thought. Do you quickly change lanes to try to make your turn or do you keep going and take the next exit?

This is a split decision. Researchers at the University of Colorado Anschutz Medical Campus wanted to explore how the brain makes these quick “go—no go” decisions. Previous research on this same topic is discussed in this article of Medical News Today.

“We wanted to know how this kind of decision making takes place,” said the study’s senior author Diego Restrepo, Ph.D., professor of cell and developmental biology at the University of Colorado School of Medicine.

This is the biggest decision-making mistake | Barnaby Marsh | Big Thinkwww.youtube.com

While it was previously thought that the cerebellum was in charge of these decisions, it’s been uncovered that it is more like a “complex web of connections” through the brain that goes into how you make a quick decision or choice.

Susan Courtney, a professor of psychological and brain sciences, found in her 2017 study that these quick decisions involve extremely fast coordination between an area of the premotor cortex and two areas in the prefrontal cortex.

Restrepo’s team looked at the cerebellum’s molecular layer interneurons (MLIs). In a Pavlovian twist, mice were rewarded with sugary water after smelling a “rewarded odorant.” When an “unrewarded odorant” was released into the air, they were taught to avoid licking the spout. If they took a lick, they were sent to mouse timeout. After a few rounds, the mice learned the trick: lick to this smell, scurry away at that smell. Then Restrepo messed with their brains by throwing in chemogenetic agents that threw off their olfactory sense.

The cerebellum, or “little brain,” sits just above the brainstem. Traditionally, it is responsible for the coordination of voluntary movements as well as motor functions like balance, posture, and coordination. It has also been linked to emotional control, such as in our fear and pleasure responses, and is associated with non-motor conditions such as autism spectrum disorders.

Research on cerebellum damage results in a variety of issues, including difficulty with balancing, errors in the force and speed of movement, gait impairment, and even decreased muscle tone. As the cerebellum changes with age, it’s especially important to exercise in order to keep that region functioning optimally for as long as possible. 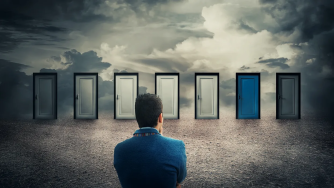 Restrepo notes that the cerebellum is responsible for a lot of learning—perhaps unsurprisingly, given its proximity to the spinal cord and its influence on motor patterns. Split-second decisions are an old evolutionary necessity and would have started evolving quite early on. As he says,

“We found an entire subset of brain cells that change after learning. It sheds further light on how the cerebellum functions and the complex web of connections that go into quick decision making.”

How long does it take to make a split decision and have good results?

The researchers in Susan Courtney’s study highlighted that timing is everything when it comes to these quick decisions. If the decision to change is made within 100 milliseconds (of being presented with the choice), the change of mind will succeed in altering the original course of action. However, if it takes at least (or more than) 200 milliseconds, the chances of the change succeeding are significantly less.

Quantum mechanics + consciousness: There is nothing better than mixing two great mysteries to produce an even bigger one.
Neuropsych

The internet has made it easier than ever to keep in touch with our exes. For people in relationships, that can cause problems.
Up Next
The Present

Learn the fundamentals of real estate for just $25

The market is moving — dive in now.