There’s hardly a warmer or fuzzier holiday than Valentine’s Day each February 14. It was created in 496 by Pope Gelasius I, or maybe Felix III according to historian T.P. Wiseman. Among those who helped reshape it into a day of romance were Chaucer and Shakespeare, and after Hallmark introduced the first Valentine’s cards in 1913 it was on its way to becoming the celebration of hearts and flowers we know today. But it didn’t start that way.

When Gelasius — or Felix — marked February 14th as the Feast of St. Valentine, he was absorbing a long-standing Roman, and likely pre-Roman, pagan holiday previously celebrated on February 15: Lupercalia. Forget touchy-feely. Lupercalia was intense. Various sources describe the festivities and their meaning differently, but they all describe a wild festival compared to the rom-com holiday we ended up with. 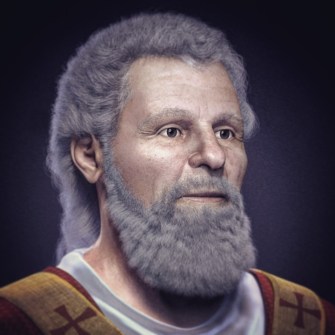 But first of all, St. Valentine. There may or may not have ever been a St. Valentine. Even Gelasius doesn’t seem to have known much about him, referring to him as one of those “… whose names are justly reverenced among men, but whose acts are known only to God.” The story goes that he was a third-century priest who was beheaded by Rome’s Christian Emperor Claudius II for helping Christian Roman soldiers get married. That may or many not be true, but it’s believed that Claudius had two men named Valentine beheaded in the third century, both of them on February 14th. Somewhere in here was Valentine of Interamna, who may or may not have been the same person as beheaded St. Valentine of Rome. There was also a third Valentine. Maybe. 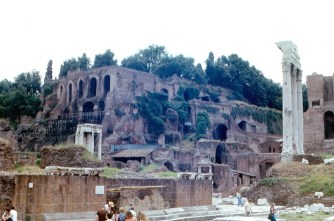 Center of the action: Lupercal

Lupercalia’s “festivities” began in a cave called the Lupercal, which modern archeologists believe they found in 2007 on the north side of Palatine Hill in Rome. It was purported to be the shelter in which the twins of Roman mythology Romulus and Remus were suckled by a she-wolf (The Latin word is also slang for “prostitute,” by the way, so, hm again.) Fourth-century pagan commentator Servius asserted that the cave was also the location at which the god Mars impregnated the twins’ mortal mother, priestess Rhea Silvia.

That couple was said to have founded Rome, and that seems to be when the festival of Lupercalia started. The celebrations were conducted by the Sodales Luperci, a priestly college whose priests were known as Luperci. There were originally by two families, or gentes, within the college descended from the twins, the Quinctilii from Romulus, and the Fabii from Remus. Eventually, Julius Ceasar added the Julii— for “Julius?” — one of whom was Marc Antony. 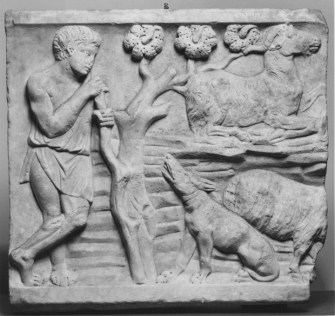 Lupercalia was a bad day for goats. And puppies!

Lupercalia began with sacrifices of two goats and a puppy. Not an adult dog — it had to be a puppy. Why? It may have been a tribute to the she-wolf. However, Plutarch, speculating much later, suggested the tradition might have been handed down from the Greeks, who were apparently very fond of slaughtering adorable young dogs. They did it so often they even had a word for it, periskulakismoi, which is said to mean “purification by puppy.”

As for the goats, sacrifice was just for openers. Romans stripped the flesh off of their carcasses and cut the material into furry thongs. (More on them in a moment.) They also spitted their entrails onto sticks to be eaten during the festival.

Following the animal sacrifice, Luperci touched the heads of two young male nobles with the blood-coated knives they’d used, after which wool dipped in milk would be rubbed on. Finally, with all that dripping down their faces, ears, and necks, the boys were expected to fake-laugh to conclude the ritual. It may have been about cleansing. 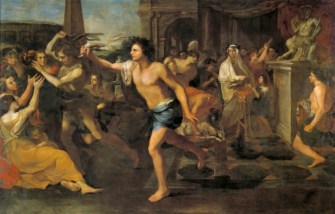 Thongs for the disturbing images

The goat thongs were called februare. So, yes, these strips of hairy goat flesh are what the second month of the year is named for.

In any event, what happened next is that the Luperci, and perhaps other upper-class men, stripped naked, were oiled and went running through Rome, whipping women with their thongs. (Plutarch suggested their nakedness was for speed.) There was, of course, plenty of alcohol involved for celebrants and spectators.

The intent of the whipping wasn’t punitive, and women only pretend to run away from lashes that were believed to enhance their fertility. It may be that the lashes symbolized penetration. After 276 BCE, women were actually encouraged to expose their flesh, too. However, eventually, the men were apparently covering their genitals with loincloths for relative modesty by the time of Christ.

An interesting historical side note. Julius Caesar was offered the throne when Marc Antony placed a wreath on his head as the future emperor watched the Lupercalia festivities. It may be time to rework your mental image of that as being short at least one toga. Antony, as a Juliiian, would have been oiled and stark naked when he approached Caesar with the crown. 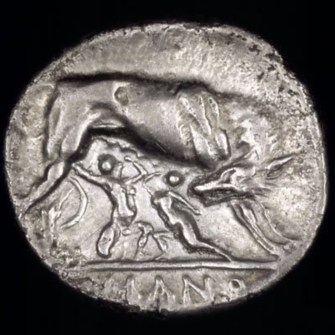 And then there’s Lupercus

While the day of Lupercalia involved sharing tales of the Roman Faunus — who bestowed fruitfulness on “field and flocks” — the day was named for Lupercus. According to the Encyclopedia Mythica, Lupercus was an ancient Italian god who was both protector of their sheep from wolves, and a provider of fertility. The Latin root of the name is lupus, or wolf.

Getting it out of your system

Considering that the Romans’ new year began in March, it’s likely that at least one aspect of Lupercalia was a cleansing of the spirit to start fresh at the new year. The sacrifices and bloody young men seem to fit with this idea, as might the wanton drunkenness and general debauchery of the festival. (There’s said to be some overlap between Faunus and Pan.)

For today’s self-proclaimed pagans, Valentine’s Day still contains themes from Lupercalia, regardless of the degree to which the wilder aspects have been tamed. Paganhumanismcanada considers it, “A sacred and religious celebration of human sexuality and passion, many of the elements and themes have been retained: valentine’s cards [versus februare], red heart shapes, single people going home with partners, married women wanting children, lust, sex, fertility.” While there appears to be no universal way to commemorate this day of the wolf, some have devised their own symbolic rituals.

All of which brings us back to Valentine’s Day

Of course, depending on who you ask, Valentine’s Day can be every bit as unpleasant as Lupercalia sounds: It’s the time of year for an involuntary inventory of one’s love life. Singles and those with unhappy connexions can instead celebrate Anti-Valentine’s Day. For those whose long-term relationship has settled more into a partnership, it’s likely to be met with a household decision to save the candy/flowers/gift money for something more practical.

On the other hand, if for you relationships merit nurturing and romance a refresher, try and put Lupercalia out of mind and seize the day to sweetly make your case, pagan or otherwise.

There are different types of atheism and atheists. In general, they can be classified as the non-religious, the non-believers, and agnostics.
Culture & Religion

Harmony and moderation make for a happier life.
13.8

The quantum world is one in which rules that are completely foreign to our everyday experience dictate bizarre behavior.
Up Next
The Present