Happy Imbolc! As it tends to be with pagan holidays, Celtic and Irish Imbolc is different things to different people and at different times. “Imbolc” is from the Celtic i mbolg, which means”in the belly,” probably a reference to pregnant livestock at this time of year, mostly ewes, carrying their offspring to term in the spring. It was also called Oimelc, which means “milk of ewes.”

Imbolc represents a hopeful moment as the seasons begin to turn from darkest winter to the promise of spring: new life — fertility — renewal, and the return of the warming sun. In 2019, appropriately enough, February 1 was the day that one of the most extreme periods of cold ever experienced in the U.S. finally broke.

As website Claddagh Designs puts it wryly: “The hardest part of the year was over; adverse weather, cold temperatures, food rationing, and of course, no warfare (an integral part of Celtic society) would soon be a thing of the past. Farmers were getting ready to go back to work, preparing animals for breeding, warriors were picking up their weapons again, and the political and social aspects of life that had been put on hold for winter were also beginning again.”

Given the importance of agriculture and sunlight to ancient cultures, it’s not a surprise that Imbolc dates back to Neolithic times, as evidenced by the way in which some monuments of that era — such as Mound of the Hostages at Tara in Ireland — contain passageways that align with sunrise on Imbolc and its autumnal cousin Samhain. The arrival of Christianity brought with it the association with St. Brigid, believed by some to have replaced the goddess Bhrigid. More on her/them later. 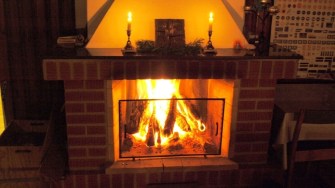 As with any good festival, Imbolc involves feasting, particularly of home-and-hearth edibles stored over the winter, such as breads, grains, onions, and potatoes.

In keeping with the (eventual) return of the sun, fire is a big part of Imbolc. Beyond spectacular public displays of fire, candles are lit all around celebrants’ houses. In earlier times, hearths would burn through the Imbolc night, and if a house was made of non-flammable stone, multiple fires were lit.

People visit wells on Imbolc, particularly holy wells, circling them in the same direction of the sun and praying for a good year ahead. Afterward, coins and pieces of cloth called “clooties” may be left as offerings.

Leading up to the holiday, people make Brigid’s crosses that can be hung up around their houses in celebration of Imbolc. Another popular item is the green brat Bhride, or Bhrigid’s mantle. Its origin is an offer of property made to the young Bhrigid/Brigid for an abbey she wished to build. The king told her she could have as much property as she could cover with her cloak. Using magic, she increased the size of the cloak until it was so massive it covered all the land she needed.

Today, women fashion their own Bhrigid’s mantles of green cloth for wrapping around their shoulders, and it’s believed that leaving such a mantle on the hearth allows Bhrigid to visit and bless it on Imbolc each year, making the mantle more and more imbued with her magic with each passing Imbolc. 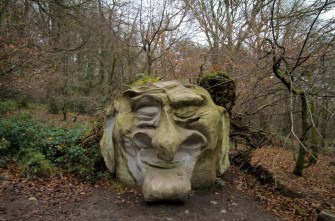 As with modern Groundhog Day on February 1, the weather on Imbolc foretells the future: An Imbolc with nasty weather signifies a great summer on the way. This may seem backwards at first glance, but here’s how it works.

It all has to do with the heating needs of the forest hag Cailleach, the goddess of winter. If winter is to go on for a while, Cailleach needs more firewood. She thus spends Imbolc searching the forests for it, and since she prefers to be out in the woods on a sunny and dry day, that’s what the day provides. Bad weather, on the other hand, is good news: It means that Cailleach has no need for wood, what with spring just around the corner, and has decided to stay in and snooze a bit more. 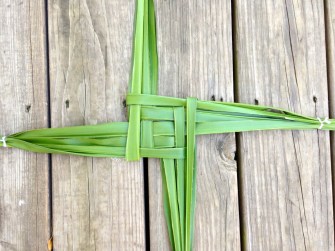 The true history of how Imbolc came to its connection to St. Brigit is a little unclear.

The commonly told version is that she was preceded by the daughter of the Dagda in Irish mythology. He was an early invader and one of the Tuatha de Danaan. His daughter’s name, “Bhrigid,” is from the Celtic brig, for “exalted one.” She was actually one of a trio, all of whom were named Bhrigid, and who were understood to represent three aspects of a single goddess. Hence, Bhrigid was considered a triple goddess. Bhrigid was known for looking after healers, magicians, poets, and bards, and she was gifted at divination and prophecy. She also protected pregnant women and their infants; hence contemporary Bhrigid mantles are said to protect them as well.

A flame was secretly kept burning in Bhrigid’s honor at the abbey she founded in Kildare, Ireland, and this flame — and the abbey — may have helped connect her to the later Christian St. Brigit. Lisa Lawrence suggests as much when she writes, in her Pagan Imagery in the Early Lives of Brigit, that,”When two religious systems interact, a shared symbol can provide a bridge from one religious idea to another. During a period of conversion, an archetypical symbol such as fire may acquire a new referent, while not being entirely emptied of a previous one. For example, the fire that clearly signifies the presence of the Holy Spirit in Saint Brigit may continue to signify pagan conceptions of religious power.”

St. Brigid, on the other hand, was born in Faughart, County Louth in Ireland, and died sometime around 525. She was a devoted servant of the Church, and founder of religious communities in Ireland — likely the reason she was made a saint. she’s also credited with founding the same Kildare abbey allegedly built by Bhrigid, one example of how the histories of these two women have become so interwoven that they’re impossible to separate. Their identities have progressively merged since goddess Bhrigid’s day became St. Brigid’s day after the latter’s death.

Adding more confusion to the story is the apparent case that the first written reference to the goddess Bhrigid appeared in the 10th century, long after St. Brigid had become the focus of Imbolc. Newgrange.com suggests, “So it could be argued that 5th century Saint Brigid predates the goddess Brigid.” Or perhaps it’s just a whisper of Outlander-style standing-stone time travel we can add to an already a magical story.

All roads may not lead to Rome, but many of them lead to wealth and prosperity — even 1,500 years after the fall of the Roman Empire.
Up Next
Think Again Podcasts

Why does Faulkner use “inchoate” so much? Maybe because Benjamin Dreyer wasn’t his copy editor. The author of DREYER’S ENGLISH is here to remind us that there’s no absolute authority on the English language. Still, please avoid “onboarding”.