For as long as there has been humankind, there has been celebration. Whether it’s the changing of the seasons or worshipping of some deity or idea, we’ll always have a cause for revelry.

Here are 10 of the greatest ancient and pagan holidays.

The winter solstice is a time to rejoice and stave away the eroding day. Our current crop of tradition is indebted to the great Roman festival of Saturnalia, a solstice celebration that’s dedicated to Saturn, god of time and agriculture. Christmas and a whole bunch of Christian themed traditions borrowed liberally from this pagan holiday.

Originally starting as a one day celebration in early December, this festival grew to be a riotous week-long affair. Social norms fell to the wayside and every Roman citizen from the greatest to the lowest lived in a sea of hedonistic excess. Masters would serve their slaves, momentary kings would be made to preside over the festivities. Gift giving, drinking and feasting was there a plenty. 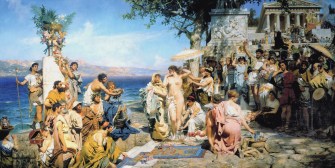 Located less than 30 miles from Athens, Greece, Eleusis was home to a mystery cult. The road from Athens to the town was a great pilgrimage that many who lived during the Grecian period would take at least once in their lifetime.

The rituals were centered around the harvest cycles and based on the Greek story of Demeter and her daughter Persephone who was carried to the underworld by Hades. Taking place in ancient Greece and suggested to be based off of Mycenaean traditions stretching back to 1,500 BCE, the Eleusinian Mysteries were a staple mystical and historical event. For over two thousand years, people flocked to Eleusis to take part in this secretive celebration. Many scholars now believe that this might have been centered around a psychedelic session. All men and women regardless of status journeyed to drink a substance called kykeon.

The temple that housed the mysteries was destroyed in 170 AD and then rebuilt by Marcus Aurelius. After the spread of Christianity, the rites fell of out favor with the masses before Alaric, King of the Goths would destroy and desecrate this once holy place in 396 AD. 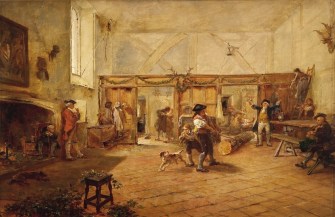 Celtic and Norsemen of Northern Europe believed that the sun’s light was a wheel that changed and circulated the seasons. It is believed that the word for wheel, houl, would eventually lead to the holiday called Yule.

This mid-winter festival saw the men and women of the north lighting bonfires, telling tales and drinking sweet ale. Druids of the time began to light yule logs, as the Celts believed that the sun would stand still for 12 days of the year in the middle of winter. During this time it was thought that the log needed to be lit to conquer and banish evil spirits in the darkness.

Again, many of these Yule customs are still followed today as Christians throughout the years incorporated it into holidays like Christmas.

Book of the Dead

New Years Day used to come a little bit early for the ancient Egyptians. This feast was an ever changing holiday as it was dependent on the inundation of the Nile River. Wepet Renpet celebrated the death and rebirth cycle of Osiris, as well as the rejuvenation of the Nile and fertile land surrounding it. 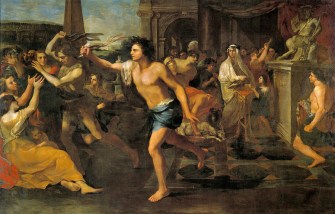 Feast of Lupercalia by Andrea Camassei

Lupercalia was a pagan festival held in Rome each year on February 15th. Many scholars believe that Valentine’s day is derived from this holiday, even though it’s named after a martyred Christian saint.

Don’t expect any lovelorn poets twiddling their thumbs reminiscing of unrequited loves or banal dates in antiseptic restaurants during this ancient take on Valentine’s day. Lupercalia was a bloody, hyper-sexualized and, at times, sadistic celebration for the Romans. Packed with animal sacrifice, and random flings to ward off infertility, this was the time to engage in a wild and frenzied bacchanalia.

Once the sacrifices and feasting simmered down, the men of the festivities, or Luperci, as they called them, would cut throngs off of newly sacrificed goats and go around whipping random women in the streets. The women at this time welcomed the lashes and gladly bared their skin to be consecrated in this fertility rite.

Later on, men would choose a woman’s name from the jar and get intimate with them for the night. Oftentimes, this new coupling would stay together afterwards and even get married later on. 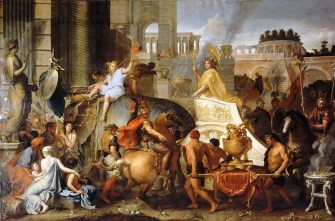 Entry of ALexandr into Babylon by Charles Le Bun

In Babylonia, the festival of Akitu was a time to celebrate the new dawning spring. The rites focused on the story surrounding the God Marduk and his marriage to the Earth goddess Ishtar. They would arrange a wide pantheon of gods on a table during their feasts. The story was that Marduk would journey into the night to wed his goddess Ishtar.

During this time it was believed that earth and heaven were united as the gods coupled together. The kings of this time would play the role and marry the high priestess of Esagila. Poems and other stories would be recited for this occasion. 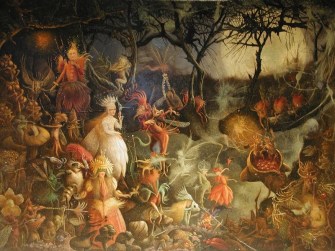 Samhain was one of the four major Celtic festivals, which also consisted of Beltane, Imbolc, and Lughnasadh, which all represented the different seasons. Samhain was eventually taken by Christians to be merged with All Hallow’s eve and become Halloween.

It was widely celebrated in modern day England, Scotland, Ireland and the Isle of Man. Held on the night of October 31st through November 1st it was filled with many of the traditions we now relate with Halloween. During Samhain, crops were harvested and Druids would start great bonfires and host feasts in the dead of night. 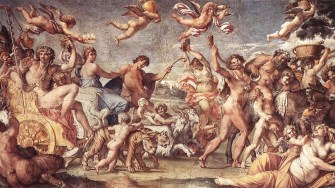 Liberalia was an ancient feast and rite of passage as young Roman boys passed into manhood at around the age of 15 or 16. They’d remove their bulla praetexta, a charm meant to protect them and ward off evil spirits. During the Liberalia ceremony, the boys would place their bulla on the altar with a lock of their hair or facial hair and dedicate it to the gods of the household, Lares.

The celebration occurred around the Ides of March — an infamous holiday of sorts respecting the assassination of Julius Caesar. The boys would don new purple clothing to signify themselves becoming full citizens of Rome.

Liber Pater was a god of fertility and similar to Bacchus. Liber’s female priests would don wreaths of ivy and serve cakes of oil and honey which the new adepts would sacrifice. Ovid wrote about the festival in his almanac.

The Great Dionysia was a dramatic festival that centered around the theater. It is believed that many of the great modes of tragedy, comedy and satyric drama originated from this time. It was held in Athens during March and honored Dionysus. Great choral hymns were told and some of the earliest stories by Aeschylus come from this time around 472 BCE.

All Athenian citizens and many other visitors from Greece would attend the festivals. There was competitions between poets who would write, produce and act in their tragedies. The best would be chosen by judges who would then award a prize to the best poet.

Imbolc, also known as Imbolg is one of the more obscure festivals of the Celts. It was celebrated in the beginning of the year around February 1st to the 2nd. It was the middle point between the winter solstice and spring equinox in both Ireland and Scotland. Many modern day neopagans still celebrate this tradition.

The holiday is also sometimes aligned with the first day of spring. Some of the earliest mentions of this holiday come from Irish literature sometime in the 10th century. Poets of that era related the holiday to ewe’s milk and the breeding cycle of sheep.

Imbolc celebrations center around the reverence of the pagan goddess Brigid. She evoked the fertility rites and oversaw other aspects of artistic expression. Eventually, Brigid would be adopted as a Christian idol titled St. Brigid. The Catholic church claims that St. Brigid was a real person. She is the patron saint of Irish nuns, newborns and dairy maids, among other things. She shares a commonality with the goddess Brigid worthy of suspicion.

Tags
ancient worldchristianityhistorysociety
In this article
ancient worldchristianityhistorysociety
Related
High Culture
Why are flood myths so common in stories from ancient cultures around the world?
Could the prevalence of flood myths around the world tell us something about early human migration or even the way our brains work?
The Past
The Wild West was lawless and chaotic — and the police helped keep it that way
Lawmen and outlaws were often the same people.
Thinking
6 great philosophers and how they used their political power
Most philosophers merely contemplate the world, but what about the ones who actually tried to change it?
The Past
Ancient migration: Bering Strait land bridge from Asia to North America was not a one-way road
Ancient humans crossed the Bering Strait land bridge from Asia into North America. But some of them went back.
High Culture
Did Paul Cézanne hide an early self-portrait underneath a 160-year-old still life?
To answer that question, we may have to figure out when the famed painter started to go bald.
Up Next
It Takes Courage to Go From Very Good to Great
Eric Weinstein, Managing Director of Thiel Capital, doesn’t see the journey from excellent to extraordinary as being a continuum, exactly. You don’t get better and better and better and then […]