A 1,200-year-old temple to Norse gods like Thor, Odin, and Freyr has been unearthed in Norway by a team of archaeologists.

The discovery is a breathtakingly rare remnant of the Viking religion built centuries prior to Christianity’s introduction, and eventual dominance, across the land. 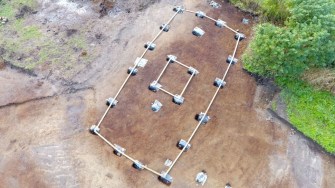 Aerial view of the “godhouse.” Photo courtesy of the University Museum of Bergen

The building remains were unearthed by archaeologists from the University Museum of Bergen in September at the seaside village of Ose located in western Norway ahead of preparations for a new housing development project. Based on the placement of post holes and other artifacts, the team was able to determine the structure of the god house and how it was used.

The large wooden building was about 45 feet long, 26 feet wide, and 40 feet high, and is thought by archaeologists to date from the end of the eighth century. The building’s layout is almost identical to late Iron Age god houses found at Uppåkra in southern Sweden and Tissø in Denmark, but this is the first temple of its kind found in Norway according to archaeologist and architect Søren Diinhoff who led the project.

“We have discovered the most perfectly shaped god house of all the finds so far — I know of no other Scandinavian buildings in which the house construction is as clear as it is here,” Diinhoff told Syfy Wire‘s Elizabeth Rayne. “I think our building is central to document and verify this very special architecture.”

Diinhoff told Live Science that god houses at Ose followed the architectural blueprint of Christian basilicas that travelers would have come across in southern regions. Because of this, Old Norse religious temples of this time are characterized by a high tower looming above a pitched roof, similar to early Christian churches. At the site were also a number of cooking pits for preparing religious feats, and a collection of bones — the remains of animal sacrifices.

Their excavations also revealed traces of early agricultural settlements dating to between 2,000 and 2,500 years ago, including the remains of two longhouses — large wooden halls typically covered with turf and thatch and used as communal habitations. According to Diinhoff, they would have each been the center of a small farm for a family and their animals.

Later in the sixth century is when the Norse began to construct large “god houses.” These were complex outdoor worship sites dedicated to deities of the Norse pantheon including the fertility god Freyer, the war god Odin, and the storm god Thor. This suggests the worship was more than a small cult or folk practice. Rather, it likely had something to do with elite classes wanting to put on an ideological spectacle. As high-status families began to take control of the earlier religious cults, Norse religious worship became more organized.

The temple at Ose was likely used for celebrations and sacrifices to gods during the midsummer and midwinter solstices (the shortest and longest days of the year), which would have been highly revered cosmological events for agrarian societies like the Old Norse. Several years ago, a “phallus” stone was found nearby the excavation site. According to Diinhoff, it was likely a part of Old Norse fertility rituals.

Festivals in which meat, drinks, and treasures were offered to wooden figurines representing the gods would have also taken place. While the gods consumed the spiritual essence of the food and drink, practitioners were able to enjoy the material of the feast.

“You would have a good mood, a lot of eating and a lot of drinking,” Diinhoff said to Live Science. “I think they would have had a good time.”

Iceland’s First Asatru Temple in 1000 years will soon be readywww.youtube.com

Unfortunately, the party was brought to an end during the 11th century. It was then that Norway’s rulers imposed Christianity onto the population. As a result, pagan religious structures were torn down and burned, and Norse gods were demonized. There’s currently no evidence suggesting that Ose’s god house was part of the iconoclastic purge, but Diinhoff and his team would like to find out in further work.

Recently, the Norse pagan religions have made a comeback. For example, an Icelandic neopagan faith group called the Ásatrú Association of Iceland, is currently one of the country’s fastest growing religions. Over the last decade, it’s almost quadrupled its membership going from a (granted, low) base of 1,275 people in 2009 to 4,473 in 2018. The association is constructing the first temple to the Norse gods in 1000 years in the City of Reykjavík. The project began in 2017 and after running into a funding roadblock, it’s expected to be completed later this year.

It has been 50 years since an American has claimed the title of World Chess Champion. Will it ever happen again?
13.8

It is time to give the Russian cosmologist the credit he deserves.
Health

A study describes how researchers conducted the first successful DNA sequencing on ancient Egyptian mummies.
Up Next
Health