Ken MacLeod is the multiple award-winning author of many science fiction novels, including the Fall Revolution quartet, the Engines of Light trilogy ("Cosmonaut Keep," "Dark Light," and "Engine City"), and[…]
Go to Profile 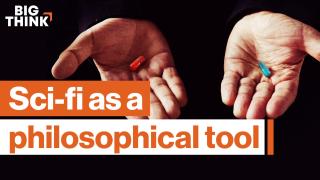 Technology of the future is shaped by the questions we ask and the ethical decisions we make today.
▸
5 min
—
with
Ken MacLeod

KEN MACLEOD: There's so much unrealized potential in science fiction. It asks the most profound questions. We were there at the airship and the airplane and the atomic bomb, and we're still with you. We are in the beginnings of what's being called the fourth industrial revolution, and the application of AI to many, many areas that go beyond routine clerical work. But even a fully-automated world is not beyond having to make hard choices. Science fiction can help us to look at the social consequences, to understand the technologies that are beginning to change our lives.

JOAQUIN PHOENIX: Do you have a name?
SCARLETT JOHANSSON: Samantha.

MACLEOD: Science fiction, for me, was this adventure playground for different social and political ideas. In Kim Stanley Robinson's "Red Mars," he has a comment: "They fancied themselves apolitical technicians and naturally as a result, were complete putty in the hands of their political masters." And that is the great danger of being a technologist, thinking that you're not affected by politics.

DR. FRANKENSTEIN: Now I know what it feels like to be God.

MACLEOD: The robot in the modern sense, unquestionably begins with "Rossum's Universal Robots," written by Karel Čapek in Prague in 1919. The very word robot derives from the Czech word for laborer, particularly a forced laborer. It very clearly establishes the trope of robots as entities that could revolt against their human masters. The first World War had just been brought to an end by the Russian Revolution of 1917 and the German Revolution of November 1918. The imagery of both workers uprisings and slave uprisings is very present in that play. The robots send out an international manifesto, for example.

In the 1930s and '40s, Asimov's invention of the Three Laws of Robotics civilized the idea of the robot as an image of a worker. Robots in science fiction exist as metaphors for anxieties about labor, about class struggle, about intelligence itself. They have very little to do with the actual machine that will, for example, builds cars on the production line. The problem with that is that the science fiction version of the robot is of very little help at all in understanding what the real problems and the real opportunities actually are. To take a simple example from the military field, if we worry about the Terminator, we'll never be asking the proper ethical questions about autonomous killer robots.

The issue raised in "Frankenstein" is not so much, "Is the creation dangerous," as, "Are we worthy to create it?" And this issue arises very profoundly when we are creating systems onto which we project intelligence. Autonomous killer robots, they're a very bad idea who's time has come, but none of these developments are inevitable. They're all the consequences of human actions, and we can always step back and say, "Do we really want to do this?" Science fiction inspired scores, hundreds, perhaps thousands of people to study, to become engineers, but it really is very important every so often to look up from your work and ask, "Who am I doing this for?"