Octavian had a bone to pick with Mark Antony. The latter claimed the Eastern Roman Empire as he moved in with his lover, Cleopatra. Octavian wasn’t having it. He read Antony’s official will and testament on the Senate floor in Rome. The document described how Antony was planning on leaving everything to his cunning Egyptian mistress and their children, an idea poking at the many fears and biases Romans held of powerful women. Being a foreigner didn’t help Cleopatra. Antony was made out to be a traitor.

The problem? The document was possibly fake.

Whether or not it was actually fake will likely never be known. Octavian’s propaganda mission is certainly true, however. He even sketched anti-Antony slogans into coins to denounce his rival. Only the fate of the Roman Empire hinged on their battle.

Disinformation is nothing new. In 1835, the New York Sun published a half-dozen articles about the discovery of life on the moon. The radio broadcast of H.G. Wells’s “The War of the Worlds” will not be forgotten anytime soon. Nazi propaganda was so effective that a small percentage of people today believe the Holocaust never happened. People even believe vaccines cause autism.

A convergence of forces produced the dizzying array of propaganda and disinformation in our world today: political manipulation; willful ignorance; social media; anti-intellectualism; scientific ignorance; YouTube. The question is not whether or not disinformation will always exist—it will—the question is how to fight it. For that, we should consider Sophism.

That’s the suggestion of Yale University lecturer and CNN analyst Asha Rangappa and American political rhetoric historian Jennifer Mercieca. While they note Plato’s skepticism of Sophistry, they believe “clever rhetorical tricks” used by Sophists were necessary for a democracy to function.

The Sophists (A History of Western Thought 8)www.youtube.com

Initially, Sophists secured wealthy clients. In exchange for payment, they taught education and rhetoric, as well as music and other arts. Philosophers such as Socrates, Plato, Aristotle, and Xenophon were not fans; they believed Sophistry to be a lowly endeavor designed to sound deep. Socrates sang the praises of Truth (Sophia) alone; his student, Plato, thought Sophist rhetoric manipulated audiences. Sophistry could never lead to Sophia.

Mercieca and Rangappa believe Plato’s dialectic was not sufficient to resolve political decisions, however. Socrates’s insistence on Truth is debatable, as decades of neuroscience research on memory and perception now tell us. Arriving at one Truth on a planet of nearly eight billion people is impossible; we aren’t designed to handle such volumes of data. Even 2,500 years ago, the Sophists strove for Phronesis, or practical truth. They knew that nuance matters.

“Sophists taught the skill necessary for the practice of democracy—how to reach consensus about the truth. They taught people how to create arguments, to persuade audiences to believe their side, and to solve thorny political problems.”

Mercieca, a professor, and Rangappa, a lawyer, argue that their professions are more like sophistry than philosophy. Whereas sophistry is usually portrayed as disingenuous, it accurately reflects the shared reality we experience in society.

We shouldn’t get caught up in the current usage of sophistry. Words change meaning over time: the Hindu svastik, “auspicious,” was co-opted by the Nazis; mythology, with an etymological root meaning “legend” or “story,” became synonymous with myth, a falsity. Mythologies are the foundations of cultures, not fabrications.

Employed correctly, sophistry presents an argument that builds into a practical truth, not the Ultimate Truth. In this sense, Sophists and Buddhists share common ground in their love of debates. Monks have a long tradition of critical inquiry often accentuated with hand claps or loud syllables. A handclap (or for that matter, a koan) doesn’t sound like a path to truth, yet in the right circumstance it reveals profound meaning. Not all learning is logical.

Debates are essential for democracy. Sadly, social media platforms are designed more for unfriending and trolling than introspection and dialogue. Screens are poor replacements for pantomimes. You read text in your voice instead of the writer’s, skewing your understanding of their argument. Lack of intimate contact instigates retreat. You believe the fight is over when the bell hasn’t even signaled round one. 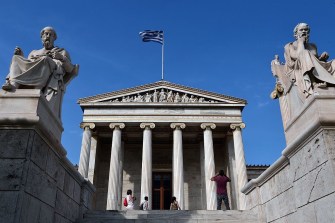 Disinformation is especially insidious in the digital age. Social media platforms allow for the quick spread of conspiracy theories. A particularly sophomoric form of persuasion is currently practiced by wellness influencers, who claim to be “just asking questions” while sharing anti-vaxx and anti-5G rhetoric. They then pretend to “not take sides.” The problem, as Merciera and Rangappa allude to in the following sentiment, is that propaganda disguised as philosophy promotes an mindset made infamous by George Bush the younger: “You’re either with us or against us.”

“Propaganda and disinformation are persuasion without consent: In fact, by offering new versions of “facts,” their authors try to hide that they’re persuading us at all. These forms of communication provide a conclusion based on manipulation rather than reason. Propaganda and disinformation create a realm where disbelief is disloyalty, rather than a shared attempt to search for truth.”

Propaganda is compliance, they continue, the preferred vehicle for authoritarians. (Likewise, Plato wasn’t a big fan of democracy; he didn’t think everyone could access Truth.) Bringing it home to today, the authors cite Twitter fact-checking Trump: an old democratic method, yet one sadly ill-equipped to handle Truth when anything that questions the king is taking a “side.” This trend of being “all in” for charismatic figures leaves us on shaky ground. It’s how cults form.

A healthy democracy, they conclude, should promote curiosity and debate, tactics more aligned with Sophism than the search for an absolute yet ever-elusive Truth.

“Accusations—rather than argument—and compliance—rather than persuasion—are incompatible with a democratic dialogue. The ancient Greeks rejected unquestioned propaganda and disinformation as well outside of democratic norms. So should we.”

America isn’t healthy. Our modern Octavian does far more damage than print slogans on coins. This administration has helped foment social conditions that reward vitriol over curiosity. Until a mechanism for questioning propaganda is invented—be it technologically or, more likely, rebooting the operating systems nature has endowed us with—constructive debate will always seem like ancient history.

Tags
ancient worlddemocracygovernmentmediaphilosophypolitics
In this article
ancient worlddemocracygovernmentmediaphilosophypolitics
Related
Thinking
Why you should laugh at yourself, according to Seneca and Nietzsche
“It is more human to laugh at life than to lament it.”
13.8
Why the origin of life and the Universe itself might be forever unknowable
There might be a hard limit to our knowledge of the Universe.
Thinking
Bonhoeffer’s “theory of stupidity”: We have more to fear from stupid people than evil ones
Evil is easy to identify and fight against; not so with stupidity.
Thinking
Can’t move on? Here’s what the Buddhist idea of anattā teaches about letting go
Give yourself (and others) a break.
Thinking
Physics is in crisis. Quantum cosmology can save it and point us toward the theory of everything
“Once quantum mechanics is applied to the entire cosmos, it uncovers a three-thousand-year-old idea.”
Up Next
The Present
Politics really do alter your perception of reality
According to Harvard economists, Democrats and Republicans both perceive reality very wrong.