There are certain debates we may never reach a consensus on. In philosophy, those perennial problems circle around questions of free will, the birth of consciousness, and the nature of mathematical objects. In politics, they focus on the size of government, how to establish a functional immigration system, and how to best promote equitable social mobility.

Unlike philosophy—which is arguably an a priori “armchair” discipline—political arguments can often be fact-checked against verifiable data. If the other side of the aisle bothered to test their beliefs against that information, we imagine, then surely their policy views would shift and the intractable problems of our partisan times could be resolved.

Obviously, it won’t be that easy. According to a working paper by Harvard economists, political beliefs don’t just shape our convictions; they shape our perception of objective reality.

The paper is being written by Stefanie Stantcheva, a professor of economics at Harvard University, and Armando Miano, a doctoral candidate. Famed economist Albert Alesina also worked on the paper until his tragic death earlier this year.

According to Stantcheva, the impetus for the research was to get into people’s heads to see what really drives their policy views. As she told the Harvard Gazette:

“One thing that we’ve been doing a lot is to study what we can observe…like what people actually do, what people learn, and what people decide. What we really have not known until now so much is: What’s going on in the background? How do people think about their decisions? How do they decide which policies to support or not? How do they reason about these?”

To answer those questions, the researchers sent detailed surveys to thousands of respondents. The surveys covered topics such as social mobility, tax policy, social inequality, and immigration.

To the surprise of no one, Republicans and Democrats sported different views. The difference proved even wider when comparing respondents who did or did not vote for President Donald Trump. But which group had a more distorted view of reality?

As Stantcheva summed it up, “One group is not necessarily more wrong than the other. Everybody’s quite wrong.” 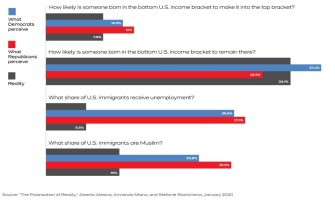 A graph showing Democrat and Republican perceptions of politically-charged facts against the reality of those facts.(Photo: Alberto Alesina, Armando Miano, and Stefanie Stantcheva/ Harvard Gazette))

For their survey on social mobility, the researchers asked respondents how likely children born in the bottom quintile could rise to the top income bracket. Republicans believed the probability to be 12 percent, while Democrats thought it was 10.5 percent. The true probability is 7.8 percent.

To establish causality, the researchers provided a randomly-selected group of respondents with information about social mobility. For example, they may prime respondents with data showing the high probability that rich families stay rich, while poor children struggle to even reach the middle class. The controls received no such information.

Seeing such information made the experimental respondents more pessimistic of social mobility; however, only Democrats became more supportive of progressive social programs. Republicans tended to view the government as the problem, showing that the same factual information “translate[d] into political preferences in different ways based on their other existing perceptions.”

“How much you’re going to change your belief as a function of that information is going to depend on the weight you put on it, and that weight will depend on what you already think,” Stantcheva told the Gazette. “Without interruption, it’s just a cycle that will reinforce itself.”

The researchers found a similar pattern with their tax policy survey. For example, Republicans and Democrats both underestimated the top income tax rate to be 31 percent and 25 percent respectively. It’s 37 percent.

Recent data from the Bureau of Labor Statistics shows that in 2019 only 3.1 percent of foreign-born workers were unemployed—less than the 3.8 percentage of native-born workers.

How do misperceptions persist despite verifiable facts being a mere Google search away?

One reason, the researchers note, is that such issues are permeated by political narratives. Even if a signal cuts through that noise, we’re operating on different frequencies. As shown in the social mobility survey, our perceptions will lead us to weigh its value based on its narrative use, not its empirical merit.

They also note that the demand for accurate information is politically charged, too. In one experiment, respondents were allowed to pay a randomized amount to receive accurate information about immigration in the United States. Care to guess who was least likely to pony up?

“The people who most need the information are going to be the least likely to seek out that information. It seems that either they don’t realize that they’re wrong, or they’re just very entrenched in their beliefs, and do not want their beliefs to be changed,” Stantcheva told the Gazette.

But Stantcheva and her fellow researchers aren’t entirely pessimistic about the future. By understanding the political thought process and how we create our own reality barriers, we may be able to intervene in that process and let a more accurate picture of reality seep through.