The growing incidence of antibiotic-resistant bacteria was already a worrying problem before we all started washing our hands with anti-bacterial soaps in response to SARS-CoV-2. While necessary, we may also have provided even more bacteria the opportunity to develop resistance. Such uncooperative bacteria can often be treated, but before they can, they have to first be identified as antibiotic-resistant — each time the precious meds capable of defeating such bacteria are deployed, we risk bacteria developing resistance to them. This would obviously render them useless, and so they’re administered only sparingly to bacteria that have tested as resistant. This testing takes time, and can be expensive.

Researchers at the Chinese Academy of Sciences, Changchun, Jilin province have a better idea: smart bandages that change color to indicate the nature of bacteria they cover. The study describing their research his published in ACS Central Science. 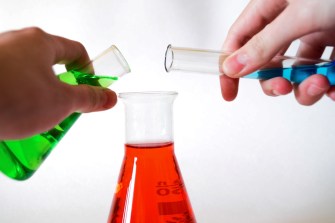 The smart coverings work by leveraging the chemistry of bacterial infections. Integrated into each covering is a metal organic framework (MOF), a structure that allows scientists to embed a few key chemicals in the bandages.

For detecting normal, antibiotic-sensitive bacteria, the bandages leverage the fact that a bacterial infection on your skin causes a reduction in its pH, making the skin more acidic. Each smart bandage contains a chemical called bromophenol blue, and when it encounters a more acidic environment, it turns yellow. Thus, when a smart bandage turns yellow, it’s telling you that bacteria is present, but that it’s antibiotic-sensitive.

If there’s no infection, the covering remains its original green color. 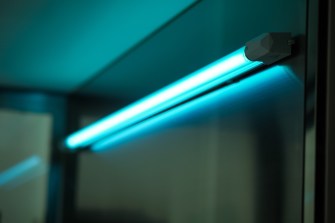 The bandages have so far been tested on mice who were infected with one of two different strains of E. Coli bacteria, one antibiotic-sensitive, and one antibiotic-resistant. The smart coverings over the mice’s wounds behaved as designed, turning the hoped-for colors over the course of a day or two. After some tweaking, that time — and the identification of bacteria — was reduced to just 2-4 hours.

An additional feature is that the design of their MOF causes UV light shined on them to produce reactive oxygen species (ROS) that puncture the protective membranes surrounding the bacterial cells. This restores their susceptibility to standard antibiotics, meaning that the bandages are both diagnostic and curative.

Given the construction simplicity of the bandages, the researchers are hopeful that they can be easily manufactured at scale to join the fight against antibiotic-resistant bacteria, which is currently credited with 700,000 deaths annually.

Being able to quickly identify resistant bacteria can help prolong the effectiveness of available treatments. As the study puts it, “Because of the “auto-obsolescence” of antibacterial treatments, it is an important issue in the current antibacterial field how to rationally use of existing antibiotics and overcome tolerance.”

Mycobacterium leprae, the bacteria that cause leprosy, have the surprising ability to grow and reverse aging in armadillo livers.
Up Next
Strange Maps

The periodic table also is a map – well, kind of

Can’t memorize all those elements? If you’re more into geography, perhaps this will help.