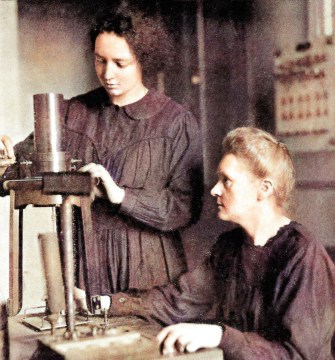 A colorised picture of Marie Curie (seated) and her daughter Irène, doing lab work. Marie discovered element 84 in 1898 and named it polonium, after her homeland, then under triple occupation.Image: public domain, CC BY-SA 4.0

I made it through high school with barely a glance at the periodic table. Chemistry – urgh. I preferred geography, obviously. However, had I known that so many elements are named after places on the map, perhaps I wouldn’t have had such a hard time of it. Here are all those elements, united in one map/table. Only a few decades late!

But first, a quick necessary brush-up for fellow periodic table-illiterates: 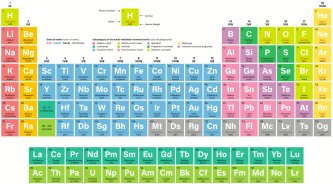 All 118 elements of the periodic table, arranged in seven periods (horizontal) and 18 groups (vertical). Those two rows at the bottom fit into the dark and light green squares in the third group. Image: Shutterstock 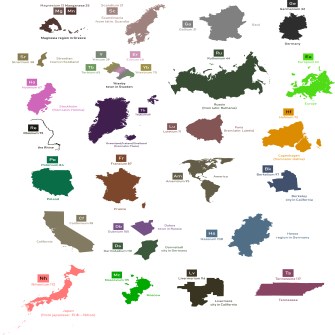 All of the elements named after places. France was used twice, but the crown goes to Ytterby, a small town in Sweden that gave its name to no less than four elements.Image: /u/dom_bul, reproduced with kind permission

In all, 16 of the 118 elements were named after persons, about a dozen after mythological creatures, most after some property of the element (dysprosium, atomic number 66, simply means ‘hard to get at’), and 29 after places – including four elements named after the same town in Sweden.

Both magnesium (Mg) and manganese (Mn) are named after the Greek region of Magnesia, where they were mined for their alchemical qualities. The region also gave its name to ‘magnet’, which originally means “stone from Magnesia”. Modern uses of magnesium include making lightweight alloys, and brightening the flash of fireworks. Manganese is used to strengthen steel.

Scandium (Sc) is named after Scandinavia, by way of its Latin name, Scandium. Its existence was predicted by Mendeleyev, who called it eka-boron. Scandium’s main practical use is as a component of Mercury-vapor lamps, used to light stadiums.

Gallium (Ga) was discovered in 1875 by the French chemist Paul Emile Lecoq de Boisbaudran. He named it after Gaul, an ancient and poetic term for France; but possibly also after himself, as his last name ‘le coq’ (‘rooster’) translates into Latin as ‘gallus’. Gallium has been used to stabilise the crystal structure in nuclear bombs.

In 1885, a mine in Saxony yielded a new mineral, which was named argyrodite. It turned out to be a combination of silver, sulphur, and a new element. The chemist Clemens Winkler first wanted to call this new element neptunium, in honor of the recently discovered planet. But since that name was already taken, he chose to name it after his homeland, Germania. Germanium (Ge) is an important material for semiconductors used in transistors.

Strontium (Sr) is named after the Scottish village of Strontian, where it was discovered in 1790 in a local lead mine. Initially called ‘the Scotch mineral’, later strontianite and strontites, its name was settled by Sir Humphry Davy, who was the first to isolate it, by electrolysis, in 1808. Strontium salts flame red when they burn, a property used in signal flares.

Ytterby is a Swedish town on the island of Resarö, in the Stockholm archipelago. An ancient mine near the town, used for quartz since the Middle Ages and feldspar since the late 1700s, is the single richest source of elemental discoveries in the world. Four elements are named directly after the town itself: yttrium (Y), terbium (Tb), erbium (Er) and ytterbium (Yb). Four others were also first found here: scandium, holmium and thulium (also on this map), and gadolinium, named after the Swedish-Finnish chemist Johan Gadolin.

The discovery of europium (Eu) is generally credited to Eugène-Anatole Demarçay, who isolated it in 1901 and gave it its name, after the continent.

Holmium (Ho) was discovered in 1878 in France by Jacques-Louis Soret and Marc Delafontaine (who called it ‘Element X’), and independently in Sweden by Per Teodor Cleve, who was the first to isolate it. He named it after Holmia, the Latin for the Swedish capital, Stockholm.

Discovered as an impurity in ytterbia, this element was independently found in 1907 by French scientist Georges Urbain, Austrian mineralogist Baron Carl Auer von Welsbach, and American chemist Charles James. Urbain proposed the names neoytterbium or lutecium; Welsbach proposed aldebaranium or cassiopeium. In 1909, the International Commission on Atomic Weights settled the dispute in Urbain’s favor. In 1949, the spelling was changed to lutetium (Lu); both derived from Lutetia, the Latin for Paris. But well into the 1950s, German-speaking chemists kept referring to this element as cassiopeium.

Discovered in 1923 by Dirk Coster and Georg von Hevesy in Copenhagen, hafnium (Ha) was named after the Latin name for the city, Hafnia. Today, Copenhagen University’s Science Faculty uses a stylised image of the hafnium atom in its seal.

Rhenium (Re) was discovered in 1925 by German scientists Walter Noddack, Ida Tacke and Otto Berg, who named it after the Rhine, which flows through their home region. It is the only element named after a river.

Discovered by Pierre and Marie Curie in 1898, polonium (Po) was named after Marie’s native country – to highlight the fact that it was under occupation. Poland at that time was partitioned between Prussia, Russia, and Austria-Hungary. In 2006, former KGB agent Alexander Litvinenko was murdered in London by someone who had put a tiny amount of polonium in his tea.

Provisionally named eka-caesium, its discovery was prematurely announced four times (the proposed names were ‘russium’, ‘alkalinium’, ‘virginium’ and ‘moldavium’). Finally discovered in 1939 at the Curie Institute in Paris, the name first proposed was ‘catium’, but eventually ‘francium’ was officially adopted – the second element named after the country. Francium is the last element discovered in nature. All following elements have been synthesised.

Americium (Am) was first synthesised, isolated, and identified in 1944 at the University of California in Berkeley by a team including Glenn Seaborg (to whom we owe the present layout of the periodic table, and after whom the element of seaborgium was later named). The discovery of americium was closely related to the Manhattan Project and was highly classified. Seaborg unintentionally revealed the discovery on “Quiz Kids,” a radio show for children, days before it was to be officially announced.

Also co-discovered by Seaborg (who was involved in identifying 10 elements, including plutonium), Berkelium (Bk) was named after the university city where it was first synthesised in 1949.

Another Seaborg co-production at Berkeley, this one was discovered in 1950 and called californium (Cf).

From the 1960s, the naming of some new elements beyond fermium (100) was a subject of the so-called ‘transfermium wars’, a controversy involving American and Soviet scientists (at their respective research centers in Berkely and Dubna) and, to a lesser extent, German scientists based in Darmstadt. For element 105, the Americans had initially suggested the name hahnium, the Russians nielsbohrium. The compromise solution was dubnium (Db), after the location of the Russian research center.

Another tug-of-war of the transfermium wars, element 110’s proposed names were hahnium (again) by the Americans, bequerelium by the Russians. In this case, the German suggestion darmstadium won the day.

Hassia is the Latin name for Hesse, the German state where the institute is located that discovered the element, in 1984. Hence, hassium (Hs).

Discovered by a Japanese team of scientists, nihonium (Nh) is named after a Japanese pronunciation of the country’s name: Nihon.

Although another suggestion was langevinium, for the scientist Paul Langevin, the discovery team from Dubna settled on moscovium (Mc), for the oblast where their institute is located. UFO conspiracy theorist Bob Lazar claims to have observed an alien spacecraft in Area 51that relied on a stable isotope of element 115 for its propulsion. At the time, circa 1990, moscovium had not yet been synthesised by earth scientists; all examples since have proved very unstable.

Livermorium (Lv) was first successfully synthesised in 2000, in a collaboration by the Joint Institute of Nuclear Research in Dubna (Russia) and the Lawrence Livermore National Laboratory in Livermore (California). It is named indirectly for Robert Livermore, a 19th-century English settler in California who gave his name to both a city and a walnut.

Named after Tennessee, the location of Vanderbilt University, which is cited as a co-discoverer of the element. The discovery of tennessine (Ts) in 2010 filled the last gap in the seventh period. Any new elements will be placed in a new, eighth period.

This map was made by Reddit user /u/dom_bul, who mentions that an earlier version included Cyprus (as the origin for ‘copper’), “but I learnt that it’s the island that takes the name from the metal and not the other way around.”

Tags
chemistryelementsmapperiodic tablescience
In this article
chemistryelementsmapperiodic tablescience
Related
The Past
How the death of alchemy gave birth to modern science
Far from practicing witchcraft, the experimentation of medieval alchemists helped bring about the Scientific Revolution.
The Present
Top 10 most popular stories on Big Think in 2022
These were the stories you clicked on the most.
Hard Science
What dead whales can teach us about finding aliens on Mars
Dead whales inspire a way to find extraterrestrial life on Mars.
The Future
Gallium: The liquid metal that could transform soft electronics
Bend it. Stretch it. Use it to conduct electricity.
Health
Do caffeine eye and skin creams actually work?
Caffeine does something, but it’s not clear exactly what.
Up Next
Starts With A Bang
What Are The Fifth And Sixth States Of Matter?
Solid, liquid, and gas are the three everyone learns. Plasma is the fourth. But there are two more, and they’re fascinating.How many states of matter are there? When you were […]