Isn’t it strange that you could probably predict which party an American belongs to simply by knowing where they stand on a few issues? Support gun control and environmental protections? Democrat. Concerned about immigration and strengthening the military? Republican. The New York Times even has a quiz you can take that’ll guess your party affiliation based on a few similar questions.

“The public now places less priority on economic and job concerns than it did just a few years ago,” the report reads. “At the same time, environmental protection and global climate change are rising on the public’s agenda for the president and Congress.”

Here are the top 7 issues, starting with the one that Americans are most divided on: climate change. 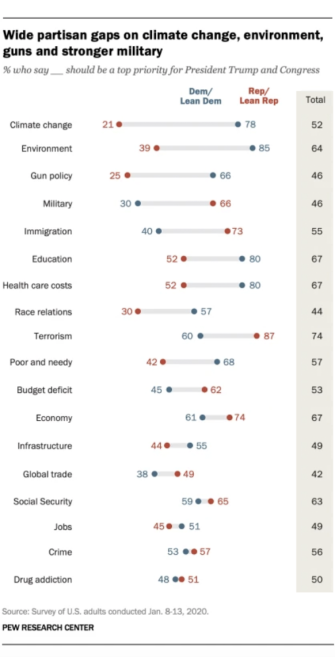 A majority of Americans say climate change should be a top priority for Congress and the president, marking a 14 percent increase from four years ago. But that concern is not bipartisan: 78 percent of Democrats called it a top policy priority in 2020, compared to just 21 percent of Republicans.

According to past Pew surveys, there’s been no other year in which the two parties have been more divided on climate change, and it was the most divisive issue among the issues covered in the recent survey. So what explains the gap?

“Voters take cues on their policy preferences and overall positions,” Dr. Riley Dunlap, a professor emeritus at Oklahoma State University, told The New York Times. “President Trump has, in the past, called climate change a hoax and all that. You get a similar message from many members of Congress on the Republican side. And most importantly, it’s the message you get from the conservative media.”

Environmentalism had bipartisan support when it emerged as a prominent political issue in the 1970s. Take, for example, this excerpt from a State of the Union address:

“Shall we make peace with nature and begin to make reparations for the damage we have done to our land, to our air, and to our water? It has become a common cause of all people of this country, clean air, open spaces. These should once again be the birthright of every American.”

That’s a quote from former President Richard Nixon. But today, concern about the environment seems to be much more prominent among Democrats. Pew Research Center writes:

“Overall, 85% of Democrats say protecting the environment should be a top priority for the president and Congress, up 11 percentage points from the share who said this in 2019. Fewer than half as many Republicans (39%) rate environmental protection as a major priority; still, this is up 8 points since last year and is the largest share of Republicans saying this in Pew Research Center surveys over the past decade.”

A 2019 Gallup poll found that Republicans’ concern over the quality of the environment and their desire for government step in to protect dropped both during the Bush and Trump administrations. Gallup said the trends reveal three key points: 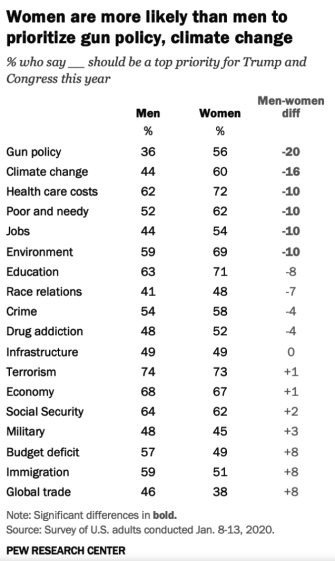 A separate Pew survey conducted in September 2019 found that support for gun control has gained modest support since 2017. The results showed that 71 percent of Americans favor banning high-capacity magazines, compared to 65 percent two years ago.

Republicans are more likely than Democrats to want to strengthen the military (66 percent versus 30 percent). What’s more, no other issue revealed a bigger chasm between the generations: Older Americans (65+) are 30 percent more likely than younger generations (19 to 29) to support bolstering the armed forces. Perhaps unsurprisingly, older Americans are also much more likely to support strengthening Social Security, while protecting the environment is a more important issue among young Americans. 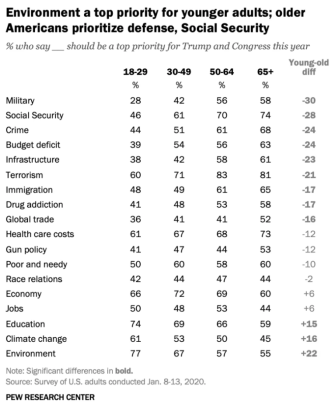 More than 1 million immigrants enter the U.S each year, mainly from India, Mexico, Cuba, and China. According to a 2019 Pew survey, about two-thirds of Americans have positive views on immigrants, saying they strengthen the country “because of their hard work and talents.” But in the recent Pew survey, Republicans were far more likely than Democrats to say dealing with immigration should be a top priority (73 percent compared to 40 percent). Men are also more likely than women to prioritize immigration (59 percent to 51 percent).

Overall, Americans ranked improving education in the top three most policy issues, with 67 percent support, according to the recent Pew survey. But only about half of Republicans said education is a top priority, compared to 80 percent of Democrats. Younger Americans are especially concerned about education, showing 74 percent support. It’s worth noting that this partisan gap has widened by 10 percentage points in just a year, according to Pew data.

The U.S. spends more than $10,000 per person on health care each year, making it the most expensive system in the world. Although a majority of Americans want to reduce the cost of health care, Democrats prioritize this issue higher than Republicans (80 percent to 52 percent support). Women also rank this issue higher than men, by 10 percentage points. Generationally, there wasn’t a huge gap in support for reducing health care costs, though the oldest generation did express the highest support (73 percent).