We write often on Big Think about cognitive biases, and researchers in England have just discovered a new one we didn’t know about. You may be thinking, “just what we needed (sigh),” but anything that helps us see through the ways we fool ourselves is worth knowing about. It’s called the “Spontaneous Preference For Own Theories,” or “SPOT,” effect.

You may be familiar with these classic cognitive biases:

Confirmation bias — This is a description of our tendency to wind up believing what we want to believe. We may cherry-pick evidence, or we may stop gathering it altogether once we’ve got “proof” that the conclusion we desire has been confirmed.

Endowment effect — We acquire things we like, yes, but we also like the things we’ve acquired. We believe a thing that’s ours has greater value than it really does just because we own it.

And now Aiden Gregg and colleagues at the University of Southampton have announced the SPOT effect, which is sort of a combination of all three. It posits that we’re more likely to believe a theory because it’s ours, and will even attempt to hold onto our faith in it in spite of mounting evidence.

The researchers conducted three separate studies. In each, they told subjects about fictional distant planet Wugworld on which live two species, one of which is predator, and the other of which is prey. In one study, they were called Niffites and Luupites. The idea was to create a scenario in which the subject would have no prior investment. (In one test, the species were Dassites and Fommites.) 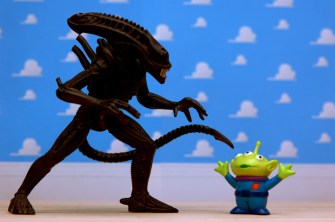 Each subject was asked to imagine one of two things:

The subjects were presented a series of seven facts about Wugworld, starting with some that supported the theory that Niffites were the predators — “Niffites are at least twice as large as Luupites.” — but changing over time to evidence that it was the Luupites who were actually the aggressors: “Luupites have been observed eating the dead bodies of Niffites.” After each new fact, the subjects were asked again if they still thought the theory was true.

The three studies mixed things up a bit, presenting the experiment to subjects together in a room, and separately online. In one test, the species were Dassites and Fommites, and in one there was no Alex. Regardless of setting, age, or gender, across all of the tests, subjects who imagined the theory to be their own stubbornly held onto it longer than those assessing of the same theory belonging to Alex or somebody else.

According to Gregg and his team, the SPOT effect isn’t super-strong, suggesting it to be more of an influence than expository. Still, one has to wonder how strong the effect would be when the theory in question is something someone actually cares about, and not one about made-up creatures far away on planet Wugworld.

Our brains did not evolve to shop on Amazon.
Neuropsych

Money can buy happiness — if you spend it on others, research suggests.
Neuropsych

Our brains believe $10 today is more tangible than $100 next year.
Neuropsych

The same parts of the brain that help us navigate complex social interactions can also drive us to make wildly bad investments.
The Present

Information economics suggests that “no news” means somebody is hiding something. But people are bad at noticing that.
Up Next
Technology & Innovation

How Much Does Wall Street Give Back?

Only 15% of Wall Street’s capital actually flows into the “real” economy, while much of the rest slushes around within Wall Street itself. As a result, the financial sector does not create the same opportunities for the real economy as it once did.