In retrospect, there were clear signs that the stock market bubble was about to burst in 2000.

The mid 1990s was a time of rapid technological growth and, consequently, wild speculation. Internet companies promised to transform the world. Dotcom stocks soared to incredible highs, with many multiplying in value shortly after initial public offerings, like Priceline, whose shares rose 1,000% just one month after going public.

But there were problems in 2000, ranging from a recession in Japan to the inevitability of the Federal Reserve raising interest rates. There was also the simple fact that most dotcom companies weren’t profitable. In fact, many were in debt.

Some investors realized this but bought into the story that huge profits were just around the corner. They weren’t. By 2001, most dotcom stocks had dropped at least 75 percent from their 52-week high, wiping about $1.75 trillion off the market.

But the dotcom bubble wasn’t the first asset bubble to inflate and burst, and it wasn’t the last. Unique factors contribute to each asset bubble, but all feature broad phases that are remarkably similar. And that’s largely because of the strong psychological pulls of herd mentality.

The science of ‘herd mentality’ | Your Brain on Money | Big Thinkwww.youtube.com

What is a stock market bubble?

A stock market bubble — or more broadly, an asset bubble — occurs when the price of an asset inflates far above what it’s fundamentally worth. Like soap bubbles, asset bubbles inevitably pop, causing a sharp drop in price. Asset bubbles can occur in any market — including stocks, real estate, and commodities — and they’ve existed ever since people have been trading in markets.

One of the earliest and most famous examples is the tulip mania that occurred in 17th century Europe during the Dutch Golden Age. Tulip bulbs became so fashionable that prices rapidly soared, with some rare bulbs reaching prices that far exceeded the average annual income of Dutch workers. Then the market suddenly crashed in 1637.

To get a conceptual grasp on how bubbles form, imagine a high school party that gets out of hand. The party starts with a few people, maybe hanging out at a kid’s house whose parents are out of town. A handful of other kids hear about the party and show up. Then word spreads among the whole class.

Afraid of missing out, carfulls of kids start showing up. Soon the house is packed with people. By midnight, a few wiser kids leave because it’s getting out of hand. The party keeps raging. But inevitably, the cops arrive and bust the party. Some of the kids who stayed too late suffer the consequences.

In retrospect, it was clear that the party was going to get busted. So why did people stay? One reason is that, like stock market bubbles, it’s impossible to predict exactly when the cops are going to show up — or, in other words, when collective emotions are going to shift from euphoria to panic.

In his 1986 book Stabilizing an Unstable Economy, the American economist Hyman Minsky gave a more technical description of how asset bubbles play out:

You can see these boom-and-bust cycles play out in markets throughout history, from tulips to Bitcoin. But what causes investors to keep inflating and popping stock market bubbles over and over again?

Conformity and the social brain network

Like other primates, humans are highly social creatures who model their behavior on what others are thinking, feeling, and doing. Over millions of years, the human brain has evolved to perceive social cues and use that information to strategically regulate our behavior. Social information is processed in multiple regions of the brain, which together make up the social brain network.

This network often helps us navigate social dilemmas. For example, if you’re visiting a foreign country for the first time, and you’re unsure of how to behave at, say, a religious site, you might copy the locals’ behavior so you don’t offend anybody and your visit goes smoothly.

But our tendency to copy others isn’t always adaptive; sometimes the herd is wrong. What’s strange, however, is that people tend to have a hard time recognizing when the herd is wrong, even when it’s obviously wrong. No other psychological test illustrates this more clearly than the Asch conformity experiments.

In the 1950s, the psychologist Solomon Asch conducted a series of experiments designed to test how often individuals went along with a majority opinion that was clearly wrong. The original experiment went like this: Eight participants were asked to complete a perceptual task in which they had to look at a “reference” line on a card. Another card had three lines on it, one of which was clearly the same length as the reference line.

The participants were asked to say which of the three lines matched the reference line. In reality, all but one of the participants were actors. The actors were instructed to sometimes uniformly give the right answer but other times uniformly give the wrong answer. Over a series of rounds, the results showed that the non-actor individuals tended to agree with the obviously incorrect majority opinion, at least some of the time.

Interestingly, the psychological pull of conformity can even affect people who are familiar with the design of the Asch experiment, as Freethink’s video shows.

“That intelligent, well-meaning, young people are willing to call white black is a matter of concern,” Asch wrote. 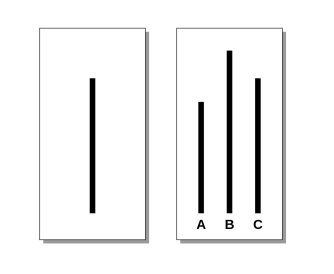 One of the pairs of cards used in the experiment. The card on the left has the reference line, and the one on the right shows the three comparison lines.Fred the Oyster via Wikipedia

The members of Reddit’s WallStreetBets community often call themselves “apes,” a joke that refers to how they often “ape into” investments without giving it much thought or just because others are also doing it. It’s a pretty accurate term when you consider how non-human primates make decisions.

To gain insights into the evolutionary roots of our own decision-making behaviors, researchers have trained primates like capuchin monkeys to trade coins for food and then studied how they spend the coins under various conditions. The results suggest that some primates seem to share several biases with humans, including:

But monkeys also exhibit another human bias when making economic decisions: conformity. Michael Platt, a neuroscientist and marketing professor at the Wharton School of the University of Pennsylvania, told Freethink:

Platt said the monkeys’ behavior is funny, sure, but also profound because similar studies on humans yield the exact same results.

“That’s really interesting to us, because it tells us that this behavior that we see in people — and that has enormous repercussions — it’s there from a heritage that we share with monkeys going back 25 million years,” Platt said.

Breaking from the herd

Our deep-rooted tendency to follow the herd is more of an evolutionary feature than a bug. We often benefit from following group signals, similar to a gazelle that takes off sprinting not because it sees a cheetah, but because it sees other gazelles sprinting.

The answer might be to slow down. Although our social brain network enables us to quickly glean useful information from the herd, that speediness comes at the price of accuracy. Put another way: If you’re consistently “aping in” on hype-driven stocks, you might make some quick gains, but you also might get caught holding the bag when the next stock market bubble bursts.

“In thinking about herding in bubble markets, I think it’s reasonable to suppose that if we could slow people down, that would allow more evidence to accumulate, and more likely to make a better decision,” Platt said.

Tags
behavioral economicscognitive scienceEconomics & Workmoneyneurosciencepsychology
In this article
behavioral economicscognitive scienceEconomics & Workmoneyneurosciencepsychology
Related
Life
Our antidepressant drugs are affecting animals and ecosystems
A toxicologist explains the impacts of antidepressants on fish — and no, they’re not getting any happier.
Sponsored
Want to boost your happiness? Buy experiences, not material possessions
Some experiences continue to pay dividends time and time again.
If money doesn’t buy happiness, you’re spending it wrong
These money experts say you can buy happiness. There are some red flags to look out for, though.
▸
7 min
—
with
Lindsay Bryan-Podvin
Thinking
“Give a f***, actually”: The surprising benefits of being grateful for things you dislike
Radical Emotional Acceptance calls on you to celebrate all of life’s emotions — even the negative ones.
Thinking
Visual thinking: How to understand the inner lives of animals
Humans are good visual thinkers, too, but we tend to privilege verbal thinking.
Up Next
The Past
Benjamin Franklin on vaccination and a deadly virus outbreak
Smallpox was nothing new in 1721.