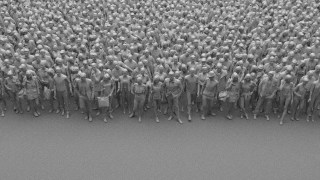 Why your brain wants you to follow the crowd.
▸
6 min
—
with
Big Think

NARRATOR: Money. It makes the world go round. It also makes us do irrational things. What if that's not entirely our fault? This neuroscientist is studying monkeys to find out.

MICHAEL PLATT: You can't take a monkey to, you know, Wall Street and put it on a trading floor. You know, that's kind of absurd. But what you do instead is we gradually train monkeys to respond to shapes of different colors that can mean you know, buying stock, selling stock, holding, et cetera. And what we found is that monkeys in a market where there's another monkey will tend to follow what that other monkey does. So monkeys tend to follow the herd, they copy each other and then they tend to buy, buy, buy, buy, buy and they get into a bubble and then they lose everything which is like, really hilarious but also, I think, really profound because in the exact same task using the exact same stimuli, these shapes, et cetera and we have people play that game we see the exact same thing happen.

That's really interesting to us because it tells us that this behavior that we see in people and that has enormous repercussions it's there from a heritage that we share with monkeys going back 25 million years.

NARRATOR: So how do we overcome millions of years of evolution and resist our impulse to follow the herd? This is your brain on money.

This is Michael Platt. A professor of neuroscience at the University of Pennsylvania. And he loves monkeys.

PLATT: When I was a kid, I was fascinated by monkeys. I would go to the zoo. I'd watch monkeys for hours. I just couldn't stay away from it because they were so similar to us and I could see some of the patterns of our own behavior in the way that these monkeys reacted to each other. And what we now understand from neuroscience in humans and now, in fact, from my own lab neuroscience in monkeys is that this tendency to follow the herd emerges from our social brain networks. The social brain network allows us to perceive other people and to make deductions about what they're thinking and feeling and those help guide our interactions with them. They help us to choose what to do. It allows us to navigate our social worlds. Sometimes learning useful information from others. Sometimes learning things that actually don't help us. Right, if everybody's going over that way because there's water over there then it actually makes complete adaptive sense to follow them. But if everybody's, you know, buying GameStop stock you can get caught in a bubble market and lose all of your money. That's not necessarily the most adaptive thing to do. The ability to cooperate with and learn from other people is really the key component of the human adaptive toolkit.

NARRATOR: To see just how adaptive we really are let's look at the Asch Conformity Experiment developed in the '50s by Solomon Asch. The premise is simple. Participants look at a series of lines and determine which of the three lines on the right matches the line on the left. The catch is that 4 out of the 5 participants here have been instructed to give the wrong answer. Everyone except Astryd. Things begin uneventfully as everyone gives their responses.

NARRATOR: But then something interesting happens.

NARRATOR: The continued influence of the group causes Astryd to begin to doubt her own eyes.

ASTRYD: Like, I'm familiar with the experiment and I still doubted myself. Everyone was so sure that I wasn't anymore.

NARRATOR: We see this same behavior in the real world all the time. Look at how we invest our money buy our homes and even shop. When we see the crowd act in a certain way our herd instinct is to follow.

PLATT: We are kind of naturally sensitive to what other people are doing because that provides information that could be useful to us that we didn't have to learn on our own. It just reflects the fact that most of us are really really dialed in to each other and we're dialed in because we have this social brain network that is there to make us dialed in to each other.

NARRATOR: So we have this instinct and it's not always useful. How can we overcome it?

PLATT: The way our brains make decisions is by iteratively collecting evidence and the more evidence you collect the more likely you are to make the right decision. So, you know, in thinking about herding and bubble markets I think it's reasonable to suppose that if we could slow people down that would allow more evidence to accumulate and they're more likely to make better decisions and they'll feel better about it afterwards. The human behavior that we see in these financial markets is very deeply baked in. It's not some psychological irrationality or anything like that. It's been wired in by 25 million years plus of evolution. It's part and parcel of being a primate.