Only 15% of the financial flows from Wall Street are directed to Main Street, according to Rana Faroohar, who inMakers and Takers: The Rise of Finance (2016) draws explicit attention to the increased ‘financialization’ of society. Where does the rest go? Much of it is recycled within Wall Street itself, in the buying and selling of existing financial instruments including stocks, bonds, derivatives, and real estate.

Faroohar offers a reminder that things weren’t always this way. For much of American history (the period 1790-1970), the financial sector was a “vital organ” in the economy but “not the central one”, because the emphasis of finance used to be funding business investments in the real economy. A historic exception to this was the 1920’s, when Wall Street funding was inwardly directed in speculative exercises, culminating in the Great Depression. 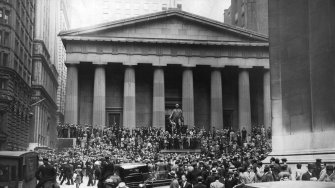 For much of American history (the period 1790-1970), Wall Street’s capital funded business investment in the real economy (Photo from Hulton Archive/Getty Images, 1929)

Faroohar argues that the present-day departure from finance’s traditional focus of funding initiatives on Main Street is in part what has caused a broad-based discontent with Wall Street’s practices. Furthermore, Wall Street’s size continues to grow, and while it was just 4% of the American economy in 1980, it now accounts for more than 7% of the total GDP.

Despite this, the financial sector does not create the same opportunities for mainstream America as it once did: it now takes in 25% of corporate profits, but accounts for only 4% of American Jobs. This means that the financial sector does not interact to the same degree with other forces in the economy, such that “wealth is no longer cycled into well-paying jobs that raise average living standards and provide security for ordinary Americans,” according to Wallace Turbeville of the non-profit Demos. 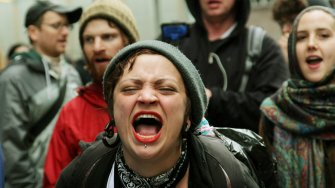 Only 42% of Americans aged 18 to 29 say they “support capitalism,” and only 19% of them self-identify as capitalists (Photo by Monika Graff/Getty Images)

As such, according to Faroohar, there is adeep-seated worry among the general population about Wall Street’s proposition to society, and that this explains why only 42% of Americans aged 18 to 29 say they “support capitalism”, and only 19% of them self-identify as capitalists.

Yet this issue is not relegated only to American capital markets. According to Adair Turner of the Institute for New Economic Thinking, it is now an international trend that financial systems do not “fund new capital investment but rather the purchase of already existing assets, above all real estate.”

Turner points out that this raises questions about the role of financial institutions as they are described in theory. In his words:

“Read almost any economics or finance textbook, and it will describe how banks take money from savers and lend it to business borrowers, allocating money among alternative capital investment projects.  But as a description of what banks do in modern economies, this is dangerously fictitious […] because the vast majority of bank lending in advanced economies does not support new business investment but instead funds either increased consumption or the purchase of already existing assets, in particular real estate and the urban land on which it sits.”

Former Chief Economist at the IMF, Raghuram Rajan, who foresaw the 2008 crisis, has argued that instead of addressing the deeper anxieties of downward mobility among the American (as well as global) middle class, financial institutions are offering credit as a kind of palliative.

In fact, given the traditional defense of a large financial sector as an efficient and unbiased allocator of capital in the economy, Adair Turner finds that “there is no evidence that advanced economies have become overall more efficient as result of the post-1970 increase in financial intensity”

The consequences on Main Street of all this stand in stark contrast to the spurt that Wall Street has experienced. As Farhoohar notes, lending to small business has fallen dramatically, and so has the quantity of startup firms. In the early 1980s, “new companies” accounted for half of all U.S. businesses, and yet “for all the talk of Silicon Valley startups, the number of new firms as a share of all businesses has actually shrunk.”

In light of these worsening trends, voices within the financial sector itself are now advocating the case for “a new and more inclusive type of capitalism, one that also helps businesses make better long-term decisions rather than focusing only on the next quarter,” according to Faroohar. Such internal calls for reform are an essential step in redressing the imbalance between Wall Street and Main Street, lest it continue to worsen.

If you’re trying to hide how you feel about something, be careful with your hands.
Up Next
Technology & Innovation

The Self in the World – Gish Jen – Think Again Podcast #88

Spontaneous talk on surprise topics. Novelist and essayist Gish Jen on how fundamental East-West differences in the sense of self play out in art, culture, business, education, and more.