My heart sank over the weekend when I heard the travel ban go into effect, barring people from seven predominantly Muslim countries, initially including green card holders. My wife is one. I wasn’t paying attention when I switched on the radio, which is why when the reporter said those three words, green card holders, they ripped through my heart like a knife. It was a visceral response. She’s from Flanders, the Dutch-speaking province of Belgium, which wasn’t included in the moratorium. The report soon informed me that we were okay. But it got me thinking.

A lot has been said about the impact to the economy, to science (a good number of scientists in the US are foreign born), how the ban will break up families, and increase the ranks of ISIS and other jihadi terrorist groups. Protests broke out across the nation and several judges blocked the travel ban in key cities, while a slew of organizations filed suit. Several State Department personnel even circulated a memo condemning the order.

Criticism flew in from conservative and liberal politicians in Congress, as well as many foreign heads of state. There were assuredly those who praised the move as well. The media however, pointed out inconsistencies including that Egypt, Lebanon, Saudi Arabia, and the UAE were not included, which were where the 9/11 terrorists came from.

Bloomberg News reported that these very countries are ones President Trump has business interests in. Pakistan wasn’t added to the list, even though this is where Osama bin Laden was found, and where Al Qaeda and Taliban fighters have been holed up. They are under pressure from the Pakistani army and Western forces. Plus, their power and influence has died down in recent years. 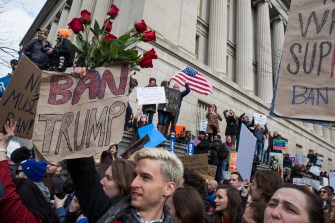 Protests broke out at airports and several other locations across the US after the travel ban was announced.

So how big is the threat really and how effective will the ban be? Years of watching 9/11 footage, that of the Boston Marathon bombings, and other atrocities, from every angle, has solidified jihadi terrorism as the number-one fear of a segment of the populace. But according to research by the New American Foundation, only 94 Americans were killed in such acts between 2005 and 2015, while 301,797 succumbed to gun violence. In fact, the biggest killers in the US aren’t terrorists but heart disease, cancer, car crashes, and gunshot wounds.

610,000 die each year on average from heart disease alone. A ban on fast food would save multitudes more than the travel ban ever could. 37,000 die in car crashes and almost 13,000 from gun violence. Meanwhile, the chances of being killed by an immigrant are one in 3.6 million, by a refugee terrorist one in 3.64 billion, and by an illegal immigrant one in 10.9 billion –all exponentially low.

Media saturation of such acts has altered our perception of the actual risk, giving those rare but poignant events more weight to secure viewership, but skewing our perception of reality. Perhaps now, the pendulum has swung back to center. Though one in two Americans, roughly, back the ban, a recent Reuters/Ipsos poll shows that only one-third feel safer because of it. 26% said they felt less safe.

However unlikely such an attack is, Trump’s travel ban could make America more vulnerable to such an attack, though in a statistical sense, albeit marginally so. One reason is that the majority of the attacks in Europe in recent years (and many in America) were by nationals inspired by ISIS. Such a ban may send some ISIS sympathizers over the edge. But that isn’t the only reason.

After the Brussel’s bombings last year, I learned that more foreign fighters who joined ISIS to fight in Syria came from Belgium than any other Western country. A whole generation of disaffected Muslim youth live there and in other parts of Europe. They are marginalized, discriminated against, and have few opportunities to better their lives. They are mostly second and third generation. As naturalized citizens, they would not be subject to the ban. 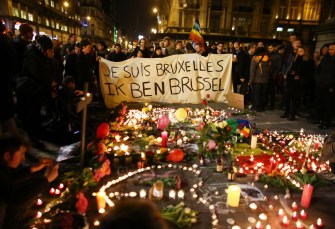 The Brussels attacks of 2016 revealed that integration difficulties in Europe may make some there vulnerable to radicalization.

I interviewed my wife’s good friend Tom last year after the Brussels event, who is a teacher at what is known as a “concentration school.” Though the majority of students from these areas are respectful, upstanding citizens, he’d had three students thus far run off and join ISIS, by the time the Brussel’s attacks occurred. Integration there is very difficult. Immigrant communities have a 50% youth unemployment rate. In Belgium, they are mostly of Moroccan and Turkish descent, not countries covered in the ban.

These second- and third-generation youth and young adults feel at home neither in their adopted homeland nor where their parents emigrated from. Yet, an ISIS-inspired, radicalized young man from one of these areas would not be subject to the travel ban, as long as he could get past screenings and hadn’t posted such beliefs online. Meanwhile, a middle-aged PhD student with pacifist tendencies from Iraq would be subject to it.

Another important point, Westy Egmont, director of the Immigrant Integration Lab at Boston College, told Reuters that the number of immigrants coming from these seven countries are relatively small. But it isn’t only about numbers. Hundreds of asylum seekers, students, employees, scientists, parents, business people, and many others are being inconvenienced at best, if not having their lives totally upended. Some have lost everything. Others may find their lives in jeopardy, and all over a ban that won’t work, that is bringing international and domestic condemnation, and is liable to make things worse.

So how do we stop ISIS-inspired attacks? To find out, click here:

Of course, it's all about where you move. The authors argue that it needs to be less populous regions.

Why Westerners and Easterners Really Do Think Differently

While pejorative stereotypes have been properly cast aside, the question remains whether there is a fundamental difference between how Eastern and Western societies are configured.