Researchers are continuing to unpack the reasons why extremists stormed the Capitol on January 6. Political scientist Robert Pape hypothesized that answers could be found in increasingly desperate economic conditions—the distance between the wealthiest and everyone else has never been so stark in America. As he dug into the data, however, a different story emerged.

The insurrectionists, he found, were predominantly from areas that feared immigrants and minorities are taking away rights and opportunities from white people. As Pape told the NY Times,

“If you look back in history, there has always been a series of far-right extremist movements responding to new waves of immigration to the United States or to movements for civil rights by minority groups. [The Capitol insurrectionists] are mainly middle-class to upper-middle-class whites who are worried that, as social changes occur around them, they will see a decline in their status in the future.”

Pape isn’t the only researcher contemplating the path from aggrievement to insurrection. A new study, published by the RAND Corporation, takes a detailed look at the indoctrination process through interviews with white nationalists, Islamic extremists, and their family members and friends.

The researchers set out with a basic set of questions to better understand the radicalization process in the hopes of developing prevention and intervention measures.

After poring over existing research, the team conducted 36 interviews, consisting of 24 former extremists, 10 family members, and two friends. Most of the subjects were active in this millennium, with six only active before the year 2000.

Often, these background characteristics weren’t enough. In over half the cases, there was a “reorienting event,” that is, a moment that “broke” them, such as being rejected from the military, experiencing long-term unemployment, or enduring a friend’s suicide. Propaganda was involved in 22 cases, predominantly through social media but also through books and music. Another factor was direct and indirect recruitment, with indirect recruitment being much more common. In other words, the individuals sought to join extremists groups. Social bonds played a role in 14 cases, including “graduating” from one organization to a more extreme group. 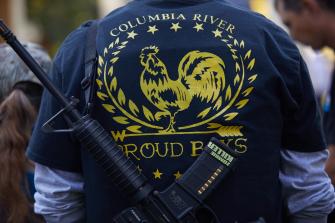 A Proud Boy member is armed with a gun labeled “Zombie Killer” as members and supporters of Patriot Prayer gather in Esther Short Park for a memorial for member Aaron J. Danielson in Vancouver, Washington on September 5, 2020. Credit: Allison Dinner / AFP via Getty Images

How to help extremists

Why do extremists quit? The most common reasons for leaving are feelings of disillusionment and burnout. Members grew disappointed by the failed promises of leaders or noticed hypocrisy among the ranks. Over half of the individuals were involved in failed deradicalization efforts, however, showing the resilience of these organizations even when family members and friends try to intervene.

The good news is that there is light at the end of the tunnel. An extremist isn’t a lost cause. The team lists important steps for helping extremists leave hate groups as well as for preventing people from being seduced in the first place. The researchers’ recommendations include:

The researchers note that this is a small study sample, so further work is necessary. Yet, these interviews offer a starting point for understanding the true scope of the problem. The reasons people become extremists are complex and multivariate. Preventing extremism therefore requires a holistic approach that addresses topics such as childhood education, poverty, mental health, ethnic and racial animosity, and the prevalence of propaganda.

Tags
global issuesgunsimmigrationpoliticspsychologysocial changesociologyterrorism
In this article
global issuesgunsimmigrationpoliticspsychologysocial changesociologyterrorism
Related
Health
What happens when regular porn watchers abstain for a week?
Researchers watched for signs of withdrawal — but didn’t find any.
Thinking
Why you should laugh at yourself, according to Seneca and Nietzsche
“It is more human to laugh at life than to lament it.”
Sponsored
4 misleading personal finance tips
Personal finance advice is often over-simplified and fails to consider economic research or people’s unique circumstances.
Thinking
Bonhoeffer’s “theory of stupidity”: We have more to fear from stupid people than evil ones
Evil is easy to identify and fight against; not so with stupidity.
Health
What decades of research tells us about living the good life
Warm relationships protect your mind and body from the slings and arrows of life.
Up Next
13.8
The universe has a Hubble constant problem
Differences in the way that the Hubble constant—which measures the rate of cosmic expansion—are measured have profound implications for the future of cosmology.