Unless you’re one of a fortunate handful of people, it may surprise you to learn that the world’s economy has not only recovered from the global financial meltdown of 2008, but has grown 27% since then, to $280 trillion, according to a new report from Credit Suisse Research Institute. (All graphics in this article are by Credit Suisse, and all figures are presented as USD or percentages.) 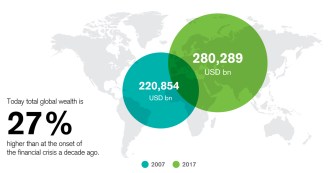 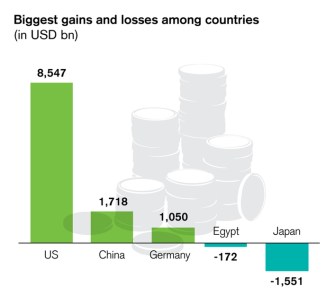 Interestingly, in terms of household income, Poland’s doing the best during this period. 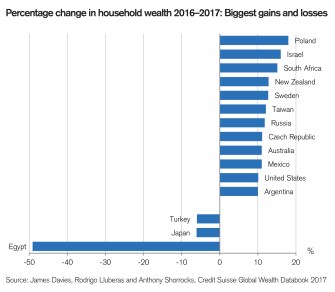 Here’s the distribution of money across the globe as it stands now. 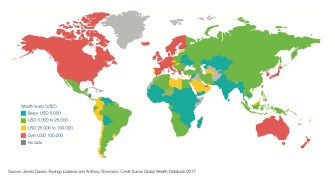 So if so much of the world — and the U.S. in particular — is rolling in money, why doesn’t life feel any easier for most of us? After all, Credit Suisse says there are 8,740,000 million new millionaires since 2008, and the average wealth per person has hit a new mean of $56,540.

The trick is in that word “mean.” That average figure includes everyone, including the wealthiest people. And there’s the troubling disconnect. It’s a big one, and it’s gotten worse since 2008. Right now just 1% of the world’s population — the aforementioned rich — own just over half, 50.1%, of all of the world’s wealth. That’s up from 45.5% in 2001. 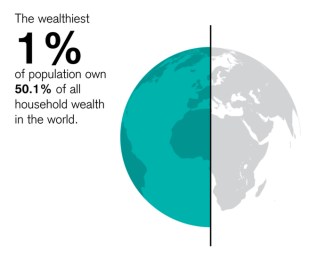 From 2000 to 2007, the wealth of the better-off half of the world grew by 7%, while everyone else’s worth grew by 12%. But the crisis upset that balance, reducing the world’s overall wealth by 12.6% and setting us down a path to ever-growing financial inequality during the recovery.

The report devotes an entire section to the disadvantages faced by those it calls the “unlucky millennials,” especially those in North America. Entering the job market during the high-unemployment aftermath of 2008, this group, particularly in their 30s, is struggling with often back-breaking student debt. 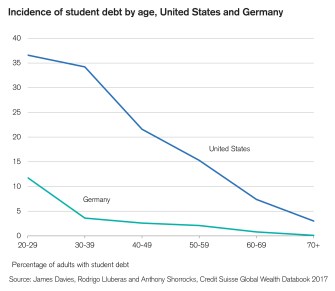 The Credit Suisse report summarizes, “Millennials are doing less well than their parents at the same age, especially in relation to income, home ownership and other dimensions of well- being assessed in this report. While Millennials are more educated than preceding generations…we expect only a minority of high achievers and those in high- effectively overcome the ‘millennial disadvantage.'”

For those who believe that more money for the top 1% means more jobs for everyone else, the Credit Suisse’s report should be eye-opening. It clearly suggests otherwise, with this group only accelerating their own acquisition of wealth.

A cartogram makes it easy to compare regional and national GDPs at a glance.
Thinking

Greed and the philosophy of wealth

When does a healthy desire for wealth morph into greed? And how can we stop it?
The Past

As bad as this sounds, a new essay suggests that we live in a surprisingly egalitarian age.
The Present

The US prison system continues to fail, so why does it still exist?
▸
18 min
—
with
Big Think
Strange Maps

The popular game has a backstory rife with segregation, inequality, intellectual theft, and outlandish political theories.
Up Next
Starts With A Bang

Ask Ethan: Could Matter Escape The Event Horizon During A Black Hole Merger?

Nothing can escape from a black hole… but could another black hole pull something out?Once you fall into the event horizon of a black hole, you can never escape. There’s […]