At a count of 2,754, there are now more billionaires on the planet than in any other time in history, according to a new report from wealth data company Wealth-X.

The world’s billionaire class now controls about $9.2 trillion in wealth, a 24 percent increase from 2016. The U.S. has the world’s highest billionaire count with 680—accounting for 25 percent of the world’s total—and was followed by China, which has 338. Asia saw the greatest uptick in billionaires and total wealth by region, though the report attributes most of that growth to Hong Kong and China.

Wealth-X attributes the increase of ultra-wealthy individuals to a powerful global technology sector, economic growth in Asian countries, and, in general, a “synchronized upturn in the world economy and climbing equity markets.” 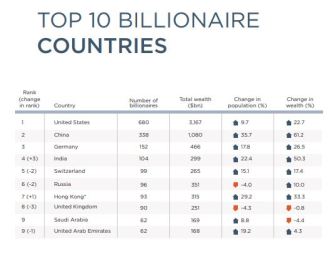 So, who’s the richest of the rich? In 2017, Amazon founder Jeff Bezos surpassed Bill Gates to become the world’s richest person, with an estimated net worth of $112 billion. Bezos is followed by Bill Gates, Warren Buffett, and fashion designer Bernard Arnault.

As billionaires around the world get richer, the median wealth of all U.S. households—$97,300 in 2016—hasn’t completely recovered from the Great Recession, before which the median was $139,700.