Tiny homes. They’re the watchword of the Home & Garden network, at once an Instagrammable, envy-inducing lifestyle and an unfortunate necessity for a generation struck by a recession, historically high inequality, and loans taken out for an ostensibly necessary education that’s failed to really net any benefits.

But the question is, which are they? A symbol of a smarter, more environmentally-conscious, humbler generation — or a symbol of one that’s had to make do with less than its predecessors? (See: “Millennials buy the things their parents did — but they’re much poorer.”) 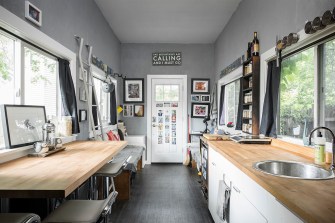 Will tiny homes look like this in the future — smaller and more efficient but still beautiful?

In the U.S., things are just bigger, and houses are no exception. The median size of a single-family home in the U.S. peaked in 2015 at 2,467 square feet. Compared to other parts of the world — particularly Europe — this is a massive figure. There’s a variety of reasons for this; one, for example, is that Americans began driving early and often, which transformed the design of their cities and suburbs. Developers could build outside of urban centers where the land was cheaper and more plentiful, enabling bigger houses to be bought.

In addition, the idea of having a lot of space seems to be an appealing one to the former European colonies — where Europeans have often lived in more cramped, repurposed older buildings, Australians, Canadians, and Americans had the opportunity to seize land (despite it already being occupied) and build new, sprawling settlements throughout it. The prosperity that the America saw in the 20th century didn’t hurt, either; why not build big if you’ve got the money to spare?

But a considerable amount of this space is wasted. A UCLA study found that the majority of people spend their time in the kitchen or around the television and very rarely use the living room or porch. As a result of these extra, unused spaces, more resources are wasted on construction, and energy consumption is double what a family would need if their house only had the rooms that they actually use.

Smaller, more energy-efficient houses are appealing to a growing population of minimalists and resource-conscious individuals. In 2017 alone, the sales of tiny homes increased by 67 percent. Coming in at under 400 square feet on average, these houses are also understandably cheap — for tiny homes on wheels, the average cost is $46,300, while those with a foundation cost on average $119,000. As a result, 68 percent of tiny homeowners don’t even have a mortgage. 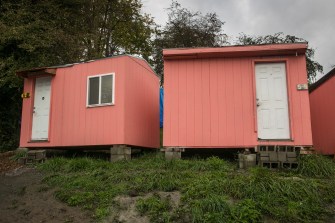 A community of tiny homes for homeless people known as “Nickelsville” in Seattle.

Downsizing out of necessity

On the other hand, the group of people drawn to tiny homes isn’t just homogenously composed of wealthy minimalists looking to reduce their consumption while still appearing trendy. In 70 percent of the U.S., the average worker can’t afford a home, one-third of adults are a $400 bill away from financial difficulty, and a quarter have no retirement savings whatsoever.

Under these conditions, downsizing may be the only viable method to survive. Consider, for instance, how cities such as Seattle, Detroit, and Denver are constructing tiny homes as emergency shelters or transitional housing for the homeless. There are also the many retirees that had their savings wiped out by the Great Recession who now live nomadically in RVs and modified vans. This tiny-living trend also has its Instagram cheerleaders, but the reality of it is less idyllic. Journalist Jessica Bruder and author of Nomadland related an anecdote to MarketWatch illustrating the nature of nomadic tiny living:

“I talked to one couple, Barb and Chuck. He had been head of product development at McDonald’s before he retired. He lost his nest egg in the 2008 crash and Barb did, too. One time, Barb and Chuck were standing at the gas station to get $175 worth of gas and the horror hit them that their account had $6 in it. The gas station gentleman said ‘Give me your name and driver’s license and if you write a check, I will wait to cash it.’ He waited two whole weeks before he deposited it.”

This might become a reality for more people in the future as well. Inequality widens when the rate at which wealth grows — say, your stocks or the price of your house — grows faster than the rate at which wages do. Research suggests that wealth is growing at a breakneck pace, keeping in line with economist Thomas Picketty’s prediction of a dramatically inequal future.

Solutions for this will need to be found, and many municipalities or private individuals may find such a solution in constructing tiny homes. Homelessness is a powerful, self-perpetuating force, and having shelter is an obviously necessary step to escape poverty.

Regrettably, if tiny homes are being driven primarily by resource-conscious but fundamentally economically secure individuals, we can expect the trend to remain just that; a trend. In a few years, fewer and fewer tiny houses will be constructed and sold, and eventually there will just be a small contingent of diehard proponents of the lifestyle. If, however, the tiny home trend is being driven primarily by economic inequality, then we can expect it to stick around for a while.

Paradoxically, we lose wars because the world is peaceful and the U.S. is powerful.
Up Next
Hard Science

Confirmed: Some dinosaurs did nest in colonies

An unexpectedly revealing find in Mongolia solves a longstanding riddle.