Skid Row is unlike any other sight you’ll witness in America. The city within the city — in a downtown, it should be noted, that is currently booming — represents a failure of social services, pay equity, and simple opportunity in every regard. And the problem is getting worse. Sixteen percent worse, according to new research.

It’s not only Los Angeles. Orange County has noted a 42 percent uptick in homeless residents, mostly due to new, more comprehensive counting measures. In nearby Alameda County, the number of homeless is up 43 percent; in Kern County, a whopping 50 percent. Further upstate, San Francisco’s homeless population has seen a 17 percent increase.

This issue has been especially problematic in downtown Los Angeles, where a housing shortage has led to skyrocketing prices of homes and rentals. California currently boasts seven of the top ten spots for studio and one-bedroom rentals in the nation; for two-bedroom rentals, it holds eight of the top ten slots. Los Angeles is tied for third in the 2019 “Most Expensive Cities To Live In” list. That is a global list.

The dichotomy between wealth and poverty living in close proximity is nothing new, of course. Silicon Valley is dealing with a serious RV problem as longtime residents are priced out of the cities wedged on the sliver of land between the San Francisco Bay and the Pacific Ocean.

While local officials are kicking RV dwellers out, Los Angeles officials are throwing their hands up in confusion. In 2015, the city council declared the homeless problem to be a state of emergency, allocating $100 million to housing and training citizens. Part of this money came from a local sales tax increase, Measure H, that is adding $355 million each year to combat homelessness. Still, the number of homeless rises.

Officials cite the housing crisis as the main driver of this problem, noting that to afford the average median rent here, Angelenos need to make $47.52 an hour. The countywide median family income is $69,300. You need to be pulling in roughly $100,000 to meet the median rent, causing Forbes to list LA as the worst city to rent in, given that residents pay an average 41 percent of their salary on rent.

And forget about buying a home. A stunning 92 percent of homes in Los Angeles are out of reach to the average citizen. 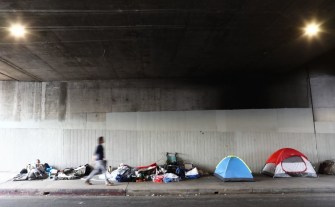 A man walks past a homeless encampment beneath an overpass in Los Angeles, California. The homeless population count in Los Angeles County leaped 12 percent in the past year to almost 59,000, according to officials.

Some organizations have taken measures into their own hands, such as by converting old hotels into low-income housing and homeless shelters. Yet the conversions aren’t quick or widespread enough to make an impact in the rising numbers of homeless. Combating homelessness in LA is often more sentimental than practical as neighborhoods battle the construction of low-cost housing and shelters when they are proposed.

Sadly, one of the groups most affected by this surge in homelessness is 18-24 year olds, increasing 24 percent over the past year. The “chronically homeless” — citizens with mental or physical impairments that have been homeless for over a year — jumped 17 percent.

According to one organization, Los Angles County needs to add 517,000 additional units of affordable housing to meet the demand. That number seems impossible in a city where every new building advertises luxury. In my Palms neighborhood, new one-bedroom rentals rarely list for under $3,000 a month.

Something is amiss. Unemployment rates are supposedly at record lows, yet hundred of thousands of Californians are living on the streets. The Wall Street Journal recently reported that U.S. job openings outnumber the number of unemployed by the widest gap ever. Many jobs available plus many homeless should be easy math. The numbers aren’t adding up — especially on the streets of Los Angeles.

A new study looks at what happens when you get infected with two viruses at the same time.
Up Next
Neuropsych

GPS is changing your brain (and it’s not good)

Creating more neural circuits through visual landmarking not only benefits your spatial orientation, it could keep Alzheimer’s disease at bay.